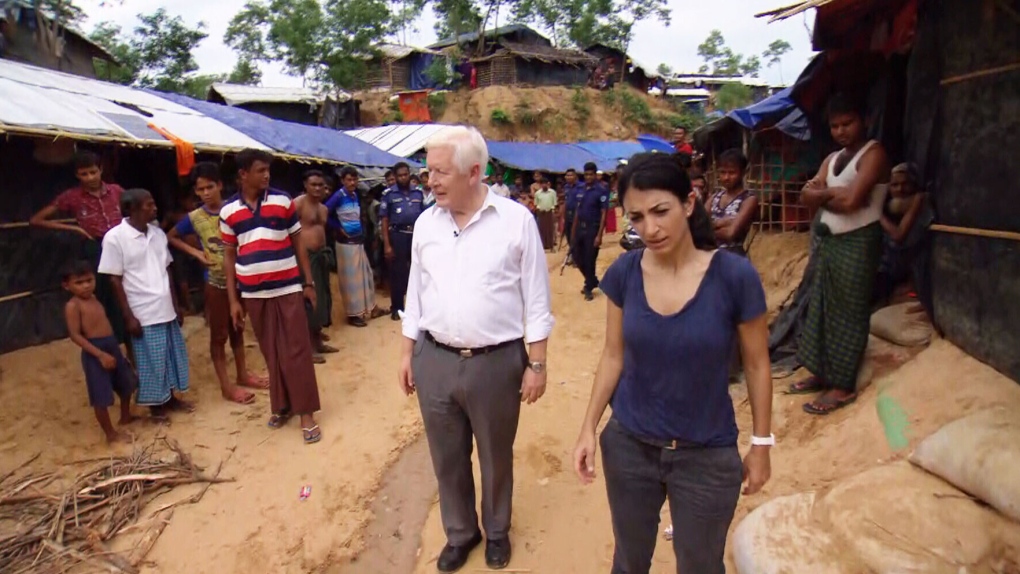 OTTAWA -- Veteran politician Bob Rae says he will return as Canada's special envoy for Myanmar to help build support for a genocide lawsuit against that country's government over its forced expulsion of more than 700,000 Rohingya Muslims.

Rae, a lawyer who is a former interim Liberal leader, said he has been working behind the scenes on the Rohingya issue, which included a meeting with Gambia's justice minister at an international conference 10 days ago.

That's where Rae received a heads up on Gambia's decision on Monday to file a genocide application against Myanmar with the International Court of Justice in The Hague on behalf of the Organization of Islamic Co-operation, a group of 57 Muslim countries.

Foreign Affairs Minister Chrystia Freeland said in a statement the move will advance accountability for the crime of genocide, which includes mass murder, systemic discrimination, hate speech and sexual and gender-based violence. The Canadian government will look for ways to support Gambia's legal efforts and has enlisted Rae's help.

"Minister Freeland has talked to me about it, and she's asked me to stay on as a special envoy. Part of my mandate will be to discuss about how Canada might support the Gambian application, but also how we might broaden that support," Rae said in an interview on Monday. "I've been working sort of behind the scenes on it and now I expect to be doing a bit more work on it."

Rae said he won't know his exact marching orders until after a new cabinet in sworn in on Nov. 20. But he said he has consulted with Canada's ambassador to the UN, Marc-Andre Blanchard, and recently met with Abubacarr Tambadou, Gambia's justice minister.

"He advised me at that time that this was something they were working on and I indicated to him before the election was called, I had told the government that I thought that we needed to develop a strong internal process to look at the ICJ as a possible venue for an application," said Rae. "To my knowledge, that advice was accepted."

Under the 1948 Genocide Convention, parties to the agreement can ask the International Court of Justice to rule on potential violations. Myanmar is a party to the convention. The court can offer opinions and conclusions, "but it doesn't tie the conclusion to the responsibility of particular individuals," Rae said.

"Although it does provide for the ability to search and seek some remedies," he said.

"The thing that continues to be frustrating for the Rohingya is that it's not immediately clear that once there's a finding, what is the result or impact of that."

Myanmar is not a party to the Rome Statute that created the International Criminal Court, an institution that Canada helped create in the late 1990s following the genocides in Rwanda and the former Yugoslavia earlier in the decade.

Rae said the current legal action was a stepping stone of sorts in international legal circles.

"It's all about building the arguments," he said. "The world can't keep looking at its shoes on this stuff. It requires greater attention."

Rae, in his report on Myanmar released last year, urged Canada to play a leading role in any international prosecution of the perpetrators of violence in the South Asian country.

Rae also predicted legal challenges for the international community if it pursued a prosecution against Myanmar's leaders for crimes against humanity.

The main challenge would be to create a credible and independent tribunal that could hear the case, he said, noting that special tribunals were set up to prosecute war crimes in Cambodia, Rwanda and the former Yugoslavia.

In September 2018, the House of Commons unanimously supported a motion calling the crimes against the Rohingya a genocide. The motion also reiterated a call for the UN Security Council to refer Myanmar to the International Criminal Court.

The motion coincided with a United Nations fact-finding mission that reported the Myanmar military systematically killed thousands of Rohingya civilians, burned hundreds of their villages and engaged in ethnic cleansing and mass gang rape. It called for top generals to be investigated and prosecuted for genocide.

A statement on Monday from Human Rights Watch on behalf of 10 international non-governmental organizations said the move by Gambia represented "the first judicial scrutiny of Myanmar's campaign of murder, rape, arson, and other atrocities against Rohingya Muslims."

It noted that Canada, Bangladesh, Nigeria, Turkey, and France "have asserted that Myanmar committed genocide against the Rohingya."

"Canada will work with other like-minded countries to end impunity for those accused of committing the gravest crimes under international law," Freeland said.

In October 2018, Canada also stripped Aung San Suu Kyi, Myanmar's civilian leader, of her honorary Canadian citizenship for her complicity in the atrocities. She had been renowned for her decades as a leader peacefully opposing her country's military rulers.

Myanmar's military launched attacks against the Rohingya in August 2017. Most fled to neighbouring Bangladesh and have created one of the world's largest refugee camps.