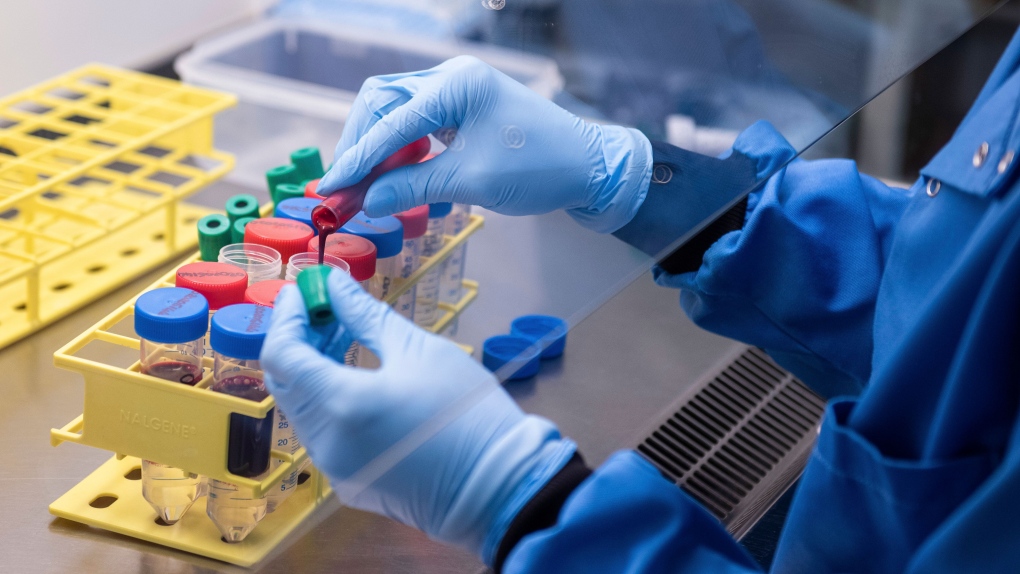 In this handout photo released by the University of Oxford blood samples from coronavirus vaccine trials are handled inside the Jenner Institute in Oxford, England Thursday June 25, 2020. Scientists at Oxford University say their experimental coronavirus vaccine has been shown in an early trial to prompt a protective immune response in hundreds of people who got the shot. In research published Monday July 20, 2020 in the journal Lancet, scientists said that they found their experimental COVID-19 vaccine produced a dual immune response in people aged 18 to 55. (John Cairns, University of Oxford via AP)

Procurement Minister Anita Anand also said Tuesday that Canada is in line to secure up to 150,000 vials of Gilead Sciences and McKeeson Canada’s antiviral drug remdesivir, to treat the virus.

To date, Canada has allocated $1 billion to vaccine procurement, which translates to a minimum of 154 million doses of a future vaccine. Deals have already been signed with Pfizer, Moderna, Johnson & Johnson, and Novavax.

To be approved for use, any potential vaccine must move through a well-established testing process that involves three phases of clinical trials. The first and second phases focus on monitoring whether the drug produces the desired response from the human immune system. The third phase involves far more test subjects and aims to determine whether the vaccine candidate is actually able to stop the virus from infecting a body.

Sanofi and its partner GlaxoSmithKline, providing adjuvant technology, entered into Phase 1 and 2 of clinical trials in early September with 400 participants. Pending results, the company will move into Phase 3 by the end of 2020.

None of the above candidates have been approved by Health Canada.

"These vaccine contracts ensure that Canada has access to the three main types of vaccine candidates known as mRNA, protein subunit, and viral vector. Having a diverse portfolio of vaccines from multiple supply sources will provide assured access to safe and effective COVID-19 vaccines when they become available," said the minister.

Anand has indicated that the government is also in talks with British multinational pharmaceutical AstraZeneca, which at one point was poised to have the most promising candidate until trials were halted in early September when a volunteer showed side effects. The company has since announced it was resuming trials.

At the same time, Canada is finalizing the details of its partnership with COVAX Facility, an international alliance to advance COVID-19 tests and vaccines co-lead by Gavi, the Coalition for Epidemic Preparedness Innovations and The World Health Organization.

Prior to Tuesday’s announcement, the government had kept vaccine spending under wraps, citing a concern about maintaining competitiveness in future negotiations.

Asked why the approach has seemingly changed, Anand said "what we’ve done today is to take an aggregate number of funds expended on the base number of doses across five contracts so as not to undermine potential negotiations moving forward."

She added that the government has confidentiality agreements with a number of suppliers, which is why more specific contractual detail hasn’t been released.

"I want to highlight how complex these negotiations are and how sensitive the data are in terms of our procurements but we did want to come forward with an aggregate amount today."

Contracts have also been penned with SiO2 for orders of vials and syringes to fill 80 million doses.

Amir Attaran, a professor in the faculties of Law and the School of Epidemiology and Public Health at the University of Ottawa, says the announcement is "extremely underwhelming."

"Of all the pharmaceutical companies [putting forward vaccine candidates], Sanofi is dead last, in terms of its progress on clinical trials," he told CTVNews.ca.

A number of the members on the COVID-19 Vaccine Task Force have had professional dealings with Sanofi. Mark Lievonen was the former president of the Canadian vaccine division of Sanofi, while Michel De Wilde was the former senior vice-president of research and development.

Asked whether these individuals recused themselves of decision-making related to the Sanofi contract, John Power, a spokesperson on behalf of Innovation, Science and Industry Minister Navdeep Bains said the Task Force will now publish a registry of declared interests.

"The registry will be updated on the NRC’s website following each vaccine announcement that is based on a Task Force recommendation," reads the emailed statement.

"All Task Force members are committed to ensuring the integrity of the advice they provide. Members will continue to recuse themselves from providing advice on projects where there is a conflict. The process is consistent with the practices of other volunteer external advisory bodies to government and embodies international best practices."

In a copy of the declaration of interests, it reads that Lievonen’s past employment is not a "direct, material conflict" but nevertheless he recused himself of deliberations and recommendations. Meanwhile, De Wilde was absent from the related meetings.

It also states that member Dr. Benjamin Rovinski worked at the company for over 20 years and also removed himself from discussions. Dr. Joanne Langley has collaborated with the Canadian branch of Sanofi through the university she works at but has no financial interests in the arrangement and was a consultant to the company on influenza vaccines in 2018. Recusal was not deemed necessary.

Attaran has been vocal about his disapproval of the government’s overall vaccine procurement strategy in the past, suggesting that because Canada was slow to act, we’ll be punted to the back of the line when a vaccine is made available.

He suggests Canada should develop a vaccine in-house instead of relying on production capabilities elsewhere.

"Either we create a new line ourselves or we hope that someone in the line ahead of us lets us cut in. Those are really the only two ways," he said. "We don’t need to reinvent the wheel from scratch. If you get the starter seed from AstraZeneca, and the how-to from [them], well it’s kind of like sourdough and that would be the totally sensible thing to do."