Canada's top CEOs made on average $50K by 11am, report suggests

OTTAWA – Before your mid-morning coffee break on Tuesday, the top 100 CEOs in Canada will have made what an average worker will earn in all of 2018, a new report finds.

According to a report from the left-leaning think tank Canadian Centre for Policy Alternatives (CCPA) top Canadian executives are raking in pre-2008 economic crisis levels of pay, widening the income gap further.

In 2016, Canada's top 100 highest-paid CEOs on the S&P/TSX Composite index made 209 times the average annual income of working-class Canadians. The CEOs averaged $10.4 million a year, compared to the average Canadian income of $49,738.

The eleventh in a series of reports on executive pay in Canada is called "Climbing Up and Kicking Down." The CCPA has tracked executive pay for the last decade as one metric to gauge income inequality. 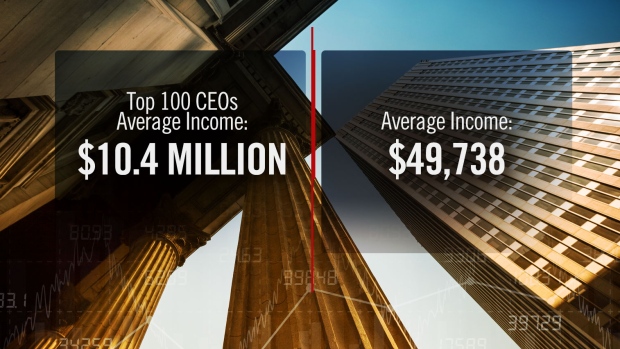 Author of the latest report, David Macdonald, a senior economist with the CCPA, says this is the first time the ratio of CEO pay to average worker pay in Canada has outpaced 200:1, up from 193:1 in 2015.

The economist said the disparity is due, in large part, to the way CEOs are paid. Only about 10 per cent of their pay is from salaries and wages, while the other 90 per cent is related to the share price of the company they manage, Macdonald said.

The report argues that if these companies can afford 8 per cent pay increases for their top level staff, then there shouldn’t be any issue affording a minimum wage increase for the average worker.

If workers were making a $15 an hour minimum wage, they would still have to work for an entire month to make what the top executives earn in one hour: $2,489.62.

Ian Lee, a management professor at the Sprott School of Business at Carleton University, tells CTV News Channel that he believes Canadian CEOs earn their pay.

It’s methodologically flawed to suggest that CEOs “are comparable to you and me,” according to Lee.

“(CEOs) have a disproportionate impact on the economy, on the company, on society that the average person does not have,” he said.

The report advocates for the federal government to consider closing more tax loopholes to curb the growth in CEO pay.

In terms of demographics, the CCPA said there were only three women in the list of top 100 CEOs.

“It is not at all representative of the Canadian population,” Macdonald said. “At the very top of corporate Canada, it is a very insular, very male-dominated group and that picture just isn’t changing.”

Highlights from the study, which was based on 2016 income data, include: