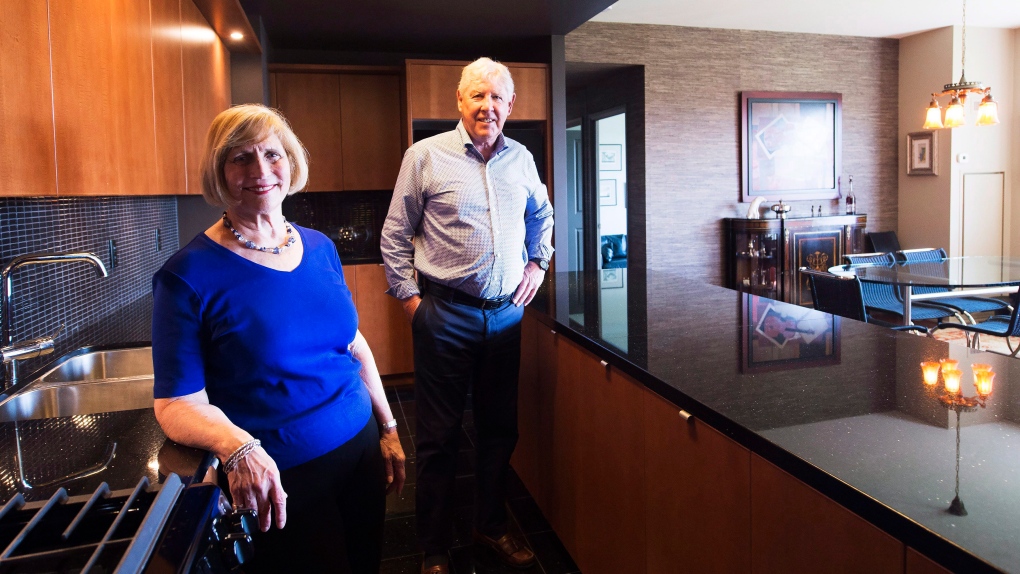 Roz Holden, 72, and her husband Bob Holden, 73, pose for a photograph in their condo in Toronto on Thursday April 27, 2017. (THE CANADIAN PRESS/Nathan Denette)

OTTAWA -- Aging baby boomers are once again getting the lion's share of attention as they swell the ranks of the oldest people in the country.

New census data released Wednesday by Statistics Canada showed Canadians over the age of 65 now outnumber those under the age of 15 for the first time.

However, one expert says it's not just newly minted senior citizens who should be on the radar screen. It's those who are over 85, a group that grew almost 20 per cent in the last five years.

"This is a population that we haven't paid a tremendous amount of attention to," said Colin Busby, associate research director for the C.D. Howe Institute. "I'm talking about those 85 and up or those 100 and up."

There were 8,230 people at least 100 years old, a group that grew 41 per cent compared with five years earlier.

"We're likely to continue to see that kind of expansion," said Busby. "This is very interesting for a whole number of reasons."

As populations age, the health issues related to aging, including dementia, will grow. Higher proportions of people over the age of 85 also live alone, most of them women. Busby said it struck him there are almost twice as many women as men among those over 85. Many of those would have cared for a spouse until their death, but now have to rely on their children or government supports if they want to stay in their homes.

That includes help even just for basic tasks such as buying groceries, cooking and doing laundry, he said.

"The demographic issues in that group are acute, they're ongoing," said Busby. "We still don't have very good solutions to helping out people in those age groups maintain their autonomy and maintain their ability to live in their homes as long as they would like. It points to some obvious weaknesses in how we have designed our health-care policies and social policy systems."

Health Minister Jane Philpott said the population growth among older Canadians is "something to be celebrated.

"Aging is a good thing, and the fact that we're all living longer is very good news for Canadians, reflects the fact that we have an increasingly healthy population and it's great that people are living longer," she said. "It does, of course, raise concerns as it relates to the sustainability of our health-care system, but there is no reason for panic."

Philpott said the government has policies to help, including investments in housing and home care. Ottawa is spending $6 billion over the next decade to provide the provinces with new funding for home care programs.

Much of the discussion among policy-makers following Wednesday's census release was about when Canadians retire and what can or should be done to encourage people to work longer, in order to maintain a tax base and workforce able to pay for the growing needs in government programs for an aging population.

The previous Conservative government in 2012 proposed a plan to increase the pension eligibility age to 67 from 65, with a phased-in increase starting in 2023. In 2016, the new Liberal government scrapped that plan.

Although the Liberals' economic advisory council recommended earlier this year that eligibility for both old age security and the Canada Pension Plan be raised to at least 67, Social Development Minister Jean-Yves Duclos indicated Wednesday the government isn't going back down that road, saying there are incentives to work longer, but the programs will be there at age 65 for workers who need it then.