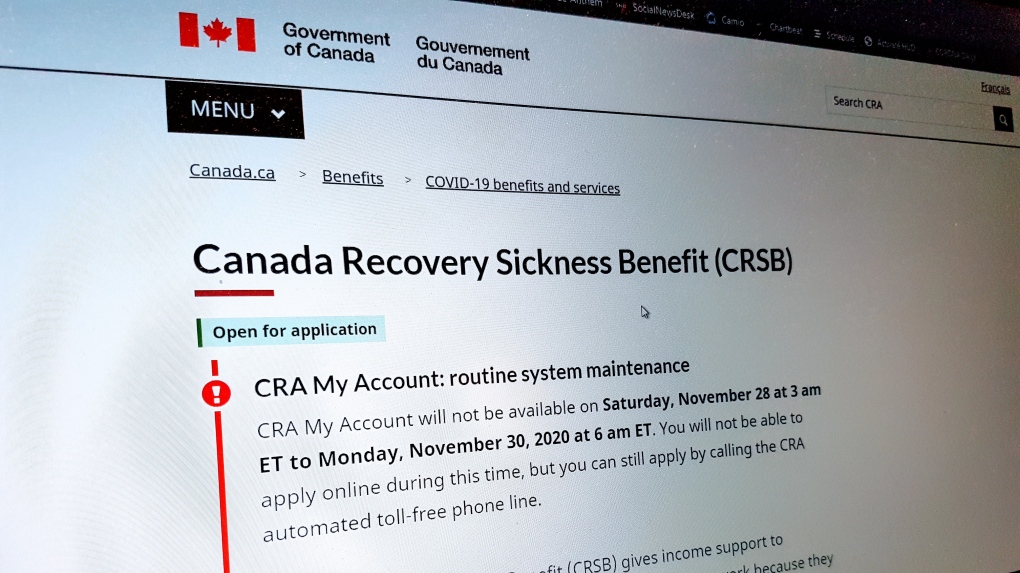 OTTAWA -- Canadians who have been forced to stay home and miss work because of COVID-19 have been able to apply for financial assistance from the federal government since early October, but new numbers suggest uptake of the new sickness benefit has been slightly slower than anticipated.

First unveiled this summer, the Canada Recovery Sickness Benefit (CSRB) provides $500 per week for up to two weeks, for workers who are sick or must self-isolate for reasons related to COVID-19, or have underlying conditions that would make them more susceptible to COVID-19.

New data provided by Employment and Social Development Canada shows that from the time the program opened on October 5 to November 22, 295,000 successful applications have been filed on behalf of 177,000 people.

Most of those applications, roughly 134,000, were submitted and approved in the first two pay periods, with the number of applications declining each pay period after.

“The Government knows that the actual number depends on the evolution of the pandemic,” Isabell Maheu, a spokesperson for Employment and Social Development Canada, wrote in an email.

When the program was announced the federal government anticipated 4.9 million people “could apply” for the benefit over its one year duration from September 27, 2020 to September 25, 2021. The Canadian Revenue Agency says it does not track how many applications have been deemed ineligible or abandoned.

A senior researcher at the Canadian Centre for Policy Alternatives, Ricardo Tranjan, says that while it is difficult to analyze the number of applicants in the program’s first two months, he says the data provides an insight into how many Canadian workers are falling through the cracks when it comes to sick leave.

“The federal government was aware that a large share of the Canadian workforce wouldn’t have access to any paid sick leave and so they created this backstop program that may be been slightly more complicated, but at least it is there,” Tranjan said.

Tranjan says if the government wants to bolster its numbers, the program should be streamlined, making it less complicated to apply and easier to qualify.

“This is just a very small, relatively small share of the universe of workers who at any day and any month do not have coverage,” he said.

The NDP, who pushed the federal government to implement a paid sick leave program, say applications do appear slightly lower than initially anticipated. The party says the early data underscores a need for the federal government to better advertise the programs to workers who might not know the benefit exist. The NDP also say the sickness benefit could be easier for workers to access.

“There is lots of evidence that people are still going to work sick because they feel they have no choice,” said Melanie Richer, a spokesperson for the NDP. “Public health experts have said that COVID-19 is being spread at workplaces … We also want to see permanent changes to provincial and federal labour laws to make paid sick leave permanent and ensure workers can’t be fired for taking it.”

The sickness benefit was released as part of a larger $37-billion COVID-19 aid package that included the extension of the Canada Emergency Response Benefit and the revamping of the EI program to give more financial assistance to people impacted by COVID-19.

While the PBO does say the recent trend suggests the total number of applicants for 2020-2021 is “likely to be slightly under budget,” Giroux anticipates rising cases counts across the country will lead to more applications this winter.