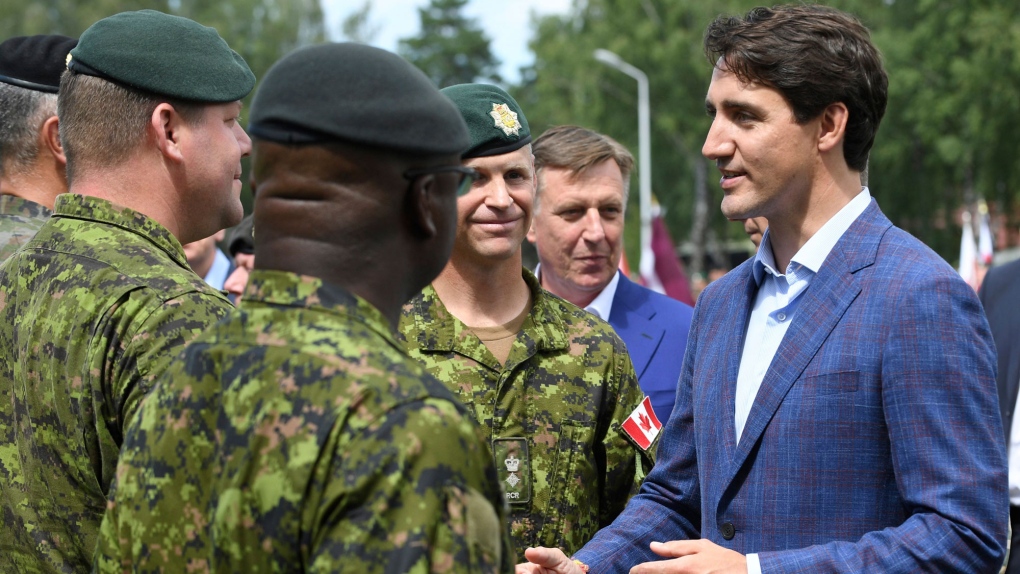 Prime Minister Justin Trudeau, right, speaks to troops as he visits Adazi Military Base in Kadaga, Latvia, on Tuesday, July 10, 2018. Trudeau says he hopes the upcoming NATO summit will send a message of broad support for unity and solidarity but acknowledges that there will "no doubt be calls for greater investments in defense spending", a key issue that is badly dividing the military alliance.(AP / Roman Koksarov)

BRUSSELS -- U.S. allies in Europe and Canada have increased defence spending for a sixth consecutive year but most of them will still fail to achieve a NATO spending ambition by the target date of 2024, according to new figures being discussed by defence ministers on Thursday.

NATO countries slashed their military budgets in the 1990s after the Cold War, but they were spurred back into action when Russia annexed Ukraine's Crimean Peninsula in 2014. That year, the allies pledged to halt the cuts and move toward spending 2% of their gross domestic product on defence by 2024.

According to the new data, France and Norway are forecast to join eight other countries spending at least 2% of their GDP on defence this year. Those others are Britain, Estonia, Greece, Latvia, Lithuania, Poland, Romania and the United States -- which has a bigger budget than all 29 of its allies combined.

But the other 20 allies will not make the cut, according to the projections. Their spending ranges from just below 2% in Bulgaria, Croatia, North Macedonia, Slovakia and Turkey to less than 1% in Luxembourg. Canada and Italy are forecast to spend just under 1.5% this year.

The figures were being discussed Thursday by NATO defence ministers at a two-day videoconference.

Given that gross domestic product varies with economic growth, the impact of the coronavirus, which has ravaged world economies, probably plays a large part in pushing France and Norway over the 2% bar this year.

The 2% metric concerns only national defence budgets -- what each country spends to meet the needs of its own armed forces -- and has nothing directly to do with NATO itself. None of the 30 allies owes NATO or its members money. But bigger defence budgets mean that countries can do more together on their collective security.

Since coming to office in 2016, U.S. President Donald Trump has had an almost obsessional focus on defence spending and berated allies for falling short. Early in his term, he suggested that the United States might not come to the aid of an ally in trouble if its defence budget wasn't big enough.

"We're pleased that we are seeing this go in the right direction. We still have a lot of work to do, but since the last six years, I guess, we have increased spending by our European and Canadian allies by $130 billion, and we know that that is going to continue to increase through the year 2024," she said.