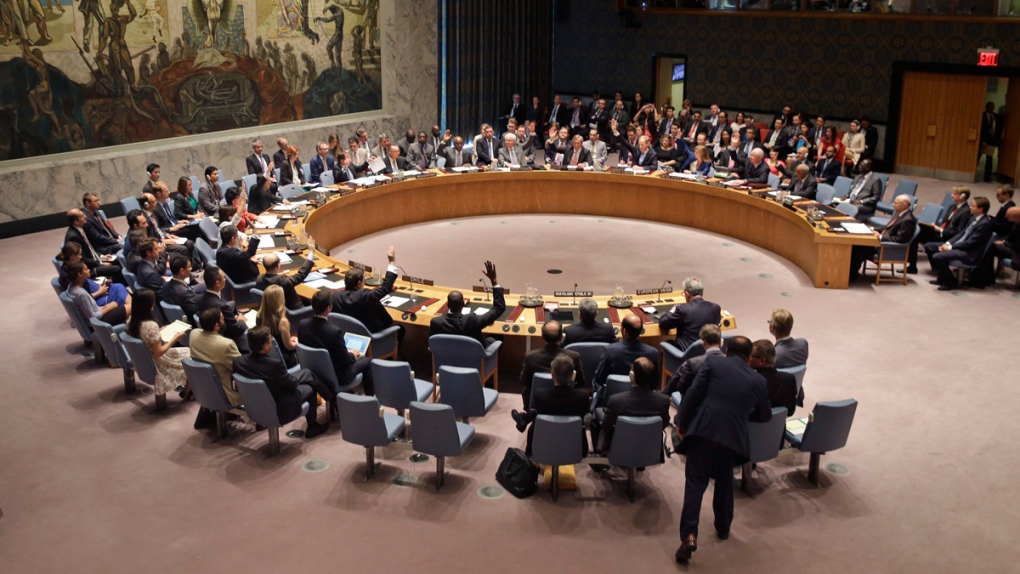 OTTAWA -- The COVID-19 pandemic ended the secret handshakes and deal-making in the world's power corridors, but Canada's campaign for a temporary seat on the United Nations Security Council is full steam ahead.

They say Canada's voice on the world's most powerful decision-making body is needed more than ever because of the big decisions that lie ahead in managing the pandemic and its aftermath.

Canada faces tough competition from Norway and Ireland for the two available seats for a temporary two-year term that would start next year.

Both countries are viewed widely as having an advantage because they spend far more than Canada on international development to poor countries and have far more military personnel deployed on UN peacekeeping missions -- two key issues for UN member countries.

Champagne and Gould say that Canada's international stature has grown because of its response to the COVID-19 outbreak, which so far includes a $50-million foreign aid package, but some ex-diplomats say Canada needs to spend more in that area to win votes.

"The UN Security Council is the body that determines how the world reacts to issues of global security and instability," said Gould, adding that it has never been more important to have a "rational voice" on the 10 rotating, non-permanent members of the council.

"It just demonstrates why it is important for Canada to sit on the UN Security Council. That campaign carries on, but in a different way."

After taking part in a teleconference with fellow G7 foreign ministers this past week, Champagne said Canada's membership in that exclusive club of leading nations would help it in the ongoing UN campaign.

"Canada has been chairing or organizing a number of calls with G7 countries," he said. He said Canada has "a voice that is much needed in the world where we need to co-operate, co-ordinate and work together. I think Canada brings something unique to the table.

"I think more and more countries want to see their voice amplified through Canada."

That includes during the pandemic itself, he said, "but also once we will be in the post-COVID world (we) will need countries like Canada to be there."

Canada's international credibility has also risen in recent months because of the role it has taken in leading the quest to get answers from Iran about its January downing of a Ukrainian passenger plane, as well its recent completion of a new North American trade deal, said Colin Robertson, a seasoned ex-diplomat.

"The new responsibilities of middle-power status, especially G7 and G20 membership, differentiates us from Norway and Ireland," said Robertson, vice-president of the Canadian Global Affairs Institute.

Canada's shortfalls in peacekeeping and foreign aid remain a crippling factor in the UN bid, but the COVID-19 crisis gives it an opportunity to make up for it that, said Stephen Lewis, Canada's UN ambassador in the 1980s.

Canada received negative reviews for its "brief peacekeeping mission in Mali" and for pulling out earlier than the UN wanted, said Lewis, who remains active in UN circles as one of the leaders of an international organization trying to stamp out abuse by peacekeepers.

"Although Canada may consider that trivial, it registers deeply with the international peacekeeping community around the world, countries whose vote Canada would want," said Lewis.

That can be rectified by giving cash -- "several hundred million" -- to the African Union for its peacekeeping operations and increasing its foreign aid contribution to COVID-19 well beyond the current $50 million, which Lewis calls, "woefully inadequate." He said Canada's fair share would be $140 million at minimum.

Spending matters more than ever, especially during the pandemic, and especially in Africa where 54 of the UN General Assembly's 190-plus countries hold a crucial bloc of votes in the Security Council election, said Bessma Momani, an international affairs expert at the University of Waterloo.

"If I were an African government expecting COVID-19 to knock on my door any minute now, maybe if you're choosing between Norway and Ireland, I would use that as leverage ... If you want me to vote, where's my help?" said Momani.

Canada should campaign to address a more pressing need at the Security Council -- the fact that it has been missing in action in combatting the pandemic, according to the Canadian-led World Refugee Council. Its leading members include former UN ambassadors Allan Rock and Paul Heinbecker, and Lloyd Axworthy, Canada's foreign minister when the country last served on the council two decades ago.

"The Security Council's silence is a troubling symptom of the deep dysfunction that has beset its 15-member body in recent years," the group said in a statement.

"As Canada campaigns for one of those seats in this year's election, it should pledge in its platform to bring the Security Council back to life and face up to its responsibilities."

The pandemic raises questions about whether the General Assembly, whose members are to hold a vote in June, will be able to meet to hold an election.

The Security Council has been meeting recently via video conference so it is conceivable that the General Assembly could convene that way in June, said Adam Chapnick, a Royal Military College professor and author of a new book on the Security Council.

"That said, there is a real chance that this pandemic will be significantly worse (at least in the global south, where it is only beginning) in a few months, so I suspect that we will be in unprecedented territory by the time the meetings are supposed to be held," Chapnick said.

"Still, I can't imagine that an election won't be held, because the seats do have to be filled."