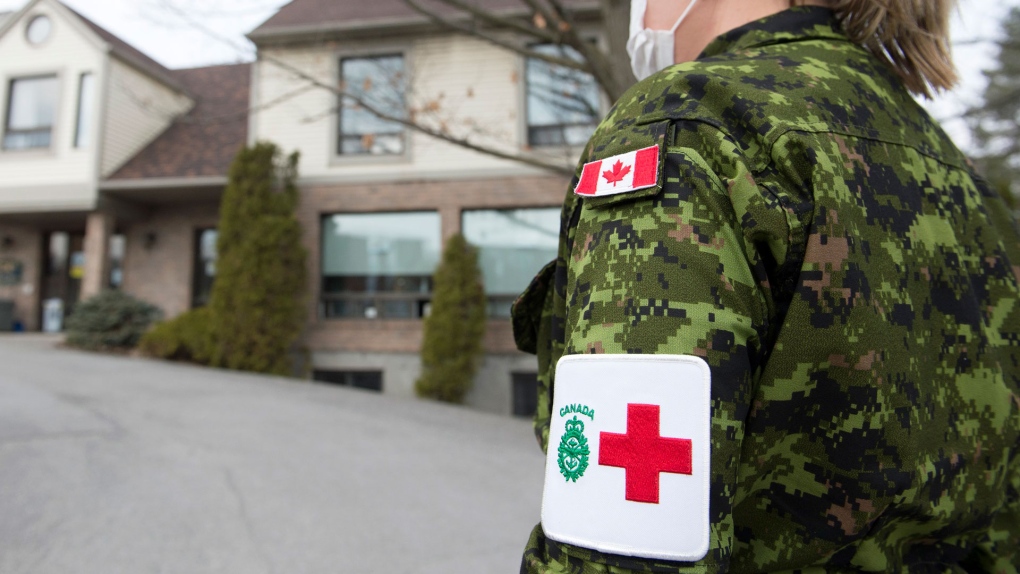 A member of the Canadian Armed Forces is shown at Residence Villa Val des Arbres a long-term care home in Laval, Que., Sunday, April 19, 2020, as COVID-19 cases rise in Canada and around the world. THE CANADIAN PRESS/Graham Hughes

OTTAWA -- Canada has taken a big leap closer to meeting its promise to the NATO military alliance to spend a larger share of its economy on defence thanks to an unexpected assist from COVID-19.

New NATO figures released Wednesday show that largely thanks to the pandemic, Canada is poised to spend the equivalent of more of its gross domestic product on defence this year than at any point in the past decade.

That is because the alliance expects the Liberal government to hold Canadian defence spending steady even as COVID-19 batters the country's economic output.

Yet defence analyst David Perry of the Canadian Global Affairs Institute says the results are unlikely to appease the United States, as Canada continues to fall far short of its promise to NATO to spend two per cent of GDP on defence.

“I think they'll be pleased to see positive momentum,” Perry said of the U.S., “but it doesn't resolve their concern about where we are.”

All NATO members, including Canada, agreed in 2014 to work toward spending the equivalent of two per cent of their GDP - a standard measurement of a country's economic output - on defence within the next decade.

The promise followed complaints from the U.S. about burden-sharing among allies and broader concerns about new threats from Russia and China as the two countries increased their own military spending.

NATO and the U.S. have repeatedly criticized Canada for not meeting the target, with President Donald Trump in December calling Canada “slightly delinquent” during a meeting with Prime Minister Justin Trudeau.

His predecessor, Barack Obama, also called out Canada over its defence spending during an address to Parliament in 2016. The U.S. spends more than any other NATO member on defence, both in terms of raw cash and as a share of GDP.

NATO Secretary-General Jens Stoltenberg on Wednesday said the continued importance of increasing military spending would be discussed when defence ministers from across the alliance meet this week.

The NATO figures show that Canada is poised to spend 1.45 per cent of its GDP on the military this year. That is not only a big jump from the 1.29 per cent last year, but the largest share of the economy in a decade.

It also exceeds the government's original plan, laid out in the Liberals' defence policy in 2017, to spend 1.4 per cent of GDP on the military by 2024-25. That is when NATO members were supposed to hit the two-per-cent target.

Yet the figures show the expected increase isn't the result of a new infusion of cash for the Canadian Armed Forces this year as spending is expected to hit $30 billion, up just over $1 billion from 2019.

Rather, NATO predicts Canadian GDP will shrink by about eight per cent this year as COVID-19 continues to ravage the economy.

The fact Canadian defence spending is expected to remain largely steady despite the pandemic is noteworthy, particularly as there have been fears in some corners about cuts to help keep the federal deficit under control.

The NATO report instead appears to lend further credence to recent assertions from Defence Minister Harjit Sajjan, Defence Department deputy minister Jody Thomas and others that the Liberals are not readying the axe.

Canada also remained 21st out of 29 NATO members in terms of the share of GDP spent on the military as other allies also got a surprise boost from the economic damage wrought by COVID-19.

At the same time, Perry said the government has yet to lay out a timetable for when it plans to meet the two per cent target. Military spending is instead expected to start falling after 2024-25, according to the Liberal defence plan.

Despite having agreed to the target during the NATO leaders' summit in Wales in 2014, successive Canadian governments have repeatedly described the NATO target as “aspirational.”

This report by The Canadian Press was first published Oct. 21, 2020