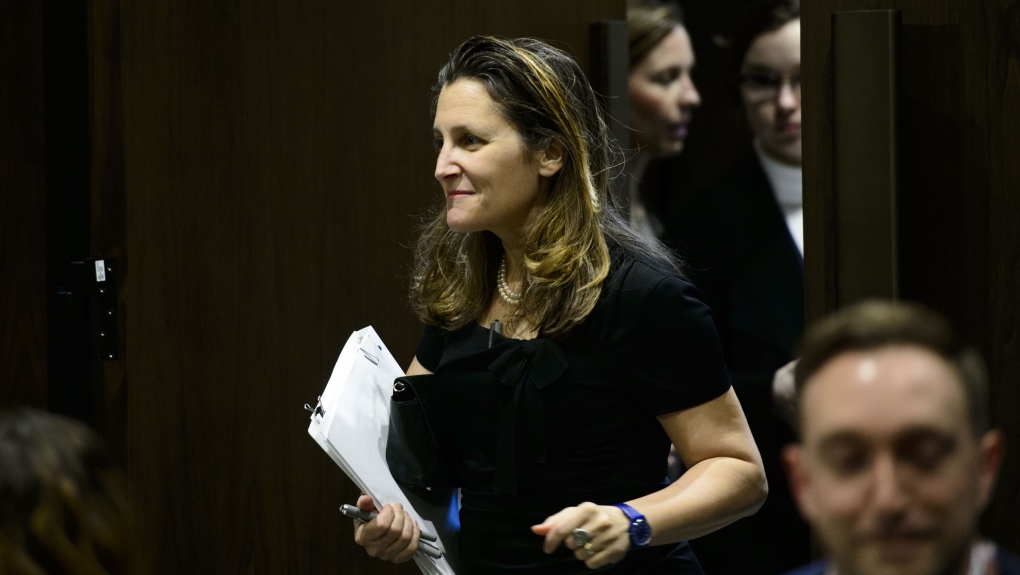 Foreign Affairs Minister Chrystia Freeland appears as a witness at a Senate Committee on Foreign Affairs and International Trade at the Senate of Canada Building in Ottawa on Tuesday, April 9, 2019. Canada has added 43 additional people to its list of sanctions against those it says are cronies of Venezuelan President Nicolas Maduro. THE CANADIAN PRESS/Sean Kilpatrick

The initiative is part of ongoing government efforts to shore up international co-operation at a time of waning American leadership and Trump's outspoken disdain of institutions created after the Second World War, including the G7, the World Trade Organization and the United Nations.

Foreign Affairs Minister Chrystia Freeland offered Canada's support for the Alliance for Multilateralism during a meeting of G7 foreign ministers in Dinard, France earlier this month.

Japan also joined the new alliance during the meeting, and Freeland marked the moment on Twitter posting a photo of herself with Jean-Yves Le Drian, Heiko Mass and Taro Kono, her French, German and Japanese counterparts.

"Many of today's greatest challenges are global and they can only be solved when we work together. That is why Canada stands united with its German, French, and Japanese friends," Freeland said in the photo's caption.

Freeland also avoided any direct mention of the Trump administration, as has been her approach generally in her frequent critiques of the attacks on the world's multilateral order and the need to defend against them.

Le Drian and Maas appeared to dance around the fact that the United States was not a member when they formally unveiled the new alliance in early April at the United Nations.

France's envoy to Canada, however, connected the initiative to Trump in a recent interview.

"Mr. Trump doesn't like to value multilateralism," said Ambassador Kareen Rispal, referring to his withdrawal from the Paris climate change agreement, and his criticism of the UN and WTO.

"It sends the wrong message to the world if we think that because Mr. Trump is not in favour of multilateralism, it doesn't mean we -- I mean countries like Canada, France, Germany and many others -- are not still strong believers."

During testimony last week before the Senate foreign affairs committee, Freeland said that Canada joined the alliance overs concerns in the G7 over the growing threats posed by authoritarian regimes and their disinformation campaigns aimed and discrediting democracy and its institutions.

She commended "G7 partners" Germany, France and Japan, but again made no mention of the U.S.

"We know in order to walk the walk in supporting the rules-based international order we need to show people how essential these institutions are in our daily lives."

Freeland cited Canada's participation in several other multilateral initiatives, including the Lima Group coalition on Venezuela, and ongoing support for international trade bodies and treaties.

On Monday, Canada imposed sanctions on another 43 people it says are implicated in the political and economic crisis in Venezuela.

The new sanctions coincided with Freeland joining her counterparts in Santiago, Chile at their 12th Lima Group meeting. The Western Hemisphere Coalition does not include the U.S., but is nonetheless aligned with the Trump administration in calling for Maduro's ouster.

Canada, its Lima Group allies, and the U.S. are among approximately 50 countries that say Maduro stole his country's election last year and is no longer the legitimate leader of Venezuela.

They instead recognize opposition leader Juan Guaido as the country's interim president, and have called on the Venezuelan military to back him.

Canada has excluded the U.S. from another multilateral initiative, aimed at reforming the WTO. In October, Canada hosted 13 of the WTO's more than 160 members in Ottawa for a meeting that is looking at ways to reform the world's trade referee.

On Monday, Freeland's office responded to the WTO's most recent decision in its ongoing softwood lumber dispute with the U.S. Last week, the WTO issued what was essentially a split decision that upheld a controversial U.S. practice known as "zeroing" to calculate anti-dumping duties on Canadian softwood.

"We welcome the recent WTO panel ruling that the United States did not follow the rules in calculating its anti-dumping duties on Canadian softwood lumber. The United States must bring its measures into conformity with its WTO obligations," Freeland said in a separate statement.

"Canada will be appealing the WTO panel's separate findings on the U.S. practice of zeroing and its use of the differential pricing methodology. The WTO has ruled more than 20 times that zeroing, a method of calculating and applying artificially high and unfair duty rates, is inconsistent with WTO rules."