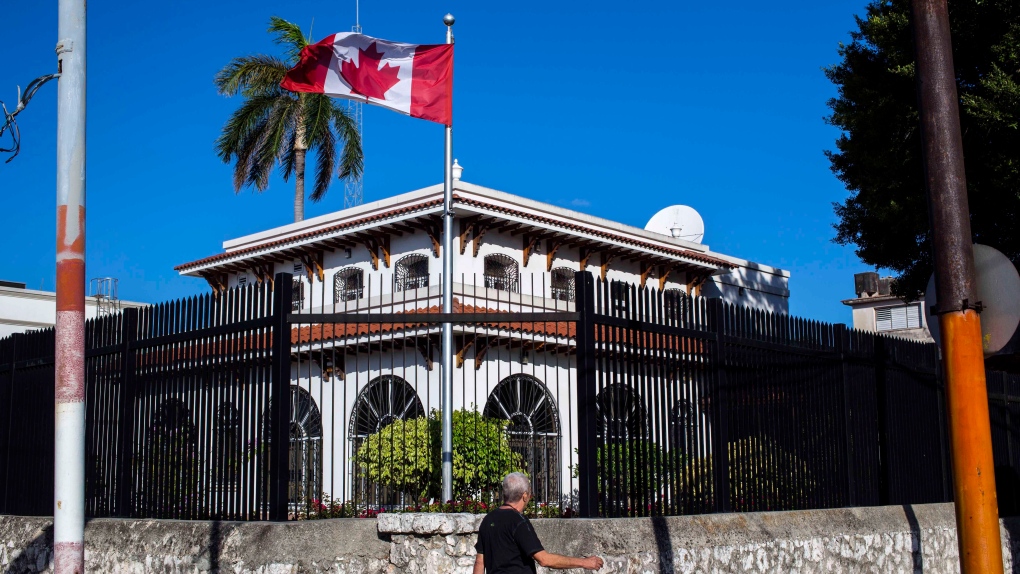 Canada's foreign ministry has advised staff serving around the world to watch for mysterious illness symptoms following unexplained health incidents among diplomats in Cuba and U.S. personnel in various countries.

In September, Global Affairs Canada began briefings with senior managers at headquarters in Ottawa, all heads of mission abroad and partners from other federal departments working at embassies, says a newly disclosed briefing note.

On Oct. 7, a broadcast message to all Global Affairs staff was issued, outlining the symptoms and how to report concerns, says the note, prepared in November for Melanie Joly, who had just been sworn in as Canada's latest foreign affairs minister.

Several U.S. personnel who worked in Cuba have reported similar health issues, commonly known as Havana Syndrome. More recently, there have been reports of symptoms among U.S. personnel in Washington, Austria and China.

"There continues to be ongoing media coverage of unexplained health incidents experienced by U.S. government staff abroad, which has understandably generated concerns among Government of Canada employees around the world," says the November note to Joly.

The Global Affairs staff briefings were done out of "an abundance of caution and to meet our duty of care obligations," the note adds.

The RCMP and Canadian Security Intelligence Service have sent similar messages to their staff, the department says.

Global Affairs spokeswoman Patricia Skinner declined to say whether any new cases had been reported by staff since the department's 2021 briefings on health symptoms.

"For privacy and security reasons, we cannot comment on the specifics of the ongoing investigations, individual cases, nor on specific security measures," she said.

Ongoing Canadian and U.S. investigations have not determined a cause of the ailments, though theories have ranged from targeted sonic attacks by an adversary to pesticide spraying.

Given the unusual health incidents in Cuba, as of April 2018 the Canadian diplomats posted to Havana have not been accompanied by spouses or children.

In January 2019, Global Affairs reduced its diplomatic footprint in Havana by half. Since then, the department has increased the number of diplomats, not yet to full staffing, to allow the mission to respond more effectively to the consular needs of Canadians in Cuba and to advance Canadian foreign policy, trade and development priorities, Skinner said.

"Global Affairs Canada intends to increase the number of Canadian diplomatic staff in Cuba in due course," she added.

Department records obtained by The Canadian Press through the Access to Information Act indicate the move to fuller staffing in Havana was paused temporarily last March given the appearance of a possible new case of the syndrome.

"Depending on the situation, we could explore additional health and security measures that would allow us to go forward with the increased footprint, or we could look at other options," say internal notes for a March 5 briefing of officials.

Skinner declined to say whether the possible case was indeed confirmed through testing.

Eight Canadian diplomats and their family members who became mysteriously ill while posted to Cuba are suing Ottawa in Federal Court for millions of dollars in damages.

Paul Miller, a lawyer for the families, said in an interview that at least one more diplomat who served in Cuba -- possibly the unnamed one mentioned in the March 2021 department memo -- will soon be added to the lawsuit.

Miller said that some ailing diplomats "do not want to get involved with suing their government" given the possible damaging effects on their careers. "And this last person took some serious time before deciding to join."

The diplomats say the Canadian government failed to protect them, hid crucial information and downplayed the seriousness of the risks. The government denies wrongdoing and negligence, and wants the court to dismiss the action.

Skinner said Global Affairs continues to maintain a security and health protocol to respond immediately to any unusual events or health symptoms affecting Canadian diplomats and their families.

The RCMP has not revealed findings of its long-running investigation of the health ailments.

Pamela Isfeld, president of the Professional Association of Foreign Service Officers, said she hopes there will be a resolution to the puzzling episode.

"I share the frustration of everybody -- there just doesn't seem to be a conclusion anywhere close in this investigation."

Texas gunman was inside the school for over an hour

Ukrainian Prime Minister Denys Shmyhal says the West must not give in to Russian pressure to ease sanctions in order to restart the flow of agricultural exports.