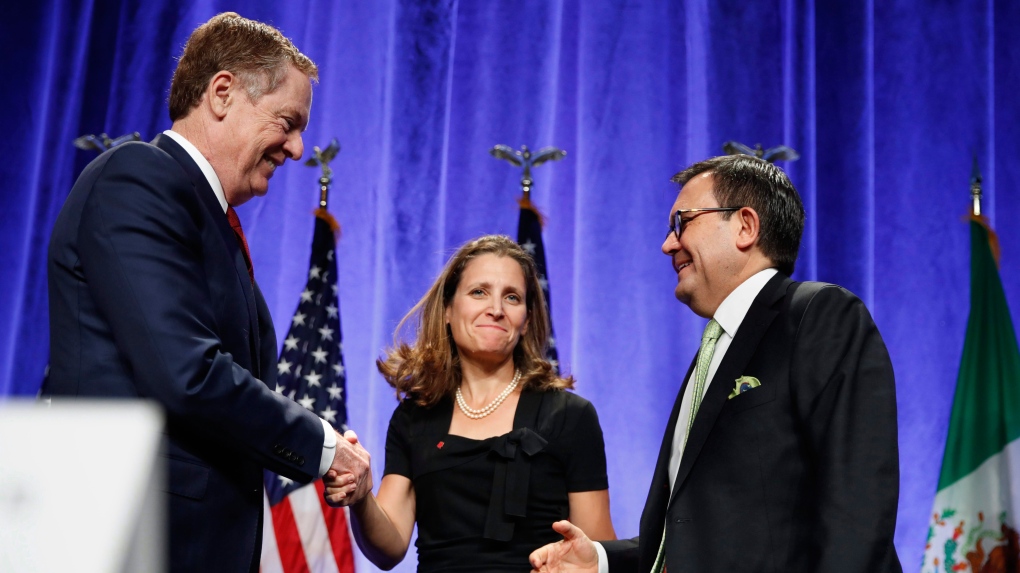 WASHINGTON -- It was Canada's ultimate prize in the original free-trade deal with the U.S.: a third-party arbitration system to judge whether punitive duties were being applied unfairly. On the final night of negotiations, after a tense phone call involving Brian Mulroney, Canada got what it wanted.

It had been a high priority back then because Canadian industries were being clobbered with duties over allegations of unfair subsidies and product-dumping. They had been hit with about 34 dumping complaints by American competitors in the decade preceding free trade.

Yet that shiny trophy now sits mostly untouched on the shelf, gathering dust. Statistics scraped off U.S. federal websites show a gradual decline from 34 U.S. anti-dumping investigations in the 1980s, down to about 25 in the 1990s, 16 in the 2000s, and only a couple this decade.

Canada is now being asked to give it away.

The Americans want an overhaul of the arbitration system -- this includes the panels created to scrutinize dumping duties under Chapter 19 and, separately, the Chapter 11 system for companies suing governments.

Washington critics have long detested Chapter 19 for its rulings on softwood lumber, its perceived violation of national sovereignty, and its alleged unconstitutionality. Some have suggested it could be challenged in court.

The Canadian government now faces tough questions, as it enters negotiations for a new NAFTA. Is Chapter 19 still valuable? Is it worth fighting for? Is there room for compromise, with changes that would preserve the system?

A lawyer who has argued before Chapter 19 panels says it's time to start considering saying goodbye.

Clifford Sosnow, a partner at the Fasken Martineau law firm, says the system has done good things, such as building trust between the countries and lowering the temperature on trade. That doesn't mean Canada should cling to it at all costs. He simply says Canada should consider trading in its big chit.

"(A country) needs to prioritize: what are the most important things to have?... If the United States said, 'We will exempt you from Buy America. And we will make it easier for your businesspeople to come into the United States and live here for any number of years. And we will give you access to procurement at the state and municipal level. And we will have a process that's different from Chapter 19' -- that's a very attractive ask."

An adviser to the Canadian government in the original free-trade negotiations would also consider trading it away. Jon Johnson lists several reasons why. Here's what's changed since that late-night Mulroney phone call, he says:

--Back then, there were no international agreements defining illegal subsidies and dumping. The countries have since passed domestic laws based on definitions at the World Trade Organization, founded in 1995.

--The countries are more interdependent. Nowadays, when a U.S. industry launches a trade action against the country next door, Johnson says, it's not just hurting the competition, it's increasingly likely to be suing its own subsidiary.

"You don't want to start trade-remedy action (against yourself)," Johnson said. "I (believe) greater integration ... has dampened the enthusiasm for starting anti-dumping and countervailing duty actions."

--Chapter 19 may be in trouble, anyway. The U.S. lumber lobby once sued the NAFTA panel system as unconstitutional, unsuccessfully. Johnson says there's a 100 per cent chance it will try again if the current dispute drags on.

He's not sure it would survive the next court fight. For starters, in the Trump era, he says, U.S. government lawyers might not fight as hard to defend Chapter 19 as they did in the 2005 suit.

For those reasons, Canada should consider cutting a deal, Johnson says. But he says the returns better be good, because this is one valuable bargaining chit for Canada.

Some see room for compromise.

In the design of the system, Ottawa trade adviser Peter Clark says the countries might be able to rejig the mechanism so that it adds a role for domestic courts, or uses actual, possibly retired, judges as panellists.

One big irritant looming over any compromise is softwood lumber. It's the main historical battle dealt with by these panels, it's on again, and Canada would be loath to drop the weapon it has in Chapter 19.

Johnson says compromise is likelier if the countries could agree on the definition of a stumpage fee, and achieve long-term peace in this mother of all recurring trade spats.

Lawyer, writer and professor Patrick Macrory analyzed the early performance of the Chapter 19 panels, in a paper years ago. In their 26 first cases inspecting U.S. punitive measures, only five were left intact, and duties were reduced for the majority.

Punitive duties aren't as common now. The panels haven't been used in three years. And that's a good thing for Canada, Macrory said.

"In my view Canada should fight hard to keep Chapter 19," he said in an email this week.

"Though it will be a very tough fight."