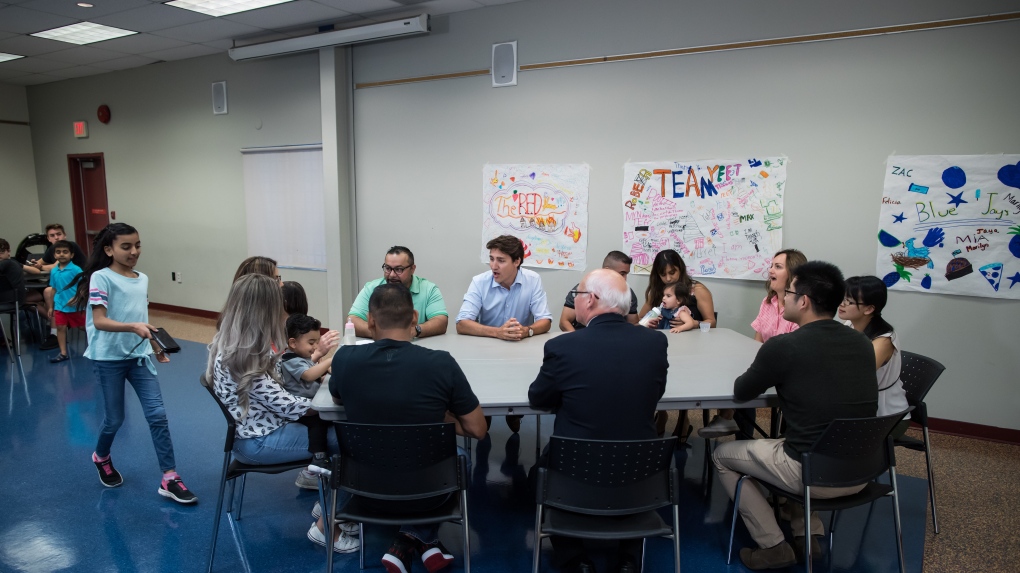 Prime Minister Justin Trudeau, back centre, sits down to speak with families about the Canada Child Benefit during a visit to the Surrey Sport and Leisure Complex, in Surrey, B.C., on Saturday, July 13, 2019. THE CANADIAN PRESS/Darryl Dyck

OTTAWA -- The Canada Child Benefit is running smoothly, says federal auditor general Karen Hogan, aside from a few administrative deficiencies that impact eligibility for the support.

The auditor general also took note of a provision in the program that automatically awards the female provider in a household allocated payments.

The audit focused on whether the Canada Revenue Agency (CRA) "ensured that Canada Child Benefit (CCB) recipients were eligible for the benefit and that payments were made in a timely and accurate manner," and was part of Hogan’s 2021 spring reports tabled in Parliament on Thursday.

Hogan found that the CRA was, for the most part, meeting its main objectives in the delivery of the CCB, but that at times, the agency was making payments based on "outdated" information.

"For example, in the sample we analyzed were instances in which the agency was not informed of changes, including the departure of a recipient from Canada. Payments continued until the agency received an adjustment to the account information or until the parent ceased filing a Canadian income tax return. In these circumstances, an amount would need to be repaid to the government," reads the report.

To mitigate this, Hogan recommends enhanced communication and information-sharing between federal agencies to fill in unnecessary gaps. She also recommends a requirement of a valid proof of birth at the time of the application, to raise the "integrity" of the program and to speed up the benefit process.

The report also raises concern with the concept of female presumption embedded in the CCB, which Hogan says fails to recognize diverse Canadian families.

"This concept appears in the Income Tax Act. Where the presumption is found to apply and is not rebutted, the program directs any payment to a female living with the child or children for whom the payment is made, because she is presumed to be the primary caregiver," reads the report.

According to the online CRA application process, in situations where the male parent is primarily responsible for child care, he is required to attach a signed letter from the female parent assuring his duties.

"In some reconstructed and blended families, it was the new female partner who received benefit payments based on the information available even if she was not, in reality, the primary caregiver. In these instances, we saw convoluted and confusing letters sent by the agency, informing the male partner about who would receive the benefit payment based on the information that the agency had and steps that could be taken to remain the primary caregiver according to the agency."

Responding to this, Hogan says the CRA should "enhance its procedures and communications to mitigate the confusion and sensitivities caused by this concept."

In their response, the CRA agreed with Hogan’s recommendation and said the agency will review its procedures and communication tools online, and on physical forms.

"The review will be to ensure that information is readily available to help everyone understand the steps required for the primary caregiver of a family to receive the Canada Child Benefit."

The CCB is a tax-free monthly payment for families caring for a child under the age of 18. Applicants must be a Canadian resident and the primary caregiver for the child’s upbringing. Payments vary based on adjusted family net income (AFNI). If a family’s AFNI is below $31,711, they’re eligible for the maximum payment of $6,765 per child under the age of six, and $5,708 per child aged six to 17. Benefits begin to decrease when a family’s AFNI is above the threshold.

The Liberals introduced the benefit in 2016. Minister of Families, Children and Social Development Ahmed Hussen announced a boost to the program in July 2020 for the following year to keep up with rising living costs. This was in addition to a one-time payment of up to $300 issued in May 2020 for CCB recipients to help with added COVID-19 costs.

Hogan also audited that one-time payment, which was based on a sliding scale of net family income. The audit found that the formula adopted to quickly distribute the support allowed for close to 265,000 higher-income families, not normally eligible for the CCB, to benefit.

Other COVID-19 benefit programs have faced scrutiny for delayed payments, confusing eligibility requirements, and costly loopholes, among other complaints.

Earlier this month, Canada’s employment minister offered relief to some self-employed applicants of the Canada Emergency Response Benefit, after many reported receiving letters from the CRA saying they may not have met the eligibility requirements for the $2,000 monthly payment and would be ordered to repay the sum of their benefits.

Carla Qualtrough clarified that as long as recipients checked off the other boxes, they wouldn’t be forced to reimburse the government because of unclear messaging in the original CRA application.

The Minister for National Revenue Diane Lebouthillier said she welcomed the auditor general’s report, and is confident the CRA will take the necessary steps to improve their services.

"The CRA has already identified appropriate steps, within its authority, to obtain even greater assurance that CCB eligibility conditions are met. This includes engaging with other government department partners to improve shared data, " Lebouthillier said in a press release.