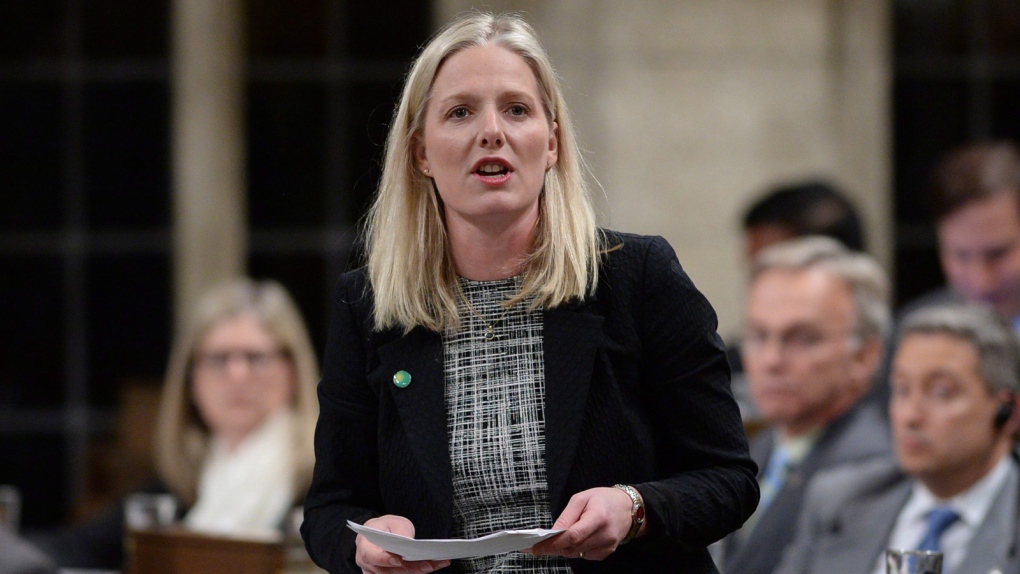 Minister of Environment and Climate Change Catherine McKenna responds to a question during question period in the House of Commons on Parliament Hill in Ottawa on Friday, Feb. 26, 2016. (Sean Kilpatrick / THE CANADIAN PRESS)

OTTAWA -- If there is one constant in Canada's two-decade track record of international climate diplomacy, it is a repeated failure to make good on its collective commitments.

So as Prime Minister Justin Trudeau prepares to sit down with premiers this week in Vancouver to discuss climate policy, Canadians can be forgiven if they're a little jaundiced.

Environment Canada's own projections show the country is far from being on track to meet its 2030 carbon reduction target, set last May by the former Conservative government and described as a "floor" by Catherine McKenna, the new Liberal environment minister.

With the country's political leaders seemingly poised to embark on an ambitious new round of climate collaboration, The Canadian Press asked four climate and energy experts whether Canada's current 2030 target of reducing emissions 30 per cent below 2005 levels is achievable -- and if so, how.

They include: an advocate for clean energy technology; a former senior federal civil servant who has held top roles with the Canadian Gas Association and the Canadian Electricity Association; an academic who pioneered carbon price modelling in Canada; and a former climate policy adviser in the Conservative government of Stephen Harper.

Smith is an optimist who sees the answer in electrification.

"We are talking about transforming the way we produce energy, produce electricity, and how we consume it," she says of the 2030 target. "So it's a big challenge. But yes, we can do it. And there are co-benefits that come from doing it as well."

Smith says Canada should set the emissions-free target at close to 100 per cent, which will drive global investment in clean energy to Canada.

She argues the very act of setting a legislated target spurs investment, even without any inducements or penalties attached to achieving those goals.

Governments could use transmission lines to link regions with hydro power to those without, providing power to back up newer generation technologies en route to much greater reliance on electrification, powering everything from transportation to home heating to industry.

"The basic premise is we need to be heading toward zero-carbon electricity, net-zero commercial buildings and homes, and electrification of personal transportation and using more electricity in industry," Smith says.

"Those are the four pillars of having Canada meet its climate targets."

In addition to public transit, Smith would like to see zero-emission vehicle standards and a clean fuel standard. And she believes there's a role for government in supporting car-charging infrastructure to help electric vehicle owners, and also to provide electric vehicle rebates like every other G8 country.

"You don't need any new breakthroughs in technology for Canada right now to meet its 2030 targets," she said.

"This is not about sacrifice. This is about building lives that are going to be better."

Cleland sees obstacles in the speed at which business and investment can adjust to climate targets.

In a recent speech, he lauded Canada's environment ministers for publicly acknowledging how far behind they are in reaching the national 2030 target.

"To meet any of the 2030 national targets being bruited about implies a change in trajectory which is probably impossible under any circumstances," he said.

"At the very least, we would have to very quickly adopt policy action (at a) much greater rate than we have seen either from Ontario with its coal phase-out or B.C. and Alberta with their carbon taxes."

If governments find the political will to implement their climate targets, he continued, "then we are looking at radical increases in carbon costs" through carbon prices or regulation.

"Are we willing to tell consumers that their energy costs need to go up by 50 to 100 per cent or more -- pretty much starting tomorrow -- in order to meet our 2030 greenhouse gas commitments?"

In an interview, Cleland said the main issue is timing.

"The technologies are there that would allow us to do that. Could we get them in place that quickly? I don't see how. The process of capital turnover just isn't fast enough."

While 2030 can seem very science fiction-like, it's only 14 years away. That short time frame, said Cleland, is working against the underlying growth trend in the Canadian economy.

Even if you assume no growth in the oil and gas sector over the next 14 years -- a rather dire prediction for Alberta -- the country still requires further cuts of 200 megatonnes of greenhouse gases.

"There's an awful lot of capital in place -- buildings, transportation equipment, transportation infrastructure -- that isn't going to change over those 14 years," Cleland said.

Planning, approving and building a new transmission line can take a decade, he noted.

"I'm not at all saying we shouldn't be pushing really hard on this," added Cleland, who personally advocates for carbon taxation. "But that (2030) time frame is really much, much tougher than people think."

Jaccard sees solutions in a government crackdown on specific emitters.

"If we acted immediately and effectively, it would not be that costly to achieve the target," said Jaccard. "But climate targets are always difficult politically, because climate policies are always politically unacceptable."

That's because there's little political upside in asking constituents to make immediate sacrifices for gains that are beyond the election-cycle horizon.

Jaccard, an economist who's been doing carbon price modelling for three decades, recently caused a stir with an article advocating government regulation -- with all its hidden costs -- over direct carbon levies, due to the practical political realities.

A pure carbon price model would need to incrementally impose a levy of $160 per tonne by 2030 to hit Canada's emissions target, he argues.

Governments can move much faster through regulation, he said, even though a specific crackdown on emissions may impose higher costs for those involved.

In B.C., where the government forced a switch from electricity made from natural gas to a new system using wood waste, Jaccard figures the implicit cost is $110 per tonne of emissions -- much higher than the province's explicit carbon tax of $30 per tonne.

A well-designed, government-mandated zero-emission generation policy, for example, shouldn't care whether the solutions are nuclear, wind, solar, or coal scrubbed by carbon capture and storage. All that matters are the emissions, said Jaccard.

And while acknowledging, almost in passing, that things like zero-emission vehicles are already on North America's roads, Jaccard won't pitch a particular technology path to cutting emission to reach the 2030 target.

"You're pushing on all fronts incrementally."

Cameron, a former policy adviser in Stephen Harper's office, calls Canada's current 2030 reduction goal "a very demanding target" but says it is achievable. He sees a market-based solution that allows business to figure out the best way.

"The key tool is putting a price on carbon," says Cameron. "If you have a price and people know what the price is going to be and know that it's going to escalate at a fairly predictable rate, that gives the most opportunities to respond in the most efficient way."

Cameron says the lower-end scenarios for reaching the 2030 target involve a price on carbon of about $100 a tonne.

By contrast, he calculates Ontario's phase-out of coal-fired electricity generation had an implicit cost of about $150 per tonne.

Keeping the carbon levy revenue neutral by rebating it to the public through the tax system will be the key to political acceptance, he said, citing the B.C. model.

He's not sold on zero-emission vehicle regulations, such as those in California, or federal fuel efficiency regulations, which may simply redistribute fleet emissions around the country.

"The low-hanging fruit is consumer-based emissions for gasoline, electricity, home heating," said Cameron, and price signals will drive those changes.