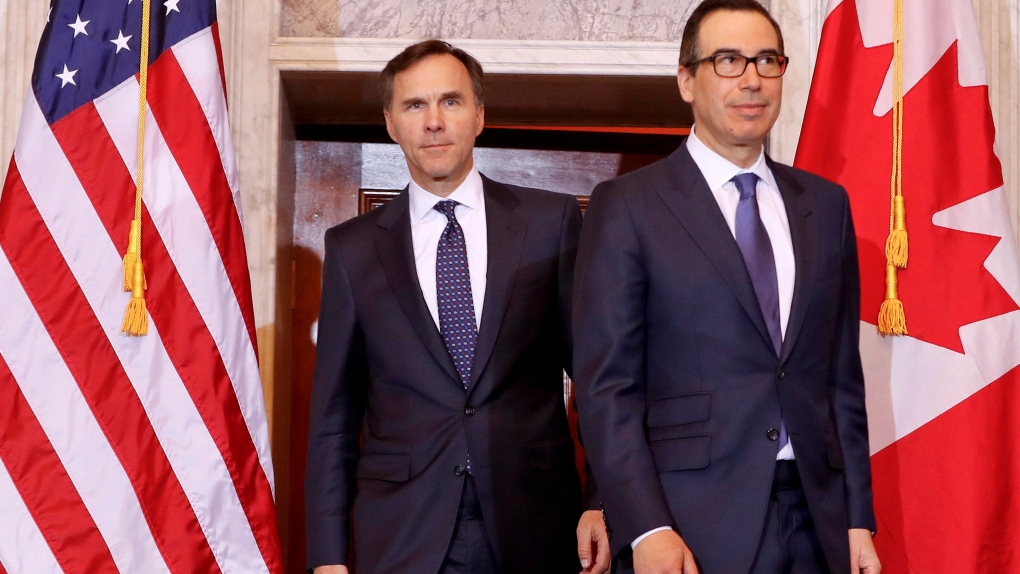 OTTAWA -- Finance Minister Bill Morneau was told months before he gave a federal helping hand to the country's businesses that companies operating in Canada faced a better tax environment than in the United States -- even after the Trump administration's sharp tax cuts.

The August 2018 analysis said the American tax reforms had "reduced, but not eliminated" the tax advantage for businesses north of the border.

The Canadian Press obtained a copy of the document through the Access to Information Act.

That November, Morneau released an economic statement with measures allowing businesses to immediately write off the full costs of some machinery and equipment and expense a larger share of new assets, at a cost to the treasury of $14 billion over five years.

Now, Morneau is set to deliver a similar update on Monday that will outline the outlook for the economy and federal finances. While few expect measures like the ones in last year's economic statement, the update will set the table for the 2020 federal budget and should indicate how the 2018 measures have been used.

The data on business investment has been mixed since the new rules came into place.

Uncertainty over the United States-Mexico-Canada Agreement should subside with ratification underway and encourage businesses to make more use of the accelerated-depreciation rules, said Brian Kingston, vice-president of fiscal and international matters with the Business Council of Canada.

He said Morneau should still aim to lower the combined federal-provincial tax rate on businesses to 20 per cent from the current almost-27 per cent, which is above the average of OECD countries.

"The reason that matters is when you're trying to attract capital in North America, particularly in an environment where you have a protectionist ... U.S. president, companies want to be inside Fortress U.S. So Canada, as a small economy, always has to have an advantage over the U.S. to make it that much more attractive," he said.

In July, the Finance Department released a paper that looked at the "marginal effective tax rate," which takes into account provincial and other taxes to estimate the cost to businesses of making new investments. The effective tax rate was the basis for the summer 2018 analysis that found Canada's business taxes were lower than the United States', and for the numbers in the November 2018 update.

Kingston said the measure focused on the write-off rules shouldn't be viewed as making Canada more competitive than the United States.

Canada was the only country that adopted accelerated depreciation as a response to Trump's cuts, while some two dozen others lowered their corporate tax rates, said Jack Mintz, a tax policy expert at the University of Calgary.

Mintz's own calculations, which take into account sectors like oil and gas that Finance leaves out, suggest Canada's effective tax rate on capital was a little higher than the U.S. before and after last year's changes.

"Theirs was lower," he said, referring to the Finance Department.

"If it is lower, then it raises questions like why are they doing accelerated depreciation, which I think is distortionary and bad policy, in the first place?"

The American move allowing the immediate write-off of costs for some equipment was considered the most significant measure by independent businesses south of the border, said Dan Kelly, president of the Canadian Federation of Independent Business.

Canada's response was a step forward, Kelly said, but small-business tax changes in 2017, the federal carbon tax and increases to Canada Pension Plan premiums to fund the expanded program have been a step back in his view.

"Those are all taking the wind out of the sails," he said.

"You want to stimulate the economy with one hand, and you're throwing on the brake with the other and so you can understand why there's a bit of a whipsaw effect on the part of the business community."