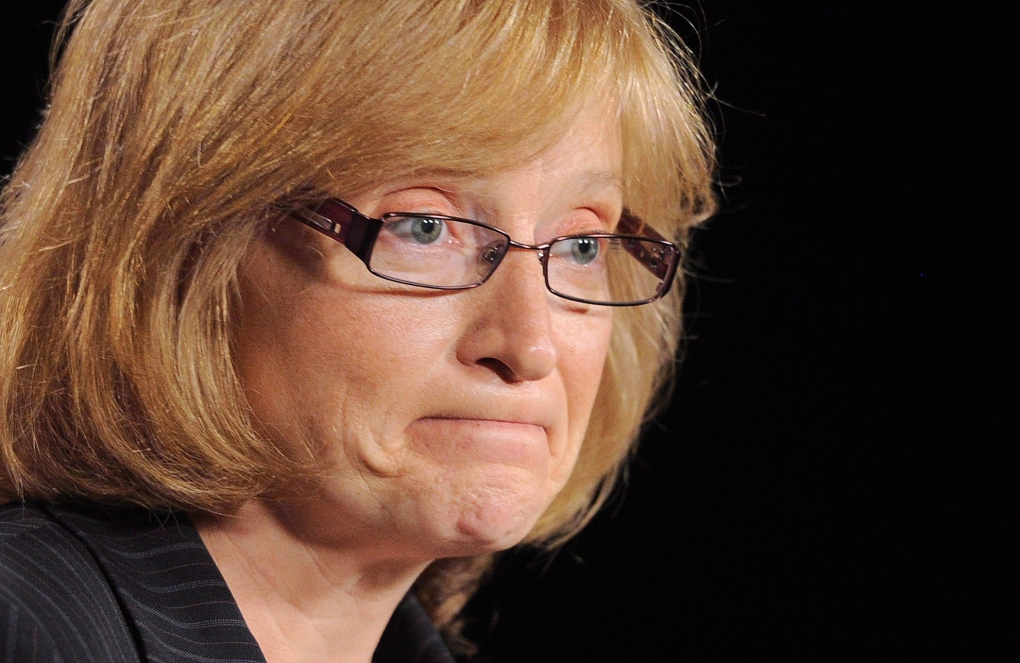 Suzanne Legault, Information Commissioner of Canada, speaks in Ottawa in this May 2012 file photo. (Sean Kilpatrick / THE CANADIAN PRESS)

OTTAWA -- The federal budget axe may be chopping away at citizens' right to information about government, a parliamentary watchdog warns.

Suzanne Legault, information commissioner of Canada, says her office has seen a sharp rise in complaints about departments that take too long to answer requests under the Access to Information Act.

The increase in such complaints over the last six months is likely linked to budget cuts that will remove 19,200 public servants from the federal workforce by 2015, Legault says in a new report.

"If this trend continues, it could seriously stretch our investigative team," says the document.

"We suspect ... that budget cuts may be a factor, since a jump in administrative complaints suggests that institutions are struggling to meet their basic obligations under the Act."

Legault's office is itself caught in the same budget squeeze, with funding reduced by five per cent as the number of complaints coming through the door rises, to 1,596 in 2012-2013, up by eight per cent from the previous year.

Legault will tell MPs at a House of Commons committee later this month that she needs more staff to deal with the burgeoning workload.

"Any meaningful solution could only come in the form of an infusion of resources so we could increase our staff complement," she says in a report tabled in Parliament.

The budget squeeze is apparently having an effect similar to 1995, when the Chretien government's so-called program review, also intended to slay the deficit, ground down the access-to-information system because of staff cuts.

The latest round of cuts, begun in 2011 but accelerating in the 2012 budget, seem to have reversed a modest improvement in the timeliness of responses under the access-to-information system.

"We're now back to an all-time low in timeliness," Legault said in an interview, citing statistics released in December by Tony Clement, president of the Treasury Board, which is responsible for the access-to-information system.

The percentage of requests answered within the basic 30-day time frame specified by the Act hit 55 per cent in 2011-2012, the lowest ever and down almost five points from when the Tories first formed government in early 2006. A decade ago, 66 per cent were answered within 30 days.

Departments also violated legislated deadlines for responses in one of every seven requests in 2011-2012, with most saying they lacked the staff necessary to process them.

"This is disquieting," said Legault. "There is a number of institutions where it's clearly having to do with the level of resourcing."

But a spokeswoman for Clement says the government's cost-cutting has deliberately spared the access-to-information system. Access to information "has not been part of that," Andrea Mandel-Campbell said in an interview.

She also noted there has been a 50 per cent increase in the number of requests arriving annually since 2006, currently more than 43,000 a year, many of them more complex than in the past.

Given the extra workload, the government has done well in maintaining a "pretty steady state" for timeliness, she said. "We are keeping up."

Mandel-Campbell also said the government is investing in new digital technology to make the access-to-information system more efficient and effective.

On Tuesday, Clement will appear in a how-to video on the Treasury Board website to launch a pilot project that will allow requesters to file and monitor requests online, and pay their fees electronically, all from a single portal.

Currently, many departments require a completed paper form and cheque, usually sent by mail. There is currently no central clearing house for requests.

The six-to-12-month pilot will include just three departments -- Citizenship and Immigration, Treasury Board and Shared Services Canada -- but is to be expanded eventually to all departments and agencies.

Also in the works for later in 2013-2014 is an online tool to allow searches -- by keyword, date or institution -- of summaries of completed access-to-information requests government-wide.

Departments and agencies currently are required to post such summaries monthly to their individual websites, but there is no central registry. An earlier registry known as the CAIRS system was killed by the Conservative government in early 2008.

The Access to Information Act came into force in 1983, when Canada was considered a global leader in government transparency. But the legislation, born in the pre-Internet era, has never been overhauled for the digital age, and of late Canada has been called an international laggard in freedom of information by human-rights groups and academics.

The Act allows anyone resident in Canada to request government-controlled information for a $5 application fee, plus any additional fees for processing and photocopies.

The law requires a response within 30 days, but permits departments to take sometimes lengthy extensions, and to black out broad categories of information, such as advice or security-related material. Aggrieved requesters can complain to the information commissioner without charge, though Legault's office lacks order-making power.