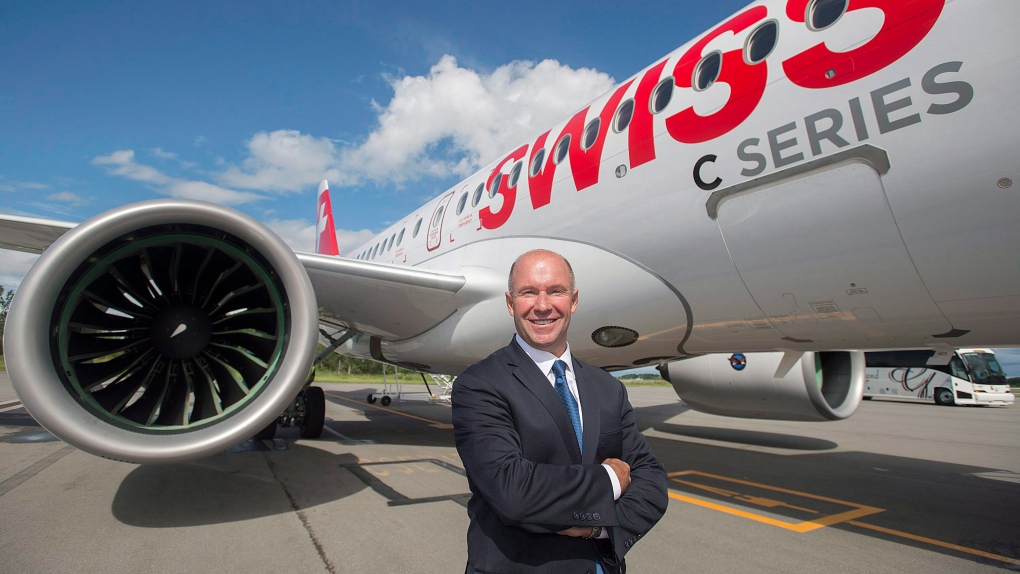 Bombardier CEO and President Alain Bellemare poses for a photograph next to a Bombardier C Series 100 with Swiss International Air Lines (SWISS) markings prior to a demonstration flight in Mirabel, Que., Wednesday, June 29, 2016. (THE CANADIAN PRESS / Graham Hughes)

OTTAWA -- Politicians, defence officials and Canada's aerospace industry have Monday circled on their calendars as the date to watch in Boeing's ongoing trade dogfight with Montreal-based Bombardier.

Here's what you need to know, and what is expected to follow:

U.S.-based Delta Air Lines agreed in April 2016 to buy 75 of Bombardier's CS100 regional jets, with an option for 50 more. The deal was a major coup for the Montreal company, which had struggled to sell its CSeries planes.

But Boeing alleges Bombardier sold the CS100s at an unfairly low price with help from federal and provincial government subsidies, and wants U.S. authorities to slap duties on the planes.

The list price for the planes is around $6 billion. But the actual amount of money involved in the deal has not been made public, and Boeing alleges it is much less.

The case has major implications for Bombardier as it could not only endanger its deal with Delta, but also hinder future sales in the U.S. and hurt those Canadian aerospace companies that work with Bombardier.

The U.S. Department of Commerce and U.S. International Trade Commission have been investigating whether Bombardier broke trade rules with the Delta deal.

The Trudeau government and Boeing were in talks to find a settlement, but they fell apart in August and the Liberals have since stepped up public pressure on the Chicago-based company to drop its case.

That includes threatening to cancel the planned purchase of 18 Super Hornets to temporarily augment Canada's aging fleet of CF-18s.

But Boeing has refused to back down, saying the case has long-term implications for its business. Bombardier contends the Delta deal doesn't affect Boeing.

What happens on Monday?

The U.S. Commerce Department will make a preliminary ruling on whether Bombardier benefitted from improper government subsidies, though the decision may not be made public until Tuesday.

The ruling will be based on information provided by Boeing, Bombardier and the federal government.

If it goes against Bombardier, Delta will be required to pay duties on every CS100 it receives. Those duties will be collected as a deposit until the end of the case. Boeing is pushing for an 80 per cent penalty, which some analysts have pegged at around $15 million per plane.

While most expect the Commerce Department to rule against Bombardier, the impact won't be felt until next spring when the planes start to be delivered.

Such a decision would nonetheless strengthen Boeing's hand, and put immediate pressure on the federal government to make good on its threat to walk away from the Super Hornets.

Prime Minister Justin Trudeau indicated last week that the government wants to keep talking to Boeing after the decision.

Even if the Commerce Department rules in favour of Bombardier, however, that won't signal the end of the case.

The Commerce Department will make a preliminary ruling on whether Bombardier "dumped" its CS100s into the U.S. market by selling them at a price that was less than its fair value.

This ruling is scheduled for Oct. 4, but some expect it to be delayed. Again, a finding against Bombardier would result in the collection of duties as a deposit.

Boeing wants an 80 per cent penalty for this as well, which would be on top of any duties applied because of the government-subsidy ruling.

If the Commerce Department says in either of its preliminary findings that Bombardier broke trade rules, it will then conduct a more detailed investigation to arrive at a final decision.

That investigation will look at everything from the cost of the raw materials used to build the CS100s to the cost of labour to determine the true price of the planes.

That information will then be used to come up with a final duty.

That would be the end of the case?

No. Boeing will still be required to show that Bombardier's deal with Delta hurt it before any duties become permanent.

The U.S. International Trade Commission is responsible for making that determination following a formal hearing, likely in December.

A final decision won't come until next year, possibly May or June.

If the commission concludes the deal did hurt Boeing, then Delta will have to pay the final duty rate on any CS100 it receives -- assuming the deal isn't scuttled. Any deposits will also be forfeited.

If the commission rules that Boeing wasn't affected, then the case is dropped and all deposits are returned.

However, any decision can be appealed through a variety of different avenues, including the U.S. Court of International Trade and the World Trade Organization, meaning the dispute could go for years.