Blanchet, O'Toole return to Parliament after being cleared from COVID-19 isolation 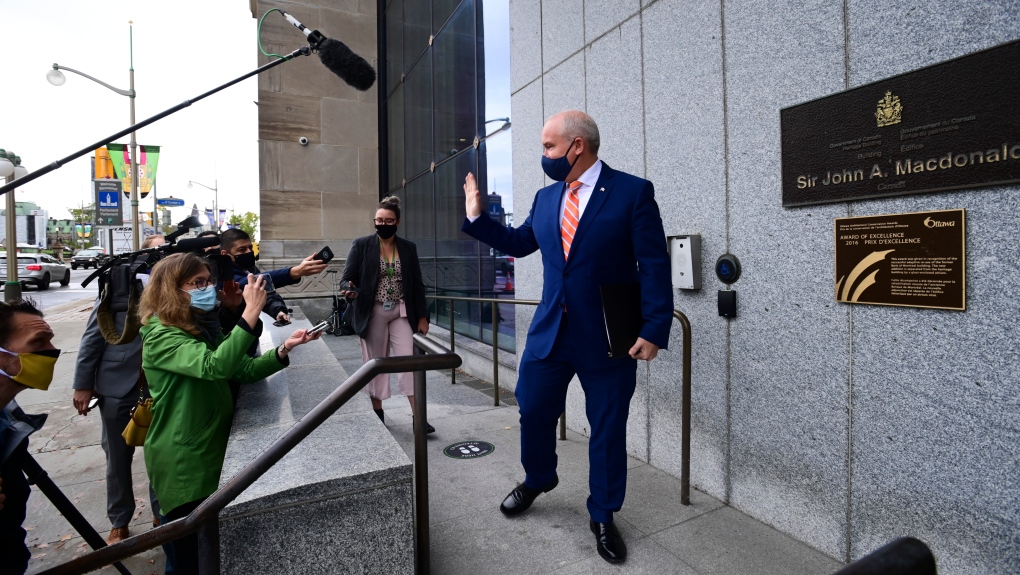 OTTAWA -- Bloc Quebecois Leader Yves-Francois Blanchet and Conservative Leader Erin O'Toole were back on Parliament Hill Wednesday, after being cleared by public health to leave their COVID-19 self-isolations.

Both federal political leaders were tested and confirmed to have COVID-19 in mid-September after staffers in their offices contracted the virus.

Blanchet and O'Toole told reporters Wednesday morning that they have followed public health guidance and were given the clearance to return to work, but will continue to take precautions including physical distancing and mask-wearing when required.

Blanchet said he got the all-clear on Saturday from Quebec's public health authorities, but with the rules a little different in Ontario, he waited the full 14 days before coming back to Ottawa.

"Some people go through it much more painfully than I did. I was very, very, very lucky. Some people die of that thing," Blanchet said. "There is no absolute protection, there is only ways to reduce the probability of catching the thing, and giving it to somebody that might be more vulnerable to it. And for that very reason, we must be very, very careful."

O'Toole, who ended up using a private testing option made available to MPs and their families in Gatineau, Que. after being turned away from an at-capacity Ottawa testing facility, said he was "feeling great."

"We all have to be very cautious, we're in a second wave… So we must take precautions and I've been working with public health about coming back. I'm excited, I feel good, so off to caucus," O'Toole said.

Wednesdays are caucus days on Parliament Hill, meaning the various political party caucuses meet behind closed doors to touch base with their colleagues and discuss the latest issues and items on their parliamentary agendas.

Prime Minister Justin Trudeau welcomed his opponents back to the Chamber during question period.

"Welcome back to this House," Trudeau said. "We all want good health for everyone."

At 3:10 a.m., after an all-night study, MPs voted unanimously to back Bill C-4, the Liberal's first confidence vote of the session, which implements a series of new COVID-19 aid benefits and extends pandemic spending powers until the end of 2020.

The bill is now before the Senate where they'll conduct their own evaluation before it can become law. The Senate has yet to resume regular sittings and some in the upper chamber are not pleased with the urgent recall to "rubber stamp" this latest pandemic piece of legislation, given the rush is in part a result of Prime Minister Justin Trudeau proroguing Parliament for a month.

The Senate study was expected to be concluded by the end of the week, but some senators who are displeased with the Liberals' legislative schedule have so far denied the unanimous consent needed to pass the bill quickly, meaning it could be next week before the bill receives royal assent, potentially putting in jeopardy the launch of the new benefits including paid sick leave.

Meanwhile, attention in the House of Commons returned to the debate on last week's throne speech. O'Toole delivered his formal responses to the speech Wednesday afternoon.

In his speech, O'Toole said that millions of Canadians were left out of the throne speech, and left behind by the Liberals.

Inside the Chamber, House administration has taken a series of measures to reduce the risk of transmitting COVID-19, and MPs are sitting physically distant from one another.

The throne speech will also come to a vote once the scheduled six days of debate are over, likely next week.

This vote too will be a matter of confidence, and it's unlikely it'll have the same unanimous support as Bill C-4 did.