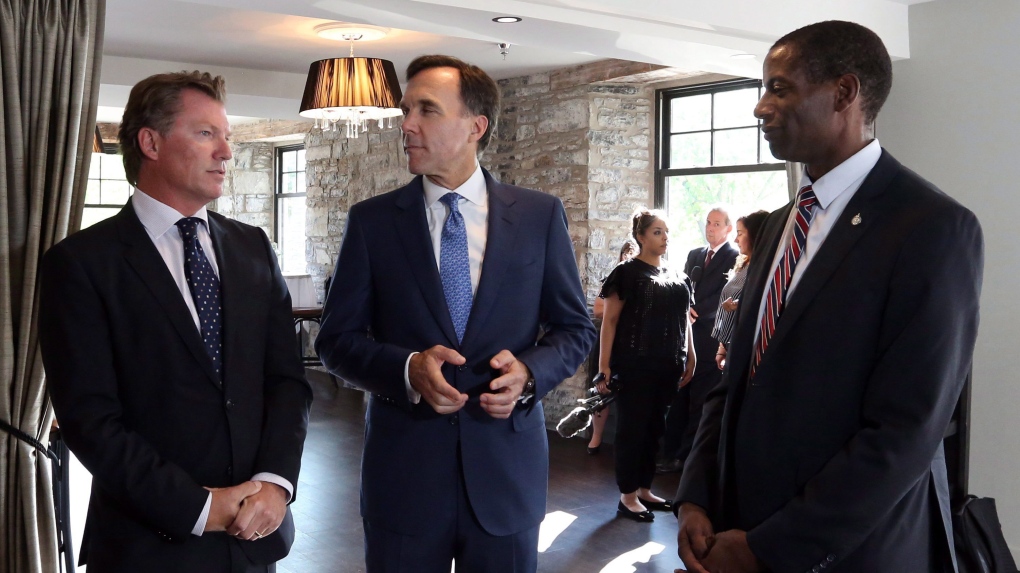 OTTAWA -- A big Canadian player has quietly picked up his chips and is heading for the exit amid the tumult over the Trudeau government's controversial tax proposals.

A business owner has informed John Manley, the head of an organization representing Canada's largest corporations, that he has moved billions of dollars outside the country since the Liberals formally proposed their tax changes in mid-July.

The government's proposals to eliminate several tax incentives have awakened a broad array of vocal opponents -- from the small business community, to farmers, to tax planners, to professionals like doctors and lawyers. Some backbench Liberal MPs have also publicly expressed their concerns.

In the background, the Liberals' proposed tax reforms are also seen as a threat by a much-smaller, more-silent group of Canadians: wealthy leaders of big business.

Manley, a former Liberal finance minister in the Chretien government, said the elements of the government's plan to tighten rules on passive investment portfolios and the transfer of family businesses have created worries for some members of his organization, the Business Council of Canada.

The financial concerns have been compounded by the government's accompanying messages that Manley believes have "vilified" higher-income Canadians.

Many of his members, he added, have been taken aback by rhetoric that they see as pitting the middle class against the wealthy.

"I don't get it at all -- I thought that one of the successes of Prime Minister (Justin) Trudeau was that he was the unifier, he was bringing people together," said Manley, who noted the broader economy would eventually feel the sting of losing too many big job creators.

"There's lots of journeymen hockey players in the NHL, but you still want to have some (Connor) McDavids and (Wayne) Gretzkys and people that are stars."

Manley pointed to one example where a successful business owner has decided to leave Canada with "billions of dollars."

On the advice of tax professionals, he said the individual decided to move the money primarily because of the impacts the reforms could have on his family through changes related to estate planning. Keeping the business in the family would result in a big tax hit.

There's a notion that other big players could soon head for the exits, Manley said.

"You won't know about it because they're not going to buy ads or report it -- they'll just go."

Manley's group is calling on the government to hold off on the proposed changes for now to allow for a broader review of the tax system that examines additional goals like making the entire structure less complex.

Failing that, he would like to see the feds fix any unintended consequences from the current plan on the table.

He argues that the tax system unfairly encourages wealthy Canadians to incorporate, so they can get a better tax rate than middle-income earners. The government insists the changes would level the playing field, although many disagree.

The package includes restrictions on the ability of business owners to reduce their tax rate by sprinkling their income to family members in lower tax brackets, even if those family members do not contribute to the company.

Morneau also proposed limits on the use of private corporations to make passive investments that are unrelated to the company. Another change would limit business owners' ability to convert regular income of a corporation into capital gains, which are typically taxed at a lower rate.

The government gave Canadians a 75-day consultation period, ending Oct. 2, to weigh in on the proposals. Morneau insists the government will listen to concerns before it tables legislation and that he expects some of the feedback will lead to changes.

If the government's proposals are introduced as is, University of Calgary tax expert Jack Mintz says there are plenty of options to get around the changes -- and he warns they wouldn't be good for Canada.

The reforms are aimed at private Canadian corporations, so Mintz said owners could change their citizenship, or partner with a foreigner or a public corporation to avoid paying more. He said they could also strip some of their firm's assets while leaving the company itself in Canada.

For example, countries like the United Kingdom offer attractive tax incentives for business people looking to move to its shores from abroad, Mintz said.

Since Morneau's tax announcement, Mintz said he knows one big business owner who has taken action and another who is considering it.

In these scenarios, he said Canada could not only lose tax revenue but the business leaders themselves, who create jobs and play constructive roles in their communities.

"It's a major blow to the country in a number of ways," Mintz said.

The president of a national small- and medium-sized business federation, which has been one of the most outspoken critics of the tax proposals, said many of his members have been receiving calls from business development organizations in the United States to offer them incentives to move across the border.

"There's all sorts of business immigration programs that are out there encouraging entrepreneurs to pick up and leave," said Dan Kelly of the Canadian Federation of Independent Business.

"Canada has to watch out because business owners in lots of areas can be quite mobile."