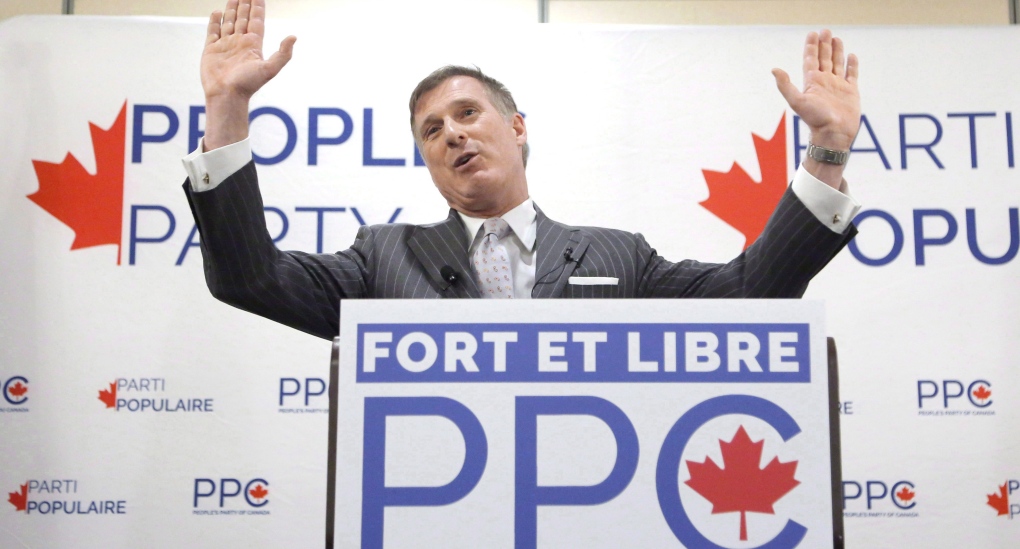 Maxime Bernier speaks at a People's Party of Canada rally in Gatineau, Que., on November 20, 2018. THE CANADIAN PRESS/ Patrick Doyle

OTTAWA -- People's Party Leader Maxime Bernier says his party's policies will not include anything to do with abortion or gender identity, despite the fact its first candidate besides him is a vocal social conservative.

Bernier is defending the appointment of former Christian talk-show host Laura-Lynn Tyler Thompson to be the Burnaby South byelection candidate for the party he founded after parting ways with the Conservative party in August.

In an interview, Tyler Thompson said her foray into politics began in 2017 when she learned about a B.C. government policy to teach sexual orientation and gender identity in elementary schools. She campaigned hard against the policy, running for the local school board in Burnaby last fall with that as her main issue.

She finished 11th out of 13 candidates but said she got enough votes to convince her she was speaking for a "silent majority" who stay quiet so they aren't called bigots but feel the way she does about not exposing children to an ideology at school.

Bernier said any of his candidates is free to speak out against abortion or gender identity but their views will not be the party's policy.

"That's all personal belief but it is not part of our campaign," he said. "She understands that she will fight for our platform and being sure we will be able to implement our bold reform."

That platform is the same one he used to campaign for the Conservative leadership in 2017, including phasing out supply management for food products, reducing the number of immigrants Canada accepts and stopping all government subsidies and handouts to businesses in favour of cutting their taxes.

Bernier has marched in pride parades and is also known to be pro-choice. In 2016 he voted in favour of Bill C-16, which added gender identity and expression to be protected under the Canadian Human Rights Act.

Thursday, he would not say where he stands on the issue of teaching gender identity in schools because that is a provincial issue.

Tyler Thompson said she isn't against anybody who says they are transgender or gay or lesbian but she feels strongly that nothing on those subjects should be taught in schools. When she said so publicly, she said, she was attacked and that is what motivates her now to campaign for the freedom to express her beliefs.

"I was having a good life and having a lot of lattes and living the dream and then I became the target," she said. "But I'm not a bigot. I'm not a homophobe. I'm not a transphobe."

Tyler Thompson herself has called fighting the curriculum her "hill to die on" but said she doesn't feel she has to bring that fight to the federal party because there are others who are now taking up that cause, including in Alberta and Ontario.

Bernier's new political adventure ramped up quickly, going from an idea in August to an officially registered party with Elections Canada in November to having riding associations in all 338 federal electoral districts by the end of December.

Bernier said the next goal is to find candidates in at least 90 per cent of those ridings, which will make him eligible to participate in leaders' debates.

The party's candidates for other February byelections in Ontario and Quebec are likely to be named next week. A fourth candidate, Jennifer Clarke, is named to run in Nanaimo-Ladysmith, recently vacated by NDP MP Sheila Malcolmson, but there is no byelection there yet.