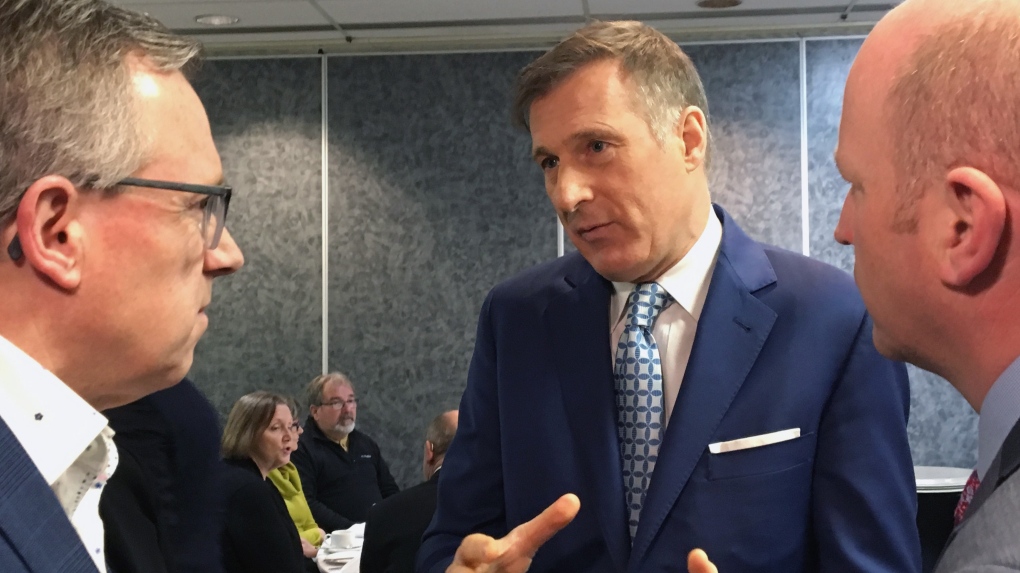 SAINT JOHN, N.B. -- Maxime Bernier looked to garner support for his fledgling People's Party of Canada Thursday as he spoke to a small business audience in New Brunswick -- his first East Coast foray since starting his new party four months ago.

He pitched his support for a revived Energy East pipeline, reducing equalization and removing barriers to interprovincial trade.

Speaking to about 60 members of the Saint John Region Chamber of Commerce, Bernier said the federal government needs to use its authority to prevent efforts to block Energy East, which is wildly popular in the city.

"During the debate on Energy East, you could have believed that Montreal Mayor Denis Coderre had the authority to block the project, just by himself," said Bernier, the lone MP for the party, which opinion polls suggest remains stuck in the low single digits nationwide.

"More recently, the newly elected Quebec premier, Francois Legault, implied that he too could block a project for a national pipeline when he said there was 'no social acceptability' for it in Quebec."

Bernier said provincial governments and Aboriginal communities don't have the power to block construction of a national pipeline, and it's a decision for the federal government.

Bernier said he'd use constitutional provisions granting federal jurisdiction over modes of interprovincial transportation to ensure construction of the pipeline, if the project is revived.

Bernier said Parliament can overcome local opposition and exercise its authority by declaring any project to be for the general advantage of Canada.

Progressive Conservative Premier Blaine Higgs has been pushing to restart the project, which would see western crude piped to refineries in eastern Canada and an export terminal in Saint John.

Bernier said Prime Minister Justin Trudeau agrees with the position of the Quebec government, and Conservative Leader Andrew Scheer would never propose using federal powers to push the project through.

"He is just too afraid of the pushback from his Quebec MPs, and getting bad press in Quebec," said Bernier, who bolted the Conservatives last August.

Bernier also spoke about equalization, saying it's time to reduce payments to the provinces and stop rewarding them for not adopting better economic policies.

Bernier said there needs to be an open discussion on the issue, but that wouldn't happen with Scheer and the Conservatives.

"His Quebec MPs would freak out."

During the last federal election, all 32 seats in Atlantic Canada went Liberal. Bernier said he sees an opportunity to draw support from dissatisfied members of the mainstream parties and those who didn't vote in the last election.

"There's 30 per cent of Canadians that didn't vote in the last federal election. It's a huge market for us. If we have only half of that, it would be great," he said.

David Duplisea, CEO of the Saint John Region Chamber of Commerce, said while the chamber is non-partisan, he heard some things he wanted to hear in the speech.

"The Energy East pipeline, which was critical to our region and we were very disappointed when that was cancelled; also the federal government invoking the Constitution in the best interests of the country," Duplisea said.

Duplisea said the chamber has invited every leader to speak before the election.

Bernier had scheduled a rally with supporters Thursday night in Saint John, and another on Friday in Halifax.