Baloney Meter: Claims on interprovincial trade barriers range from $2B -$50B 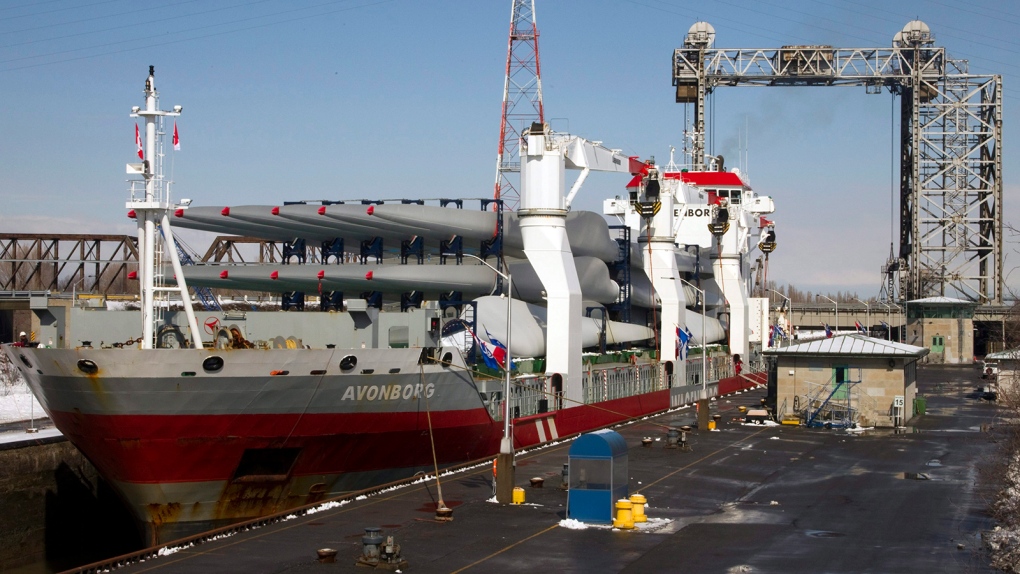 The Avonberg waits with its cargo of windmill parts in the locks as the St. Lawrence Seaway opens for its 53rd season in St. Lambert, Que., Tuesday, March 22, 2011.(Ryan Remiorz / THE CANADIAN PRESS)

OTTAWA -- "It has been estimated that internal trade barriers can add up to a $50-billion annual hit to Canada's economy," according to an Industry Canada news release issued June 17, 2014. The claim is made often and almost always without attribution.

But is the claim correct? And what economic study estimated the cost of the myriad rules, regulations and outright protectionism designed to prevent such things as B.C. wine from competing with Ontario's own at near $50 billion?

To be fair, Industry Minister James Moore has of late tended to describe the costs in terms of "tens of billions of dollars" rather than a specific number. And other calculations that have appeared in news coverage include $2-$3 billion and $14 billion.

The issue is significant since Moore and the three western-most premiers have made tackling internal trade barriers a top economic priority so that Canada will be a more prosperous nation.

It has become such an article of faith that -- in Moore's own words, "We have greater free trade access for foreign investors and foreign firms wanting to do business in Canada than often Canadian firms have" -- few question the claim anymore.

The Canadian Press has examined the origins of the claims and put the $50 billion number to its baloney meter test.

Spoiler: On a scale from "no baloney" to "full of baloney," the claim would appear to meet the criteria for a " full baloney" grade -- the statement is completely inaccurate. (See methodology below.)

In 2006, the Senate banking, trade and commerce committee held hearings on interprovincial trade, and heard a wide range of expert views about how much barriers were costing the economy.

Ron Parker, who was then visiting senior assistant deputy minister of Industry, testified that most studies he's seen dating back to the 1980s and 1990s placed the cost at 0.2 or 0.3 per cent of the economy, or about $2 billion to $3 billion. He acknowledged that one estimate, from the Canadian Manufacturers and Exporters, gave a higher number of just under one per cent of GDP.

Meanwhile, Alberta's own assessment in 2008 was that interprovincial trade barriers cost Canadians $14 billion.

And the Macdonald-Laurier Institute in 2011 put the tally at about $8-billion.

All are well south of $50 billion. So where did that number come from?

One clue: the Senate committee devoted time discussing a 2005 Conference Board report on the liberalization deal between British Columbia and Alberta -- called TILMA -- which was estimated would boost B.C.'s economy by 3.8 per cent.

If that were extrapolated across the country, a back-of-the-envelope calculation of the impact would come close to $50 billion.

The committee never produced a report, but in the record of June 15, 2006 there was a statement from then-senator David Angus in which he tells a witness he believes the costs are enormous.

"I do not know whether I buy into the one per cent of GDP number," he says. "I think it is much higher. Let us say it is three per cent, four per cent or five per cent ... It may be $50 billion."

Asked to recall the statement, the former senator replied by email that he may have been using the numbers to make a point.

"I was basically taking high numbers out of the air to emphasize what I considered then and still consider to be a major Canadian anomaly and a stark economic problem!" he wrote.

Ironically, an Industry Canada paper dated November 2013 by Andrea Pierce of the small business branch cites the Alberta estimate of $14 billion, although she is careful to state that "no consensus exists."

Pierce's paper does seem to undercut one myth, however.

"It has often been said that trading with other countries is easier and less expensive for Canadian businesses than trading with neighbouring provinces; however, findings suggest that significantly more exporters trade internally than those that do not," she writes.

Paul Ledwell, the executive vice president of Canada's Public Policy Forum, says there is no reliable data on how much internal trade barriers may be damaging the economy.

He should know. The Forum held a one-day symposium on the issue last June that was attended by about 150 policy-makers, economists, interest groups and think-tank officials, and none had the answer.

Ledwell said the Forum commissioned several papers on internal barriers, including asking two U.S. economics professors, Yoto Yotov of Drexel University and James Anderson of Boston College, to come up with a definitive number. They produced a detailed road map of how it might be done, but not a conclusion.

"We had practitioners from different industries, provincial trade leaders, economists and other experts who are spending their time analyzing this and everybody talked about the range, that it could be as little as $3 billion and as high as $49 billion," he said.

"The problem is that nobody's come up with a real number and it's not good enough given the importance of the issue."

Advocates for removing trade barriers within Canada, including improved labour mobility, have tended to seize on the highest estimates possible to buttress their case for action.

Critics such as labour economist Erin Weir believe there is no proof that trade barriers are a major impediment to economic growth. Weir says even $3 billion may be too high.

But the truth is that nobody knows the extent of the impact because little substantive research has been done -- and what has been done is years, even decades, old.