With an eye towards Iraq’s growing economy and oil sector, the Canadian government announced the opening of a new diplomatic mission Monday, as Foreign Affairs Minister John Baird became the second cabinet minister to visit the country this year.

The mission will be housed in the British Embassy in Baghdad, and will be overseen by new charge d’affaires, Stephanie Duhaime.

Boosting diplomatic ties with Iraq will give Canadian businesses access to a growing market, which needs the services of Canadian construction and engineering companies, among others.

“Canada’s trade and investment interests in Iraq have strong potential, including in the country’s north, where we will expand our dialogue with leaders in Erbil,” Baird said in a statement released by the Foreign Affairs department. “To pursue our interests, we know that Canada needs to be on the ground in Baghdad.”

Canada’s ambassador to Iraq will continue to be based in Jordan.

Bessma Momani, senior fellow at the Centre for International Governance Innovation, said Canadian companies across all sectors, including oil, health care and education, are in demand throughout the Middle East.

“I think it’s showing that there’s a change in the security situation, things are obviously getting better. And there’s a huge potential there for Canadian businesses, not only in oil and manufacturing, but also there are great opportunities to take advantage of Iraq’s young consumer market.”

Momani noted that it is “also a great thing for the Iraqi people to see an important country come back to Baghdad.”

Momani also pointed out that because Iraq is a close ally of Iran, it helps to have a diplomatic mission in Baghdad to keep tabs on Tehran.

Critics say, however, that by having the Canadian and British flags flying over the same embassy, the opening of the new diplomatic mission will make Ottawa look like a junior partner on the international stage.

Canada already shares an embassy space with the U.K. in Mali, Haiti and Myanmar.

According to Canadian officials, it would cost $25 million to establish a small embassy in Baghdad due to the added security costs.

Immigration Minister Jason Kenney paid a surprise visit to Baghdad earlier in March and upon his return hinted at a new diplomatic post in the city, saying it would help with processing refugees from the region.

Kenney said the number of refugees Canada accepted in 2012 dropped because it had to close its embassy in Damascus due to the ongoing conflict in Syria. The Damascus embassy was a central processing point for Iraqi refugee applicants.

“I’d love to see a Canadian presence on the ground in Baghdad,” Baird told CTV’s Question Period on Sunday, before the new mission was announced. “I think that would be tremendously important to the future of our economic relationship and trade, as well as people-to-people ties.”

Baird’s stop in Baghdad Monday was part of a broader tour of the Middle East. During a stop in Amman, Jordan over the weekend, Baird pledged an additional $13 million from Canada to help Jordanian officials deal with the hundreds of thousands of Syrian refugees who have arrived in the country over the past two years. The money was in addition to the $11.5 million Canada had already given to help with the refugee crisis.

Baird was also in Jordan for the inauguration of Canada’s new embassy building in Amman.

He is still scheduled to visit several other countries on his trip, including the United Arab Emirates, Qatar, Bahrain, Cyprus and Israel.

With a report from CTV’s Ottawa Bureau Chief Robert Fife. 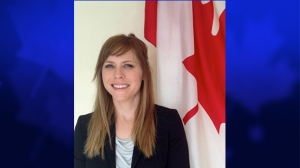