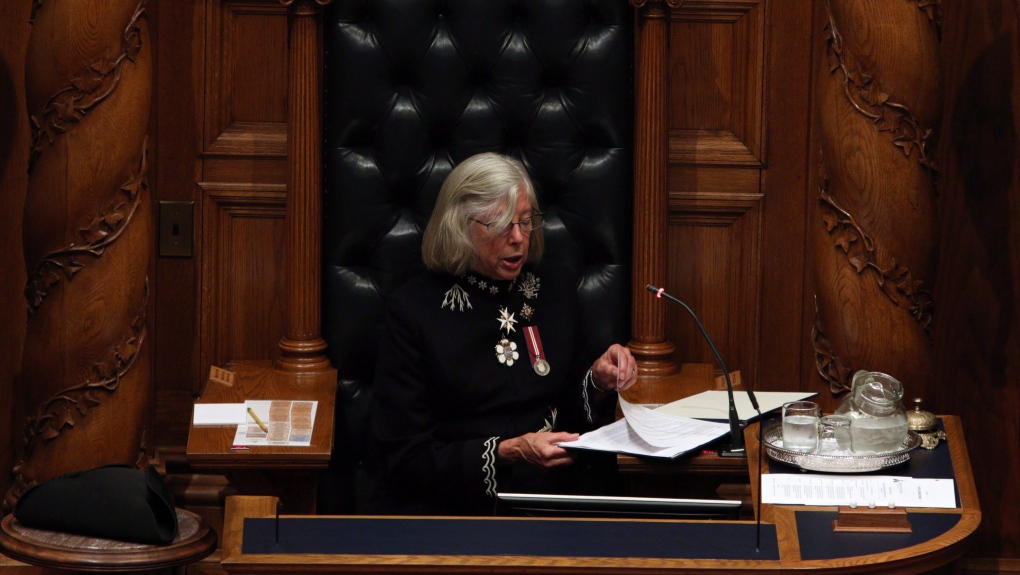 Lt.-Gov. Judith Guichon delivers the speech from the throne in the legislative assembly in Victoria, B.C., on Friday, September 8, 2017. (Chad Hipolito/THE CANADIAN PRESS)

VICTORIA -- Premier John Horgan introduced a plan Tuesday to make life in British Columbia more affordable, but it was overshadowed by the unfolding dispute with the Alberta and federal governments over the Trans Mountain pipeline expansion project.

The pipeline issue dominated questions directed at Horgan moments after the New Democrat's throne speech was delivered, outlining his government's quest to make life affordable by investing in housing and child care.

Horgan said he wanted to lower the temperature in the fight over the $7.4-billion expansion project. The dispute has already prompted Alberta to ban imports of B.C. wine and Ottawa to send bureaucrats to the West Coast for meetings with provincial government officials.

He said B.C.'s desire to consult about how it can better prepare for a catastrophic event such as an oil spill has led to more discussions than he had anticipated after Alberta Premier Rachel Notley "dialled up" the dispute.

Notley has called a news conference Wednesday to discuss the issue.

Opposition Leader Andrew Wilkinson, making his first appearance in the B.C. legislature since being elected Liberal leader earlier this month, said the minority government is scaring off investors with its pipeline conflict.

"What the B.C. government has done is throw a wrench into a federally approved project," he said. "We've seen the consequences of this rather rash and poorly considered action that has now triggered a trade war with Alberta."

Five B.C. organizations, representing an array of businesses, issued an open letter to Horgan on Tuesday expressing their "deep concern" about the government's opposition to the pipeline.

"Failing to respect the rule of law and the largely federal jurisdiction over this project is not only deeply unfair to the stakeholders who respected the process, but also represents a fundamental departure from what it means for B.C. to be part of Canada," the letter says.

It was signed by the leaders of the Independent Contractors and Businesses Association, the Canadian Federation of Independent Business, Canadian Manufacturers and Exporters, the Business Council of British Columbia, and the BC Chamber of Commerce.

Horgan said he will not let the pipeline issue deter his efforts to improve affordability in B.C.

Tuesday's throne speech said housing is the greatest challenge to affordability across the province.

"Young families wait longer to have children, or give up their dreams of home ownership because they cannot afford to pay for both," Lt. Gov. Judith Guichon said in reading the speech from the throne.

"Businesses cannot grow when the skilled workers they need are shut out by the high cost of housing. Renters are afraid of eviction or unexpected rent increases that will force them to relocate when prices are sky high and vacancies hover at record lows."

Legislation will be introduced to crack down on tax fraud, tax evasion and money laundering in the provincial real estate market, he said.

Plans are also in the works to ensure that people looking to profit from B.C.'s real estate market also contribute to housing solutions, Horgan said, adding that the changes are not aimed at homeowners who pay property taxes.

"It's money coming from outside of our economy that's distorting the value of our property," he said. "That's what we want to discourage."

The speech said the results of real estate speculation are evident across B.C. with distorted markets, high prices and empty homes.

Wilkinson said the speech provided few details about the government's housing plans, other than confirm an election promise of building 114,000 homes within a decade and 1,700 this year.

"At that rate, it will take 67 years to deliver on that promise."

Horgan said the government will also make the largest investment in child care in B.C.'s history.

The move to affordable, quality care will include the government converting unlicensed spaces to licensed, regulated care, he said.

"Safe, affordable, licensed child care will become B.C.'s standard, giving parents the peace of mind they need and quality care they can rely on," Guichon said in reading the throne speech.

The speech also said the government will pursue its innovation goals with plans to create 2,900 new technology related spaces at colleges and universities throughout B.C.