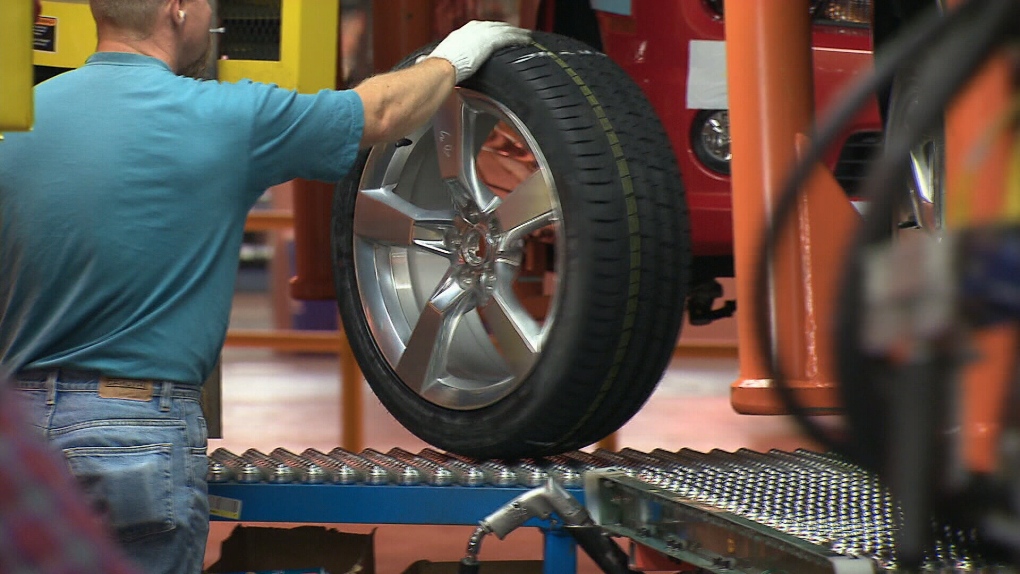 TORONTO -- Canada's automakers appear to be the big winners from a renegotiated trade pact between Canada, the U.S. and Mexico, while steel and aluminum makers and dairy producers have less to celebrate.

The breakthrough deal reached Sunday night, that U.S. President Donald Trump said he plans to call the United States Mexico Canada Agreement, exempts a percentage of eligible auto exports from tariffs, one of the biggest wins in the new deal, said David Adams, president of Global Automakers of Canada.

"One of the largest things is just having certainty now in terms of what the trading relationship is, and what the business environment is going to be going forward. Because business desperately needs certainty and uncertainty is anathema to getting things done."

The new deal makes enough Canadian auto exports tariff-free to be a de facto exemption, and gives hopes that metal tariffs could be reversed, said Frederic Bastien, an analyst at Raymond James in a note.

"This a victory for Canada because that amount is actually well above what we currently send south of the border. That gives us confidence a side deal on Canadian steel and aluminum can also be reached before the new NAFTA is ratified."

The terms reached between the U.S. and Mexico on higher wage thresholds will also be positive for Canadian producers, said Unifor president Jerry Dias, who welcomed the deal.

"The threat of capricious auto tariffs has been lifted, stabilizing future investment" said Dias in a statement.

Prime Minister Justin Trudeau said in a press conference that the auto sector was a key priority in negotiations.

"Protecting our auto industry was one of the core concerns that Canadians had about getting to a deal, and we're glad to say that we have significant protections."

Steel and aluminum producers, however, came away disappointed with no deal in place to lift the tariffs the U.S. imposed on their products at the end of May.

"Certainly disappointed because they didn't agree on a solution on the 232 sanctions regarding aluminum and steel," said Jean Simard, CEO of the Aluminium Association of Canada.

United Steelworkers Canadian director Ken Neumann was more direct, saying Canada "sold out" steel and aluminum workers by not getting the 25 per cent steel tariffs and 10 per cent aluminum tariffs removed.

"It appears Canadian steel and aluminum workers are among those being sacrificed in the concessions made by the Liberal government in this deal," he said in a statement.

Most critical of the deal was the dairy industry, which railed against expanded U.S. access to the domestic dairy market and the elimination of competitive dairy classes.

Bruno Letendre, head of the association that represents Quebec's milk producers, said the concessions are the equivalent of 13 days fewer production for his members.

The measures will have a "dramatic impact" on dairy farmers and cause the industry to shrink, said Pierre Lampron, president of Dairy Farmers Canada, in a statement.

Ontario and Quebec premiers criticized the dairy concessions as a bad deal for farmers, though Foreign Affairs Minister Chrystia Freeland said at a press conference Monday that they would be made whole.

"Our supply managed producers will be fully compensated, because that is the fair thing to do," she said without providing details on planned compensation.

For the general manufacturing sector, the sentiment is one of relief, said Dennis Darby, president and CEO of Canadian Manufacturers & Exporters.

He said he hopes the aluminum and steel tariffs can be resolved shortly, but that the manufacturing industry didn't lose anything in the new deal.

"At a minimum we haven't lost any ground. Versus a very unpredictable and protectionist U.S. administration, I think Canada did as well as it could."

Markets took the news of the deal in stride, with the S&P/TSX composite index closing 0.2 per cent higher while the loonie posted an average gain of 0.86 of a US cent than Friday.

"The markets are reacting positively and with relief but they're certainly not euphoric by any means. They're happy but not delighted," said Doug Porter, chief economist at the Bank of Montreal.

"For the most part, this was a defensive deal for Canada," he said in an interview.

"We had a NAFTA deal that was working reasonably well so we will call it a win because we were able to retain the key parts of the existing NAFTA deal in terms of our access to the U.S. market."

The lifted uncertainty could be enough to prompt more business investment, said RBC senior economist Nathan Janzen in a note.

"While it's possible to conclude that the deal consists largely of tweaks to the old agreement, we believe reduced uncertainty about the U.S.-Canada trade relationship could prompt businesses to put more investment dollars to work and will support exports."

With files from Linda Nguyen

How Trump's Freeland broadside factored into getting a trade deal done

Highlights of the United States-Mexico-Canada Agreement

Here are the winners and losers in the new U.S.-Mexico-Canada Agreement

Reaction to USMCA deal rolls in: Not a 'great win,' but a 'great save'