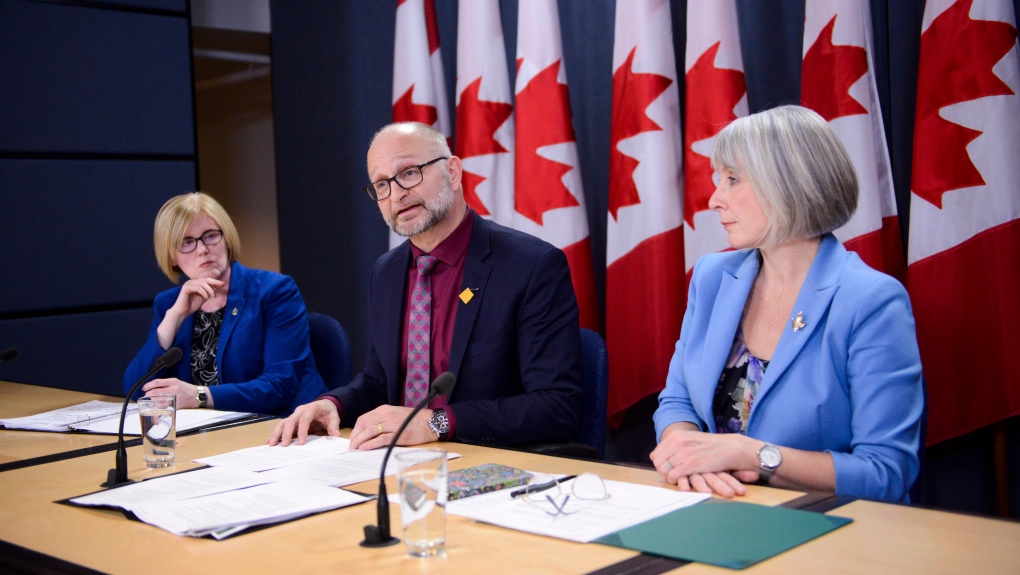 Carla Qualtrough, Minister of Employment, Workforce Development and Disability Inclusion, left to right, David Lametti, Minister of Justice and Attorney General of Canada, and Patty Hajdu, Minister of Health, during a press conference at the National Press Theatre in Ottawa on Monday Feb. 24, 2020. THE CANADIAN PRESS/Sean Kilpatrick

OTTAWA -- Assisted-dying legislation sends the wrong message to Indigenous communities, advocates said Tuesday as voices opposed to the bill continued to ring out on Parliament Hill.

Indigenous elders work hard to tell young people that suicide should not be an option, and the medical assistance in dying (MAID) bill says the opposite, said Tyler White, chief executive officer of Siksika Health Services, which provides health services to Indigenous communities in Alberta.

“Extraordinary efforts have been made in suicide prevention in our communities,” he said.

“The expansion of MAID sends a contradictory message to our peoples that some individuals should receive suicide prevention, while others suicide assistance.”

The new bill follows a Quebec court ruling striking down the existing legislation on medically assisted death on the grounds that it was too restrictive. The court gave the government until Dec. 18 to implement a new regime.

The Liberals' offering, Bill C-7, expands the categories of those eligible for the procedure, opening it up to people whose deaths aren't reasonably foreseeable.

The new bill imposes strict guidelines for people seeking assisted death as part of that category, including a 90-day waiting period.

Dr. Thomas Fung, a physician who works with Indigenous patients, said that is too short.

He cited the case of a patient of his with lung disease, who is short of breath doing even simple tasks. He needs oxygen at home but he isn't eligible for government assistance to pay for it because his condition isn't bad enough yet.

He could wait for that to happen, Fung said. But he could already be eligible for a medically assisted death under the new legislation.

It would “go against one's conscience” to provide one, given there are other therapies that have not yet been tried and that could improve the patient's life, Fung said.

But arranging the care the patient needs, such as counselling and medication, will take more time than the law allows, in part because of the rural setting.

During community consultations on the bill earlier this year, the government heard from people in many Indigenous communities who had concerns with the legislation.

“Many spoke about the harmful experiences that Indigenous individuals have had with the health-care system,” said the government report on the consultations.

“This includes having procedures against their will. There are also ongoing challenges in getting culturally safe care.”

White also said doctor-assisted death runs contrary to Indigenous beliefs about life, and like some opponents of the bill, stressed the need for physicians to be able to object to providing it if it violates their consciences.

That is especially important in the context of also allowing Indigenous people the right to self-determination, he said.

“Efforts to suggest to our people that MAID is an appropriate end to life is a form of neo-colonialism,” he said.

Fung and White were part of a group of advocates who held a news conference on the bill Tuesday, the latest in a series of events organized by those opposed to many of the bill's provisions.

Disability advocates, some of whom were also present Tuesday, are among those who have also opposed the bill, arguing it sends a message their lives have little value.

Mental health professionals have also voiced their concerns, arguing in recent days that the express exclusion of access to doctor-assisted death by people suffering solely from mental illness amounts to discrimination.

The House of Commons justice committee wrapped up its scrutiny of the bill on Tuesday. Conservative, NDP, Bloc Quebecois and Green MPs had proposed amendments to the bill but the committee rejected all but two relatively minor changes.

Conservative justice critic Rob Moore said he was disappointed the committee rejected his party's attempts to restore safeguards, such as the 10-day reflection period for individuals who are near death, and to add extra protections, such as a 120-day reflection period, for those who are not. The latter, he said, would have responded to the concerns of disability rights groups.

The Senate's legal affairs committee is scrutinizing the bill this week, before it is passed by the Commons, in a bid to help Parliament meet the Dec. 18 deadline.