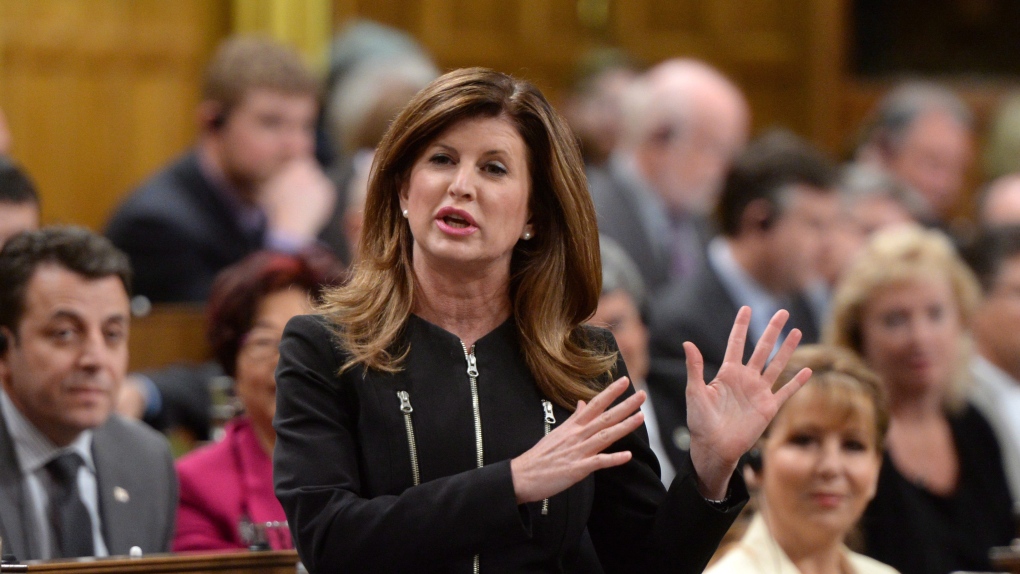 Interim Conservative Leader Rona Ambrose asks a question during question period in the House of Commons on Parliament Hill in Ottawa on Monday, May 2, 2016. (THE CANADIAN PRESS/Sean Kilpatrick)

OTTAWA -- Thanks, but no thanks -- that's interim Conservative leader Rona Ambrose's reaction to a nascent campaign seeking to allow her to run for permanent leadership of the party.

A small group of Tory MPs launched a drive last week to open the party's constitution to change the rules that prevent interim leaders from seeking the top job, a move designed specifically to encourage Ambrose to run.

But her spokesman said it's not in the cards.

"Rona is obviously happy to be receiving support for the work she's been doing as interim leader because it shows that the team is on the right track," Mike Storeshaw said.

"But her decision on the permanent leadership was made a long time ago, and it hasn't changed and won't change. She's not going to be a candidate for it."

The party's constitution prohibits an interim leader from becoming a candidate in the leadership process.

To change the rules requires 100 delegates from 100 ridings to sign a petition, and that's just the first step. From there, the issue would be discussed at the upcoming Conservative policy convention in Vancouver and if it made it out of a constitutional review, the broader convention would need to vote and approve the change.

Tory MP Scott Reid, who is among those leading the effort to draft Ambrose, said the group believes she is best placed to continue to oppose the Liberal government and to eventually take the reins of government altogether.

Ambrose wasn't told about it so no one would question her motives when she sought interim leadership last fall, he said.

No one doubts that when she ran for that job she didn't want the full-time position, but Reid said he and others believe she should change her mind.

"We have to convince her this is the right thing to do," he said.

Reid's office said the group will continue collecting signatures until they hear from Ambrose directly.

The campaign launch appeared to catch many Tory MPs off guard, including several considering their own run.

Quebec Tory MP Maxime Bernier, who has officially registered to run for the permanent leadership, said Ambrose has the support of caucus -- as interim leader.

"The rules of the game are there and I don't think it's time to change it," he said.

Some leadership hopefuls are gathering next week in Toronto for a forum organized by MP Bob Saroya, one of only a handful of Tories who won a Toronto-area riding in the last election.

Just as the region was a key battleground in that campaign, it will also be a hotly contested area for the 2017 leadership vote as rebuilding party support in the greater Toronto area is crucial for the Conservatives ahead of the next general election.

Saroya said he thinks Ambrose is doing a terrific job as interim leader but the question of whether she should seek the permanent job isn't his to answer.

To date, only two people have formally registered in the race -- Bernier and Ontario MP Kellie Leitch. Ontario MP Michael Chong is expected to declare his candidacy ahead of the May policy convention. Others thinking about a run include MPs Tony Clement, Andrew Scheer, Jason Kenney and Lisa Raitt.