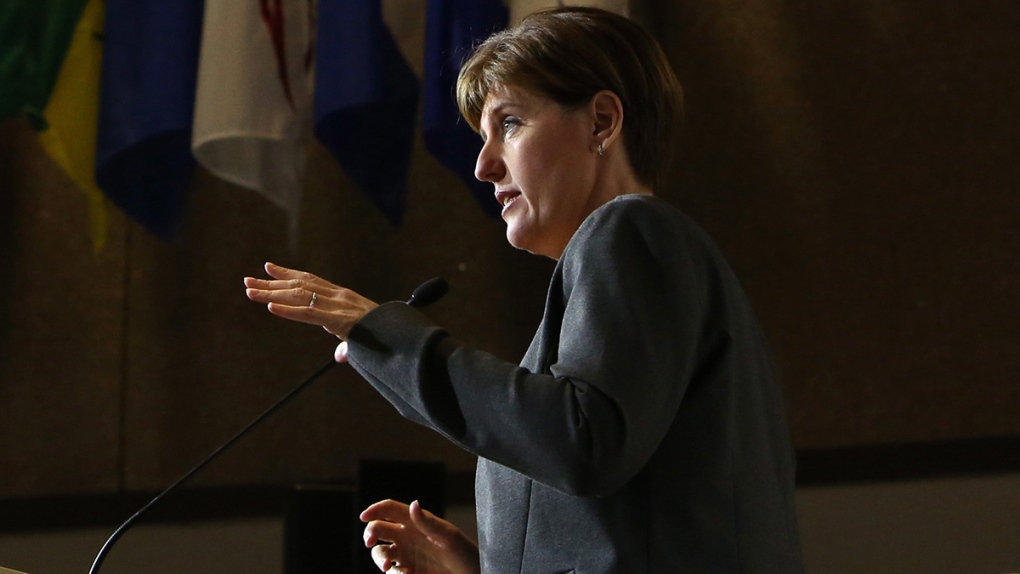 International Development Minister Marie-Claude Bibeau holds a news conference to announce $100 million in humanitarian funding to the United Nations High Commissioner for Refugees to help respond to needs in shelter, protection and health for refugees affected by the Syrian crisis, in Ottawa on Thursday, Nov. 26, 2015. (Fred Chartrand / THE CANADIAN PRESS)

OTTAWA -- Development Minister Marie-Claude Bibeau is staying firm on Canada's commitment to sexual and reproductive health rights in the face of criticism by the Canadian Conference of Catholic Bishops, in a letter protesting the government's focus on contraceptives and abortion in its aid policy.

"Contraception and even abortion is only a tool to end poverty," Bibeau said in an interview with CTVNews.ca. "We ... have to give [women] the control over their lives. So we shouldn't look at contraception as the objective. This is not the objective. This is only a tool to reduce poverty and inequality and to make an impact in terms of development and peace and security in the world."

Speaking from London, where Bibeau is attending the Family Planning Summit, the minister said while the bishops addressed their letter to Foreign Affairs Minister Chrystia Freeland, she's thinking of issuing her own official response in addition to Freeland's.

"It's important to have the conversation with the religious leaders so we can understand each other," Bibeau said.

"We have to have honest conversations with our religious leaders and I'm more than happy to have this discussion in Canada."

The letter from the bishops, the second one they've written to address the federal government's foreign policy pronouncements, criticized Freeland's speech in the House of Commons on June 6, when she laid out the government's objectives and reasoning behind its goals.

"You equated women's rights with the right to abortion and 'sexual reproductive rights' and said '[t]hese rights are at the core of Canadian foreign policy'," Douglas Crosby, president of the Canadian Conference of Catholic Bishops, wrote to Freeland in a June 29 letter.

"Has Canada forgotten that for a considerable population (both within Canada and abroad) the unborn child is regarded as a human being created by God and worthy of life and love? This moral position can be found among Jews, Muslims, Hindus, Orthodox Christians, a number of Protestant Christians, Roman and Eastern Catholics, in addition to many other people of good will, including non-believers," Crosby wrote.

He pointed to a March commitment by Bibeau and Prime Minister Justin Trudeau to devote $650 million in Canada aid over three years to abortion services and sexual and reproductive health.

"This amount contrasts sharply with his government's response to the severe food shortages in South Sudan, Yemen, northeast Nigeria and Somalia, for which it had only pledged $119.25 million – a difference of $530.75 million," Crosby wrote.

Bibeau contested that amount, pointing out the government's humanitarian assistance budget for the most affected countries is $800 million a year, as opposed to $650 million over three years for contraceptives and sexual health.

"The objective is to end poverty," she said. "[To do so] we have to reduce inequalities, we have to empower women, we have to defend women's rights."

Bibeau announced the first tranche of that $650 million during her visit to London, committing $241.5 million over several years to 19 projects. The programs include everything from creating 80 new birthing centres in remote areas of Afghanistan, which will offer contraceptives as well as pre- and post-natal care, to preventing early and forced marriage in Benin, to providing comprehensive sexual education to girls in the Democratic Republic of Congo.

Last week, Bibeau was in the DRC, where she saw firsthand the results of severe gender-based violence against women and girls. But that's only one reason why this funding is vital, she said.

"One of the reasons adolescent girls stop going to school is because of early pregnancy," she said.

That could be because of violence or early marriage, whether due to culture or because the girl's family is so poor that her parents arrange for it, hoping she and the children remaining at home will have a better life.

"This is why we cannot just be blind and think this is not happening. We really have to start the conversation and make sure that adolescent boys and girls have extensive sexual education to start with, that they have access to contraception because we don't want girls to get pregnant or get an infection."

The Canadian development focus on gender equality, laid out by Bibeau in early June, comes as the U.S. reinstates the global gag rule, under which aid organizations lose their American funding for providing abortion services, even if they use funding from other sources to do so. It also bars them from even discussing it.

U.S. President Donald Trump's administration has also proposed cutting a third of the aid and state department budget, and cutting family planning funding from the aid budget. Philanthropist Melinda Gates, of the Bill and Melinda Gates Foundation, told the Family Planning Summit that she's "deeply troubled" by the cuts.

"I've seen it myself. I've had testimony from women saying that family planning changed, really, their lives," she said.