After leadership vote loss, Mulcair gets standing ovation in Parliament 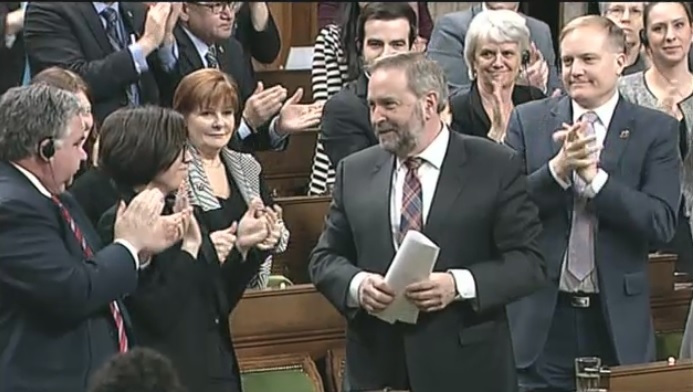 Thomas Mulcair receives a standing ovation from the entire House of Commons on Tuesday, April 12, 2016. The moment marked Mulcair's first speech in Parliament since he lost his bid to remain leader of the NDP at a party convention in Edmonton.

Thomas Mulcair received raucous applause from MPs of all political stripes as he rose to speak in the House of Commons Tuesday, marking a warm welcome back after a crushing weekend for the NDP leader.

It was Mulcair’s first appearance in Parliament since failing to earn his party’s support at a critical leadership review in Edmonton Sunday. He will remain at the party’s helm until a new leader is chosen sometime in the next two years.

But the cross-party standing ovation lasted only a brief moment until partisan lines were quickly redrawn.

“Mr. Speaker, after years of ethically challenged Conservative rule, the Liberals promised to do things differently,” Muclair began, before being cut off by outbursts of laughter and more applause.

Mulcair is known for holding political opponents’ feet to the fire, and neither his loss in Edmonton nor the applause appeared to soften his resolve.

“Let’s try to calm down, everybody,” said House Speaker Geoff Regan, standing to quiet the room.

Mulcair then dug into the Liberals. He implored Prime Minister Justin Trudeau to ask Justice Minister Jody Wilson-Raybould to return money she’d fundraised at a recent legal event in Toronto and called on more investments to combat tax evasion in response to the recent Panama Papers revelations.

Trudeau responded by saying that Liberals have “always followed all the rules around fundraising” and that $440 million has been allocated for Canada Revenue Agency to fight tax evasion.

Muclair also challenged the Liberals on a perceived lack of support for employment insurance, a service he says many unemployed Canadians don’t qualify for due to complicated government criteria.

Trudeau responded by asserting the government’s commitment to EI and saying that the government is looking at ways to improve the service.