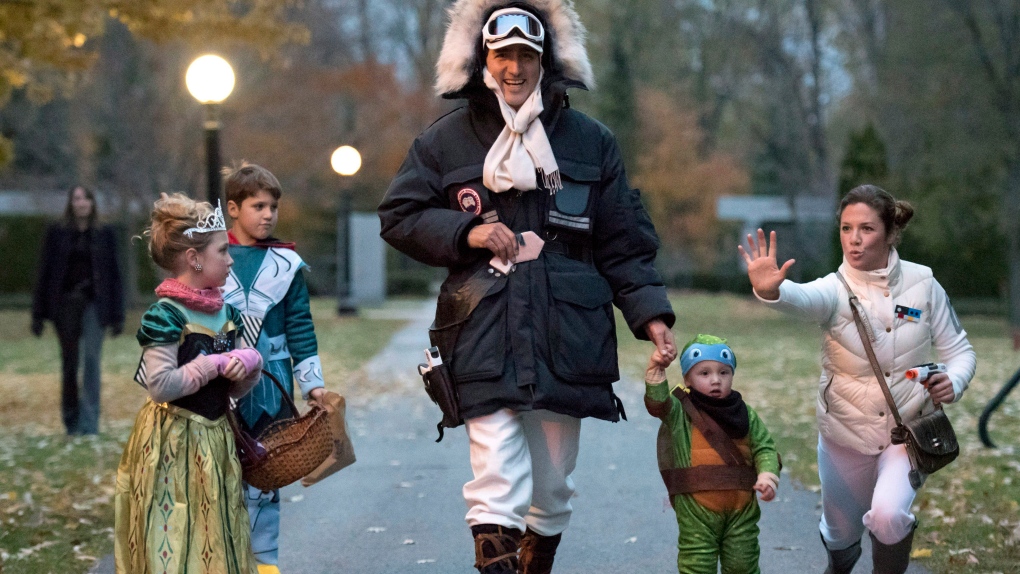 Then Prime Minister-designate Justin Trudeau, dressed as Han Solo of The Empire Strikes Back, and his wife Sophie Trudeau-Gregoire, dressed as Princess Leia, walk with their son Hadrien while trick-or-treating on Halloween in Ottawa on Oct. 31, 2015. (Justin Tang/The Canadian Press)

OTTAWA -- Prime Minister Justin Trudeau has always seemed to relish dressing up for trick or treating with his children but, in the wake of the blackface scandal, he's giving Halloween a miss this year -- publicly anyway.

A spokesman for the prime minister says Trudeau will "be trick or treating with the kids, but not going to Rideau Hall or doing a photo op."

His newfound reticence to be photographed in costume on the night of ghouls and goblins comes after the mortifying revelation during the recent election campaign that Trudeau had on at least three occasions in his youth donned blackface or brownface.

The Liberals were rocked during the first week of the campaign when a yearbook photo emerged of Trudeau in brownface as part of an elaborate Aladdin costume worn to a 2001 Arabian Nights party at the Vancouver private school where he was a teacher.

Another picture and a video of a teenaged Trudeau in blackface subsequently came to light, further damaging his image as a champion of diversity and inclusion.

He apologized profusely for not recognizing at the time that darkening his skin with makeup was a racist act.

"The fact of the matter is that I've always -- and you'll know this -- been more enthusiastic about costumes than is sometimes appropriate," he told reporters at a hastily assembled news conference aboard the Liberal campaign plane on the night that the first explosive photo emerged in a Time magazine article.

That admission seemed to harken back to Trudeau's ill-fated trip to India last year, during which he was roundly criticized for sporting a variety of traditional Indian garb.

However, Trudeau's choice of Halloween costumes since becoming prime minister hasn't generated particular controversy in the past.

Among other things, he has gone trick or treating with his three children dressed as Han Solo of Star Wars fame, and as the pilot in the Little Prince.

Trudeau also once showed up in the House of Commons in a usual business suit, but sporting black-rimmed glasses and a Superman costume peeking out from beneath his shirt.

Trudeau's more private Halloween celebration this year may also reflect a broader strategy to keep a lower profile during his second mandate. Some Liberal insiders believe he's been over-exposed and could benefit from keeping his distance from cameras for a while.

Since winning a strong minority of seats last week, Trudeau has held one post-election news conference but otherwise been invisible as he plots how to navigate through a Parliament in which the Liberals' survival will depend on gaining the support of at least one opposition party on confidence matters.

He intends to swear-in a new cabinet on Nov. 20, but it's uncertain whether he'll recall Parliament before Christmas.

This report by The Canadian Press first published Oct. 31 2019.