After 25 years as president, Sudan's al-Bashir shifts from Iran to Saudi Arabia 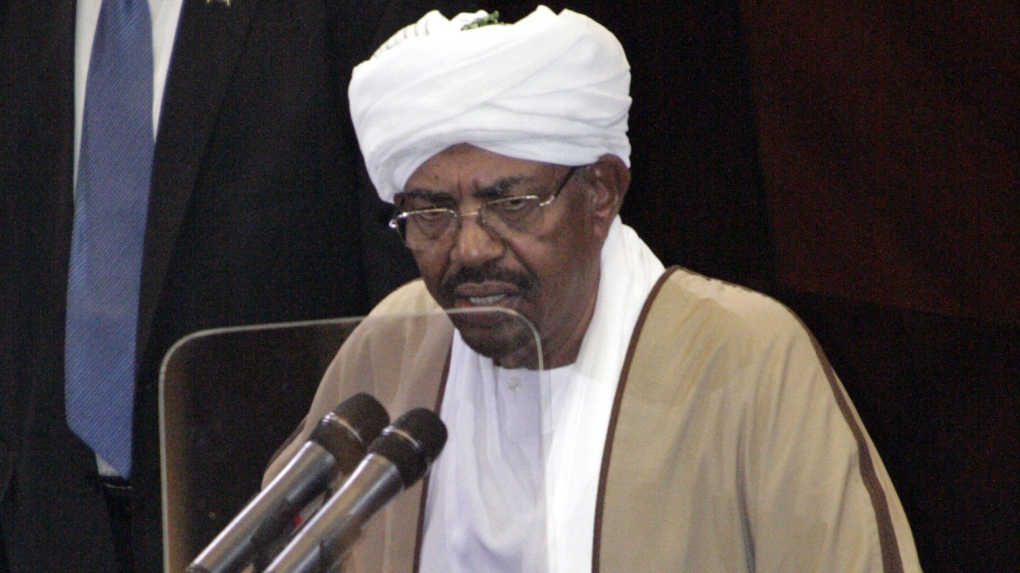 Omar al-Bashir, who was recently re-elected in a landslide that extended his 25-year-old rule, speaks after being sworn in at the Sudanese National Assembly, Khartoum, Sudan, on Tuesday, June 2, 2015. (AP Photo/Abd Raouf)

CAIRO -- Sudanese President Omar al-Bashir on Tuesday was sworn in for another five-year term extending his 25-year autocratic rule, a testament to his ability to survive civil wars, sanctions and an international war crimes indictment.

In his latest manoeuvr to survive, al-Bashir has switched alliances, joining ranks with Saudi Arabia, the region's biggest bankroller, after nearly two decades of strained ties. That means moving away from close relations with the kingdom's rival Iran, which has long used Sudan as a transit route for weapons shipments to armed groups in the region, particularly Hamas.

Shortly before his re-election, al-Bashir threw his support to the Saudi-led coalition waging an air campaign against Shiite rebels in Yemen who are allied to Iran. The Sudanese contribution to the campaign is largely symbolic -- but al-Bashir is likely hoping for Gulf financial support that could keep his beleaguered economy afloat.

"Our relations with Arab brothers have witnessed very positive developments lately, by the grace of God," al-Bashir declared Tuesday in a speech in Omdurman, neighbouring the capital Khartoum, after his swearing-in. By building on the Arab ties, he expressed hopes of eventually normalizing relations with Western nations as well.

Al-Bashir won re-election in April, though opposition parties boycotted the vote. After his victory with an official landslide of 94 per cent of the vote, the opposition said in a joint statement that it will not recognize the results and called on the people to join ranks to "topple" al-Bashir.

In his speech Tuesday, al-Bashir pledged to draft a permanent constitution, combat corruption, improve the economy and end conflicts in at least three war-torn regions -- Darfur in the west, and Kordofan and the Blue Nile in the south and southwest, all of which have armed uprisings against his rule.

He added a gesture to the opposition, saying "the arms of the nation are open to everyone" and promising amnesty to any armed groups who are "genuine" in entering negotiations.

During al-Bashir's quarter-century in power, Sudan has been plagued by rebel movements, and it lost a third of its territory as South Sudan became independent in 2011. International sanctions over support of terrorism and over the Darfur conflict have battered Sudan's economy, which was also hit hard after the break with the south gutted oil revenues.

Local papers hailed the foreign policy shift toward Saudi Arabia. A Sudanese daily, Al-Tayar, described the move as "correcting the political position" of Khartoum. The Saudi news site Sabq praised as a breakthrough a visit by al-Bashir to the kingdom in March to meet with Saudi Defence Minister Mohammed bin Salman.

Still, Gulf rulers appear to be keeping some public distance. They sent only envoys to attend al-Bashir's inauguration, a lower level than even foreign minister. The only senior figures to attend were Egypt's president, Abdel-Fattah el-Sissi, and a handful of African leaders, including Robert Mugabe of Zimbabwe.

"Saudi Arabia wanted to bring Sudan to the Arab square," he said, noting the kingdom was concerned over Khartoum's ties to Iran.

He said that al-Bashir may get some relative financial rewards from warming ties. "The price will be to stop using Sudan to supply weapons to armed groups in the region," he said. But, he added, it is unrealistic to think the Gulf will help him restore relations with the West.

Al-Bashir, who took power in a 1989 coup, is the only sitting head of state facing genocide charges at the International Criminal Court. The charges stem from reported atrocities in the conflict in Darfur, in which 300,000 people were killed and 2 million displaced in the government's campaign, according to United Nations figures.

Relations deteriorated between Sudan and Gulf countries in 1990s, when Sudan along with Yemen allied with Iraq's Saddam Hussein after the invasion of Kuwait.

Ties with Iran complicated relations. In August 2013, Saudi Arabia banned the plane of al-Bashir from crossing its airspace on its way to Iran.

Iran helped supply weapons to al-Bashir in his 1989 coup and has invested in Sudanese water and engineering projects. Though China is Sudan's main arms source, Iran is also a supplier and signed a military relations deal with Khartoum in 2008.

Israel routinely accuses Iran of smuggling weapons to Hamas in Gaza through Sudan, which has a long desert border with Egypt. In October 2012, a suspected Israeli airstrike against a weapons factory in Khartoum, killing four people.

In March, Sudanese Foreign Minister Ali Ahmed Karti insisted Khartoum has only diplomatic relations with Tehran, denying it had ever had any alliance with Iran. "This is mere lie against Sudan," he said.