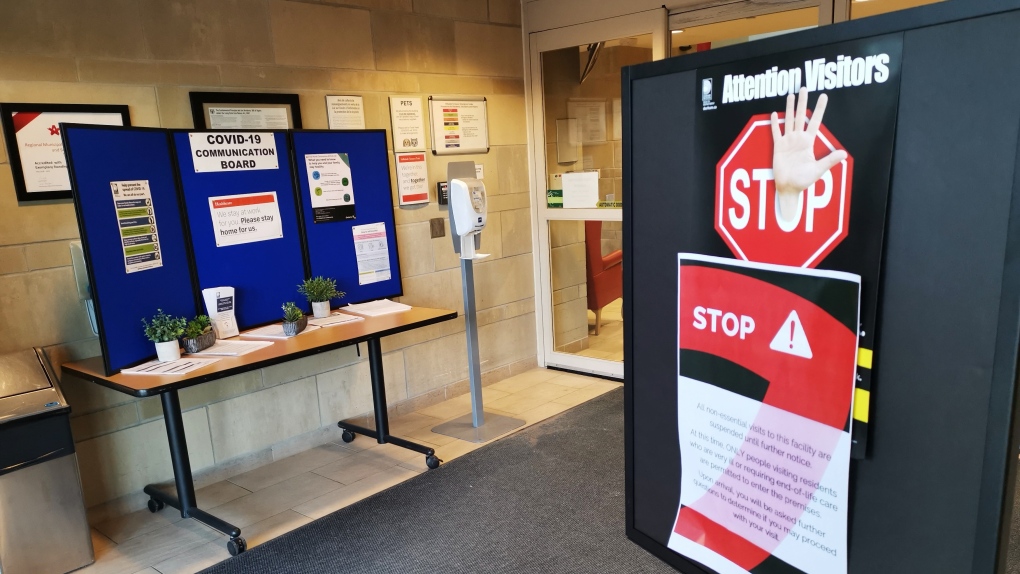 Warning signs and information about COVID-19 along with a hand sanitizing station is shown inside the doors of the Hillsdale Terraces Long-Term Care home in Oshawa, Ont., on Sunday, April 5, 2020. (THE CANADIAN PRESS/Doug Ives)

COVID-19 infections haven't been as widespread in long-term care residences as they were in the spring but the number of outbreaks continues to grow. More than 100 residences are reporting outbreaks currently, including 79 in Ontario, 14 in Alberta, 21 in British Columbia and 19 in Manitoba.

Earlier this month, the federal government asked the Canadian Red Cross to send workers into some care homes in Ontario facing outbreaks, after sending in the military to help out in homes in Quebec and Ontario last spring.

"If we have arrived at a situation where we need to call in the Canadian Armed Forces, and the Red Cross, which is a humanitarian organization, you know, that is normally deployed in war zones, and in developing countries," Green party Leader Annamie Paul said Thursday.

"If we have to deploy those two bodies in order to save lives in our long-term care facilities across Canada, then there is a serious problem."

Since the first wave, both Ottawa and provincial governments have been talking about what to do. In last month's throne speech, the federal Liberals promised national standards for long-term care, but it's a promise not easily kept because health care is a provincial responsibility. Long-term care isn't even part of the Canada Health Act.

The act lays out the principles and requirements of a publicly funded health-care system and provinces that want federal money to help pay for health care are meant to follow its rules.

Paul said including long-term care in the act should be the first step.

"The reason we have the Canada Health Act in the first place is because we recognized all the way back then, that there are some services, some basic needs that are best delivered, and the quality is best assured, when the provincial and federal governments work together," she said. "And so this is clearly one of those situations."

Donna Duncan, CEO of the Ontario Long Term Care Association, said she wrote to Trudeau in early June to ask for federal cash to help with capital improvements and human resources before the second wave of COVID-19 began.

She heard nothing back until last week, when a form-letter response from a Health Canada aide landed in her inbox pointing out long-term care is a provincial responsibility.

"You can't stand up there and say this matters and then say it's somebody else's responsibility," she said. "It's our collective responsibility."

Duncan said the system needs dedicated federal help along the lines of what was offered in 2017 for mental health and home care.

Ottawa did provide $740 million to provinces this summer to help control and prevent infections in long-term care.

NDP Leader Jagmeet Singh said Thursday the federal government can immediately end its own role in the saga by putting a stop to its own for-profit care.

Revera, Inc. owns or operates more than 500 homes for seniors in Canada, the United States and the United Kingdom. It is also a wholly owned subsidiary of the federal Crown corporation, the Public Sector Pension Investment Board.

Singh said Ottawa can immediately end the for-profit nature of care at Revera, and doesn't have to wait for the provinces to do something.

"All of this can be prevented. For-profit homes are far more dangerous. This isn't about jurisdiction," he said at a news conference in Ottawa. "The prime minister can immediately fix this."

Health Minister Patty Hajdu said in question period Thursday that she shares the "deep dismay" of opposition MPs about the conditions in some long-term care homes.

"All long-term care home operators must be held accountable for providing care that protects the lives and dignity of the people for whom they are paid to take care of," she said.