A timeline of the NDP's electoral roller coaster in 2015 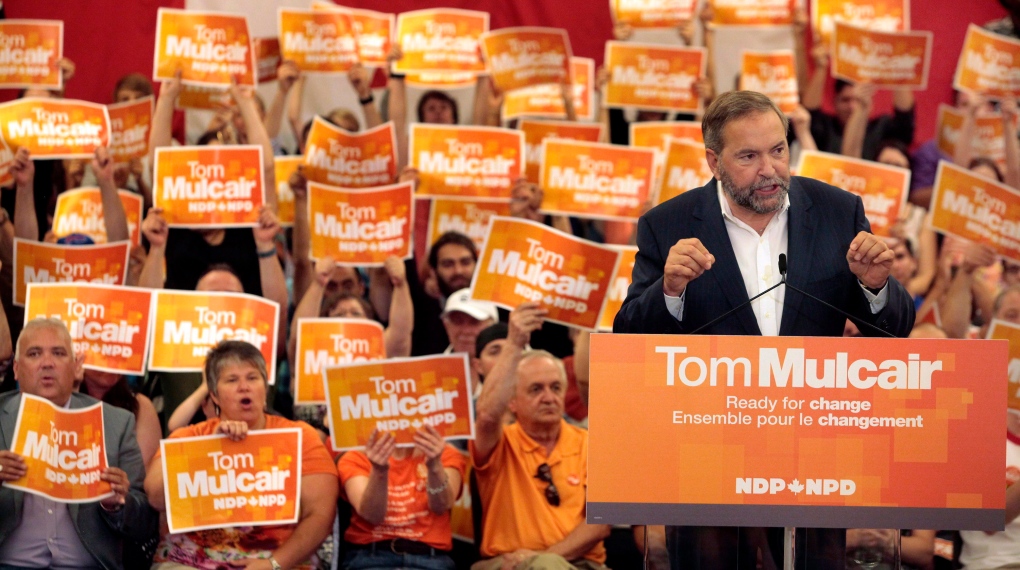 EDMONTON -- A year ago, the New Democratic Party was surfing a swelling wave and Tom Mulcair appeared poised to become the first NDP prime minister in Canada's history. Poll numbers and party donations were rising and everything looked to be cresting at the perfect moment in the election cycle.

But the wave broke and crashed well short of the party's 2011 high-water mark. The NDP finished the Oct. 19 election a distant third and lost more than half its seats in the House of Commons.

Mulcair, blamed for running a cautious, uninspiring campaign, paid the price Sunday as a majority of delegates to the NDP convention in Edmonton voted to hold a leadership contest to find his replacement.

Here's a chronology of the ups and downs of Mulcair's leadership:

Oct. 13, 2011: Mulcair announces his candidacy for the NDP leadership, left open after the untimely death of Jack Layton, who had led the party to its best ever finish -- and official Opposition status -- just a few months earlier. His campaign is based on Mulcair's ability to hang on to the party's 2011 gains in Quebec and lead the NDP to victory in the next election.

March 24, 2012: Mulcair wins the leadership on the fourth ballot, beating out Topp.

April 14, 2013: Justin Trudeau is elected leader of the Liberal party, reviving its fortunes and displacing the NDP in opinion polls and a series of byelections as the alternative to the Conservative government.

May 5, 2015: Rachel Notley leads the Alberta NDP to a historic election victory, ending a 44-year Progressive Conservative dynasty. The result galvanizes the federal NDP, which quickly vaults back into the lead in opinion polls.

May 9, 2015: Mulcair uses the Alberta result to inspire a Montreal rally: "They said we wouldn't be able to pierce through in Alberta. (But) the NDP has just formed the government. And now they're saying we still can't win at the federal level. Let's wait to see on Oct. 19."

June 23, 2015: Polling data suggests Mulcair's personal popularity is at more than 60 per cent, compared with 46 per cent for Justin Trudeau and 32 per cent for Stephen Harper.

July 31, 2015: Elections Canada data on political donations shows the NDP collecting $4.5 million from 48,314 donors in the second quarter of the year, its best quarterly showing ever, both in terms of money and the number of donations.

Aug. 4, 2015: Federal election called for Oct. 19. Most polls suggest the NDP holds a slight lead over the Conservatives and Liberals.

Aug. 25, 2015: Mulcair vows an NDP government would balance the budget every year, in contrast to Trudeau who promises to run modest deficits in order to invest in job-creating infrastructure projects. In retrospect, many New Democrats decide this was a turning point that allowed Trudeau to outflank Mulcair on the left.

Sept. 24, 2015: In a televised French-language debate, tempers flare over the niqab, which the Conservatives want banned during citizenship ceremonies. Mulcair staunchly defends the right of women to wear the head covering, a controversial stand in Quebec.

Sept. 27, 2015: Polls begin to suggest a slippage in NDP support, with the Liberals creeping up.

Oct. 9, 2015: Polls suggest NDP support had slipped to roughly 25 per cent. "We are confident that the NDP is going to win this election and we are confident of that based on my constant travels across the country over the last several months," says Mulcair.

Nov. 24, 2015: As leader, Mulcair takes responsibility for the disappointing elections results but insists he'll remain leader. "Yes, I will stay on, I've got very strong support in the party," he says in a radio interview. "The party membership has always been there for me and I expect them to be there in April."

Feb. 9, 2016: Party president Rebecca Blaikie releases an interim post-mortem report on what went wrong with the NDP campaign. Report says the NDP, in part due to Mulcair's balanced budget pledge, represented "cautious change" whereas the Liberals were perceived as "real change" by voters wanting a dramatic break from the Conservative era.

March 2, 2016: Polling suggests NDP support has fallen since the election. One survey had the party at just over 14 per cent, while another had it just under 12 per cent.

April 10, 2016: Fifty-two per cent of delegates at the NDP convention vote to hold a leadership contest to replace Mulcair; just 48 per cent support his continued leadership.