A peek inside Centre Block renos, from 3D imaging to discoveries behind the walls

OTTAWA -- What’s set to be at least a decade-long renovation of Parliament Hill’s crown jewel, Centre Block, got underway a year ago. So what has been done so far? CTVNews.ca got an exclusive look inside the headquarters where the team of 300 or so designers, construction staff and planners are working on the massive project and using virtual reality software to help plot out the modernization. We also got an update on the archeological finds uncovered on the grounds.

From candy bar wrappers and cigarette boxes found behind walls and ceilings, to an ever-evolving 3D model of nearly every inch of the sprawling Centre Block, here’s what has been going on behind closed doors and construction scaffolding over the last 365 days or so.

The work that is, or will be happening both inside and outside includes aesthetic touchups, cleaning, removing asbestos from the walls and updating the plumbing and electrical systems, but also ensuring the building is accessible and seismically sound.

According to Public Services and Procurement Canada (PSPC), the activity so far has been focused on three central aspects, some of which was underway years before Centre Block actually shut down:

The progress so far also includes some initial demolition to run the temporary mechanical and electric systems that the building will operate on while the construction is underway, and soon the actual work on what are considered “lower heritage” areas like the office spaces, is getting underway.

“We're working as quickly as we can and the program remains on track. We've achieved all the key milestones that we said we would to date,” Jennifer Garrett, the director general for the Centre Block program, told CTVNews.ca.

She said that come spring the department should have a good idea about what the design of the upgraded space will look like, but assured that while there will be modern updates, those will largely be in the behind-the-scene spaces like administration, whereas the iconic public spots like the Rotunda and House of Commons foyer will look largely the same when the work is all done.

3D imaging, VR software in use 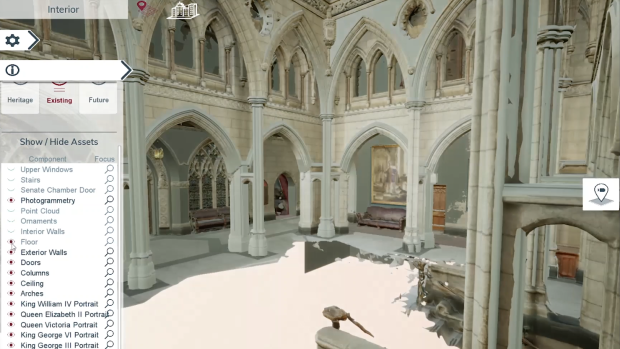 A still image of the Centre Block Senate Foyer in the BIM. (Courtesy of Public Services and Procurement Canada)

A key aspect of the project so far has been creating what’s known as the building information model, or BIM, of Centre Block. This has been done by blending photogrammetry, essentially the capturing and stitching together of hundreds of thousands of images, and thousands of laser scans of the space.

The BIM is essentially a digital 3D model of the building, and includes information about nearly every inch of the sprawling landmark, from which portrait hung on which wall, to what the electrical and duct work behind it is like.

Stitching together the BIM has been central to the project’s core challenge: preserving the heritage aspects of Centre Block while making the needed updates.

“It is very detailed in terms of its design and its heritage elements… and it hasn't been modernized for a very long time,” Garrett said of the iconic building. “It's a very intricate design challenge to figure out in a heritage structure, how to run those kinds of things through the building. And the BIM really helps us do that and assess different scenarios of doing that as we evolve the design.”

The BIM can be viewed digitally on the project team’s computers, or thanks to video game software, through a virtual reality simulation.

“One way to describe it would be like digital Lego blocks where each block is attached to a database of information. What it allows us to do is to represent the physical characteristics of the building with also including all of the important information about each of the components. So it's a very smart tool,” said Spencer Cripps, a project manager with CENTRUS, the architectural and engineering consulting firm taking on the Centre Block project.

So, if say the electrician needs to get a closer look inside a wall to plan the wiring, they could head into a special room, put on a pair of virtual reality goggles and navigate through the space as if they were inside without having to tear into a wall to get a peek.

“By modeling, we're giving ourselves the opportunity to build it digitally first and to anticipate any issues before we get to site, before we actually start the actual construction projects,” Cripps said.

The BIM was initially developed in partnership with CENTRUS and Carleton University’s immersive media studio. The first step was capturing all the information about the building and that began years before Centre Block closed.

Not only does the BIM mean that there will be a historic and lifelike record of what the building looked like pre-renovation, it’s being updated throughout the course of the project so that various stakeholders can use it to do things like visualize and plan where new light fixtures may be in relation to historic pieces of art that adorns the walls.

According to PSPC, the “cost to support” the BIM technology is approximately $180,000, but is promised to help save money and time in the long-term by allowing the project team to make data-informed decisions.

As part of the renovation process, the ground around the Hill has been dug up for a few reasons, including establishing the construction site, and excavating for the new Visitor Welcome Centre.

As CTV News reported this summer, a missing piece of Canadian history was uncovered by archeologists working on the pre-construction assessment of Parliament Hill. They discovered a former military guardhouse and several artifacts that pre-date Confederation.

According to PSPC approximately 90,000 artifacts, such as buttons from military uniforms and pieces of ceramics, have been unearthed to date.

There have also been discoveries inside the building.

As part of the renovation assessment process, items have been discovered inside the walls and ceilings of Centre Block, including old copies of order papers from the House of Commons, and items dating back to the 1920s such as cigarette boxes, matchboxes, chewing gum packages and candy bar wrappers.

All of these finds are being catalogued, analyzed and preserved as if in a museum, as they are all considered to have heritage value. The plan for displaying these finds is still being worked out, but talks are ongoing between PSPC, Parks Canada, the National Capital Commission, the Department of National Defence, the House of Commons, Senate, Library of Parliament, and Canada’s museum community.

MPs and senators moved out of Centre Block at the end of 2018, and into their new homes of West Block and the Government Conference Centre, respectively. There, temporary House of Commons and Senate chambers were constructed, where the legislative work of the federal government will be conducted for the next decade or so, as Centre Block gets a makeover.

The major construction and modernization project is the first full renovation since the building was completed in 1927.

The total cost of what could be a more than 10-year renovation project has yet to be determined, but the price tag is expected to be in the billions. Approximately $3 billion was spent preparing for Centre Block’s closure, including the renovations to create the temporary House and Senate.