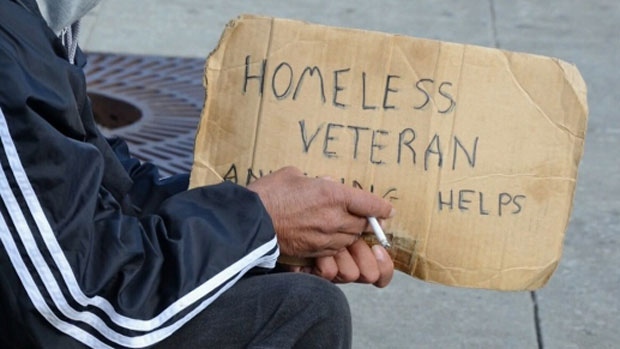 The number of homeless veterans that Veterans Affairs Canada is aware of has grown every year since 2015.

With Remembrance Day around the corner, documents tabled in the House of Commons this week offer a sense of the scope of homelessness among Canadian veterans, and according to one veterans group, the numbers show what they’ve been seeing on the ground: that the problem is on the rise.

"We do see that the problem is kind of on the rise," Debbie Lowther told CTV News. Lowther is chair and co-founder of Veterans Emergency Transition Services Canada (VETS Canada), a volunteer organization focused on identifying and assisting homeless veterans. She said over the last few months the numbers have been steadily increasing.

The provinces with the highest numbers of homeless veterans are Ontario, where as of Sept. 1, 2017, there were 285; British Columbia with 147; and 134 in Alberta. There are also 64 homeless veterans whose location is unknown.

In the documents, Veterans Affairs Canada acknowledges that the department is only able to count veterans who self-identify as homeless and have been registered to receive services from the department.

Lowther said 770 homeless veterans Canada-wide is likely a little lower than the reality on the streets. VETS Canada is contracted by the government to reach out to homeless veterans and connect them with the department to receive services. Last month VETS Canada assisted more than 200 veterans who were homeless or heading towards being homeless.

"There’s been a lot of delays lately in receiving services from veterans affairs," she said.

In the documents, Employment and Social Development Canada says the data compiled from 15 communities across the country show that veterans made up 2.1 per cent of shelter users in the first half of 2017.

Past federal research has shown that in Canada, homeless veterans are typically older than the average population of homeless people in Canada, and were more likely to be male. It also found that mental health issues like post-traumatic stress disorder and substance abuse issues increase a veterans’ risk of becoming homeless.

The minister says the increase in homeless veterans on their radar is correlated to efforts to find and connect homeless veterans with federal services. O’Regan cited their partnership with VETS Canada as a central part of that.

"The first priority is to find homeless veterans where they are, inform them of the help that is available to them, assist them in seeking and getting that help, and help them get off the streets and find suitable housing," said O’Regan.

The 2017 budget included $4 million over 4 years for an emergency fund for veterans, to cover urgent needs like shelter and food. It won’t be in place until April 1, 2018. The Liberals have also established a new secretariat within Veterans Affairs Canada that is focused on transition to civilian life, family support, and homelessness.

The government was expected to release strategy to tackle homelessness among veterans, this fall. While that’s not being ruled out, Minister of Families, Children and Social Development Jean-Yves Duclos' office confirmed that the coming broader national housing strategy will include new supports for veterans.

It’s expected that plan will be unveiled in the coming weeks.

"Our government is taking concrete and significant steps to provide more stable housing to all who find themselves homeless, and increase the support for vulnerable groups, especially Veterans," O’Regan said.

The data was released by the government in response to an order paper question—a formal request for information that the government must respond to—from Conservative MP Steven Blaney.

He said O’Regan should be doing more to help with transition and address what the numbers show to be a growing number of homeless veterans seeking help.