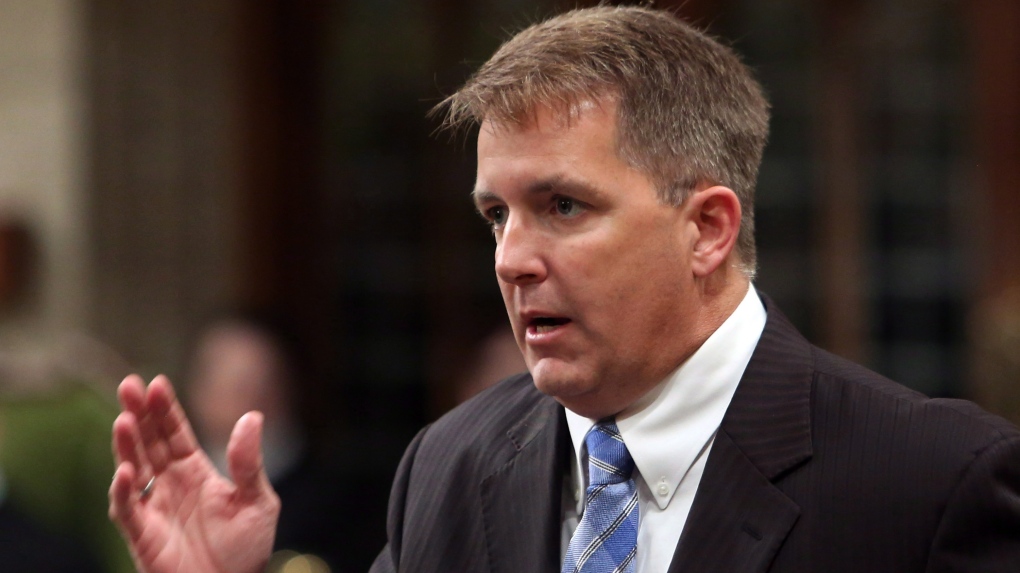 Scott Armstrong stands in the House of Commons during question period on Parliament Hill in Ottawa, Friday May 16, 2014. (THE CANADIAN PRESS / Fred Chartrand)

OTTAWA -- Among those vying for seats in the federal election this fall are dozens of candidates who have already held the job.

There are 29 former MPs among the currently nominated candidates for the major parties. Most are members who were defeated in 2015 and are looking to regain their former seats in a new political environment.

Two-thirds of the House alumni running again are Conservatives. Among the varied group are multi-term veterans and former ministers like Leona Aglukkaq from Nunavut and Kerry-Lynne Findlay of Vancouver, as well as one-termers like John Williamson in New Brunswick and Lois Brown from Newmarket-Aurora.

With polls suggesting a tight race for power between the governing Liberals and Opposition Conservatives, former Tory MPs see the chance to retake lost ground.

Some barely left politics at all, like Tory Scott Armstrong, who lost his Nova Scotia riding in 2015 to Bill Casey, a former longtime MP who came out of retirement himself that year to reclaim the seat for the Liberals.

Armstrong sees promise in Casey's impending retirement and a stronger environment for Conservatives in Atlantic Canada, where the Tories were shut out in 2015 by a Liberal sweep.

The main political change this go-around is getting used once more to the responsibility of being the candidate, and the changed dynamic of running for an opposition party.

"You don't have to defend your record as much at the door," Armstrong says. "It's more about what you're going to do when you get to Ottawa."

But the biggest changes have been more personal.

"Suddenly, I'm a grandfather," Armstrong says. His now-grown children have been helping knock doors and make phone calls, a far cry from his first run in 2009 or even from the 2015 campaign.

A handful of other former MPs among the other parties are making their returns to candidacy. There are no former Liberal MPs so far, but New Democrats Jack Harris, Andrew Cash and Malcolm Allen are back on the hustings, as well as a handful of former Bloc Quebecois MPs.

Then there are a few MPs who are running again, but for different parties.

Jean Rousseau, a former NDP MP from southeast Quebec, will be carrying the Green banner into the upcoming campaign.

The largest contingent of ex-MPs running under new colours are three erstwhile Tories who have foregone the blue in favour of People's Party purple.

Steven Fletcher, a former Manitoba MP and Progressive Conservative provincial representative, says "the plan was to always run federally again," though he did not initially intend to do so for the People's Party.

Fletcher clashed publicly with his own government in Manitoba and was eventually expelled from the Tory caucus over his opposition to Premier Brian Pallister's plan to implement a carbon tax.

Fletcher says when it became clear he would not be welcome as the federal Conservative nominee, he thought he would run as an Independent, but then he was approached by People's Party leader Maxime Bernier. Both were ministers in Stephen Harper's Conservative cabinet; both are on the outs with the Tories.

Fletcher says many in his riding are unhappy with the federal Conservatives, the provincial government and the other traditional parties.

And he hopes Bernier's crusade against corporate welfare will resonate with those in Manitoba who remember the controversy around where to build Canada's now-aging CF-18 fighter jets.

Fletcher did concede "frustration" that money he had helped to raise for the federal Conservatives while he was part of the riding association will now be used against him this fall.

The two other former Conservative MPs now running for the People's Party are Gurmant Grewal, who held a Vancouver-area riding, and Corneliu Chisu of Pickering-Scarborough East.

Chisu says the People's Party is "growing up" as a party, and he is getting good responses from people who remember him from his days as MP between 2011 and 2015. He says he hasn't changed his behaviour over the years, including since switching parties.

"Once you're in the public life," Chisu said, "you're always in public life."