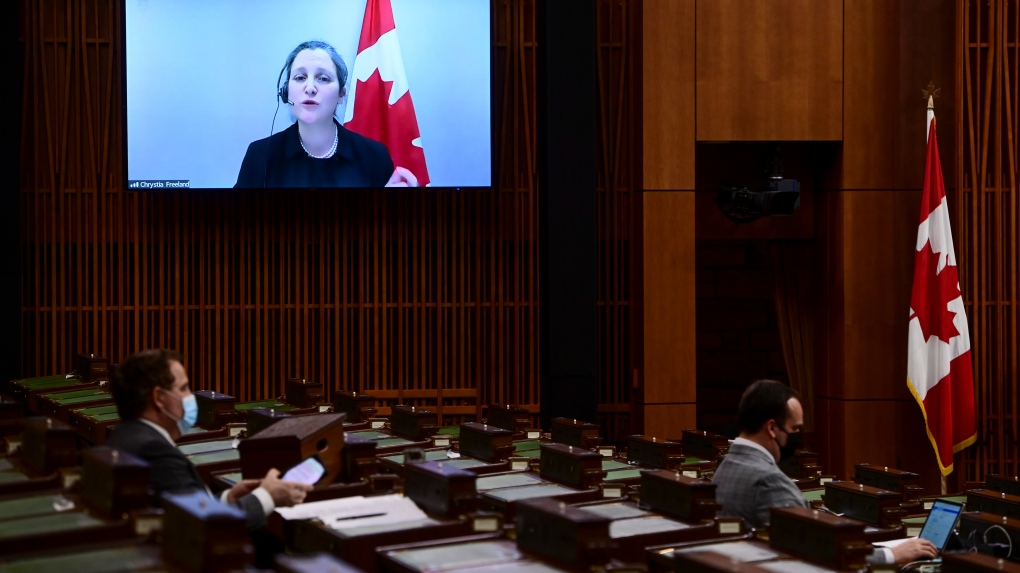 Minister of Finance Chrystia Freeland rises via video-link during question period in the House of Commons on Parliament Hill in Ottawa on Tuesday, Jan. 26, 2021. THE CANADIAN PRESS/Sean Kilpatrick

OTTAWA -- The upcoming 2021 federal budget is going to be critical to setting in motion Canada’s post-pandemic recovery efforts and it’s time the government act on a series of promises the government has made, say MPs.

The House of Commons Finance Committee tabled a pre-budget consultation report on Tuesday, and it focuses on suggestions for how to keep up pandemic aid as well as supporting rebuilding the economy and key sectors, post COVID-19. It also calls on the government to make good on a series of commitments, such as national child care and pharmacare programs, while not setting the country on an unsustainable spending path.

“When the economy enters the recovery phase, fiscal policy will have to balance the short-term goal of stimulating the economy back to its full capacity with the long-term goal of keeping federal finances on a sustainable path,” reads the committee report.

The committee is recommending that in the 2021 budget the federal government takes action on child care by increasing funding, establishing national standards, or creating a nationalized system; put new money towards improving care in long-term care homes and other congregate living settings; and to move forward on enacting a national universal pharmacare program.

MPs are also calling on the government to keep up various COVID-19 support programs, such as the Canada Emergency Wage Subsidy, and to “consider the implementation of a universal basic income program.”

“The COVID-19 pandemic has changed the way Canadians socialize, entertain, work, study and shop. Canadians have been challenged economically, socially, physically and mentally. However, Canadians have shown solidarity in making the individual and collective sacrifices needed to guarantee the health and safety of all Canadians, especially the most vulnerable. Federal programs and services will have to effectively support Canadians as they emerge from these challenging times,” reads the report.

The report also pushes for more spending on research and innovation to help Canadian companies grow and compete globally, and it wants to see $2 billion earmarked for global vaccine research and production in the budget.

In addition to these, among the total of 145 recommendations are calls to:

This report is one of the documents that Deputy Prime Minister and Finance Minister Chrystia Freeland and the other federal officials who are in charge of crafting the federal budget will be able to consult to inform their drafting.

The government has yet to declare a date for the 2021 federal budget to be tabled, after cancelling the 2020 version due to the then-newly emerging COVID-19 threat and related lockdowns.

In the months following, the federal Liberals cited ongoing economic uncertainty as the reason why a formal federal budget wasn’t brought forward, opting for a fall economic update instead.

In that update in late November 2020, Freeland announced a new round of financial supports to respond to the pandemic and unveiled a new economic stimulus plan the government intends to roll out over the next three years to boost Canada’s recovery, with more details promised in the 2021 budget.

One of the biggest measures foreshadowed as part of this long-term growth plan is the creation of a Canada-wide “Early Learning and Child Care System.”

Billed as one of several endeavours meant to respond to the “she-cession”—the economic effects women are disproportionately experiencing during the pandemic—the government announced the intent to move forward with this child-care plan in the 2021 budget.

One Liberal promise not expected to be fulfilled with the coming budget will be balancing the books.

The fall economic update projected a $381.6 billion deficit this fiscal year, which was considered Canada’s best-case scenario, and is up from the $343.2 billion forecast in July. However, it was cautioned that should the pandemic situation continue to worsen and the country experience extended restrictions, the deficit could hit $388.8 billion in 2020-21, or balloon to $398.7 billion if restrictions are escalated, which has since happened in some regions.

In order to complete the pre-budget consultation process, MPs on the committee held a series of mostly virtual meetings over the first two weeks of December in which they heard from 52 witnesses, in addition to 792 written submissions issued to the committee from stakeholders, interest groups, officials and individuals.

The recommendations are also based on input from discussions the committee had dating back to spring 2020, in relation to the government’s response to COVID-19 more broadly.

“It was a somewhat difficult trail to get to the conclusion of this report. COVID happened, scheduling changed and Zoom capacity in Parliament made it very difficult to find enough time,” said Liberal MP and committee chair Wayne Easter when he tabled the report in the House on Tuesday.

Because there did not end up being a 2020 federal budget, the committee re-submitted its 2020 pre-budget recommendations for the government to reconsider as well, which also included the push for a national pharmacare program.

While the report was issued by the committee, each of the three main opposition parties published additional opinions. In the case of the Conservatives and the Bloc Quebecois, “dissenting” reports were published, while the NDP offered “supplementary opinion.”

The Conservatives’ additional recommendations included a series on “spending within our means” and lobbied for a commitment to “create no new taxes.” The caucus also issued alternate recommendations around the natural resource sector and the provincial equalization formula.

“Canada’s current public-private debt ratio of 387 per cent of GDP is the highest on record, twice the historic average… Only low interest rates have allowed Canada to forestall a major debt crisis. Unless the debt ratio drops before rates rise to normal levels, said crisis is inevitable,” write the Conservatives in their dissenting submission. “Only paycheques will reduce our debts, put food on the table, roof over head and tax-dollars into schools, hospitals, and roads. Only paycheques secure our future against a debt crisis and rescue our people from poverty and bankruptcy.”

The Bloc Quebecois’ dissenting report took the position that it’s proposals aimed at meeting Quebeckers’ needs have been missed, listing more than three dozen province-specific policies. The party also pushed for some non-budgetary changes, such as decentralizing the power cabinet has and easing off of the use of omnibus bills to rapidly pass massive COVID-19-related policy.

The Bloc caucus also criticized the amount of time that will have passed by the time the budget is presented, and when the 2019 federal budget was introduced.

While the New Democrats didn’t offer a dissenting opinion, NDP MPs submitted additional commentary on why certain recommendations need to be followed through on urgently. Broadly speaking the NDP are pushing the government to “implement a new direction for the next fiscal year.”

“In particular, it should incorporate stronger tax elements to more actively address growing inequality, to help Canadians over the long term and to support economic sectors as they navigate through and recover from the COVID-19 crisis,” reads their supplementary report.