1 in 4 Canadians say SNC-Lavalin affair will influence their vote: Nanos

One in four Canadians say the SNC-Lavalin scandal will influence their vote in the next federal election – and the political fallout appears to be growing, according to a new Nanos survey.

Before Jody Wilson-Raybould’s scathing public testimony on Wednesday alleging high-level government pressure and “veiled threats” in the case, 17 per cent of Canadians said the SNC-Lavalin scandal will be a factor when they vote in the 2019 election.

But two days after the explosive hearing, the number of concerned respondents jumped by nearly 10 per cent, to 26 per cent.

The sharpest spikes in polling were seen in the Prairies, where 27 per cent of respondents cited SNC-Lavalin as a voting concern – nearly double Monday’s margin of 14 per cent.

Few respondents from Wilson-Raybould’s home province of British Columbia appeared to change their minds following her testimony. By Friday, 25 per cent of respondents in B.C. said the issue could influence their votes, up just three per cent from Monday.

Eight per cent said they’re unsure if the scandal will influence their votes.

Even so, the economy remains a much stronger vote-deciding factor. Sixty-seven per cent of those surveyed said the economy will influence how they vote this year, dipping slightly from 73 per cent earlier in the week. WHICH LEADER IS THE MOST ETHICAL?

Trudeau’s personal brand has taken a hit since Wilson-Raybould’s testimony, according to the survey.

Before the former attorney general testified, 14 per cent of respondents said they considered Trudeau the most ethical federal leader. At the time, Trudeau ranked third behind Green Party Leader Elizabeth May, at 23 per cent, and Conservative Party Leader Andrew Scheer, at 21 per cent.

But by Friday, Trudeau had sunk to 10 per cent support, putting him in the fourth spot behind NDP Leader Jagmeet Singh, who held 11 per cent.

May appeared to pick up most of Trudeau’s eroded support, gaining 5 percentage points to put her at 28 per cent by Friday. 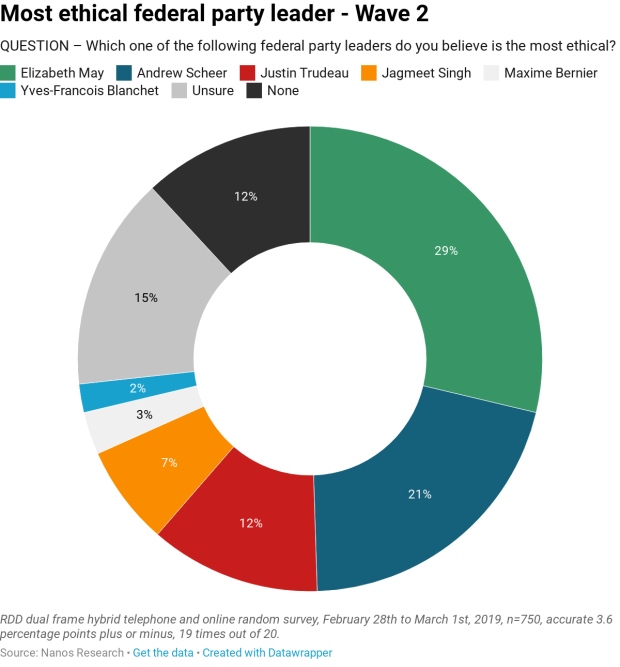 WOULD LIBERALS OR CONSERVATIVES BE MORE ETHICAL?

Andrew Scheer’s Conservatives earned the same amount of confidence, at 34 per cent. That number has not changed since Wilson-Raybould’s testimony.

Nearly a third of respondents, at 32 per cent, said they were unsure which party would be the most ethical in government.

WHICH PARTY IS THE MOST ETHICAL?

For the moment, Elizabeth May’s Green Party, of which she is the lone MP, is considered Canada’s most ethical party, according to the survey. More than a quarter of all Canadians, at 28 per cent, say the party is the most ethical.

After the Greens, the Conservatives are considered the most ethical, at 21 per cent, followed by the NDP, at 11 per cent, and the Liberals at 10 per cent, down from 14 per cent on Monday.

Three per cent of respondents considered Maxime Bernier’s People’s Party of Canada the most ethical, followed closely by the Bloc Quebecois, at two per cent.

Another 14 per cent of those surveyed said none are ethical. Eleven per cent are unsure.

Readers should note that the sample for the second wave of research was drawn from the same 1,000 participants of the first wave to allow for a direct comparability on the impact of the testimony.