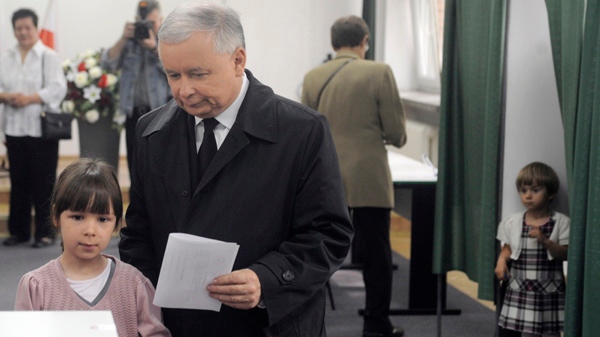 Jaroslaw Kaczynski, the Polish politician who lost his presidential brother in a plane crash two months ago, is trailing interim president Bronislaw Komorowski after the first round of the country's elections.

Komorowski did not clinch the 50 per cent required for a clean victory, meaning a run-off vote without eight other presidential candidates will be held on July 4.

The election follows the death of former president Lech Kaczynski, who was killed in a horrific plane crash in Russia last April.

While observers first believed Kaczynski's likely successor would be his twin brother Jaroslaw, himself a former prime minister, polls leading up to the election showed him trailing Komorowski, who is the parliamentary speaker.

Speaking to supporters late Sunday, Komorowski said that he was "happy and fulfilled" knowing that millions of Poles had voted for him.

"In life as in football, overtime is the most difficult. Let's not forget that and let's mobilize all our forces for the grand finale on July 4," he said.

Komorowski, a pro-EU, moderate member of the Civic Platform party, has made it clear his priorities include ending the nation's unpopular military mission in Afghanistan, adopting the euro within five years and bringing in pro-market reforms.

Kaczynski is a social conservative who has vowed to fight crime and corruption, forgo market reforms in favour of strengthening government programs and promote traditional Roman Catholic values in daily life. He has refused to set a timetable for adoption of the euro.

Early Sunday, voters praised the merits of Komorowski over Kaczynski, who is known for his staunch nationalism but also for an antagonistic nature.

"(Komorowski) is the best among the candidates: he has rich experience, moderate views and a sense of humour, which the predecessor was lacking, or at least so it seemed," said lawyer Jan Rostafinski, 62. "Komorowski will represent Poland well."

But others said they picked Kaczynski for his strong religious values, as well as because they believed he would order a thorough investigation into the crash that Poles now refer to as the "Smolensk tragedy."

Lech Kaczynski and his wife, along with 94 others, were killed on April 10 when their plane crashed while attempting to land in heavy fog in Smolensk, Russia. Many on the plane were high-ranking Polish officials, which was a devastating blow to the ranks of the country's military and civilian elite.

The 26,000 polling stations across the country closed at 8 p.m. local time Sunday, with official results expected later in the evening.