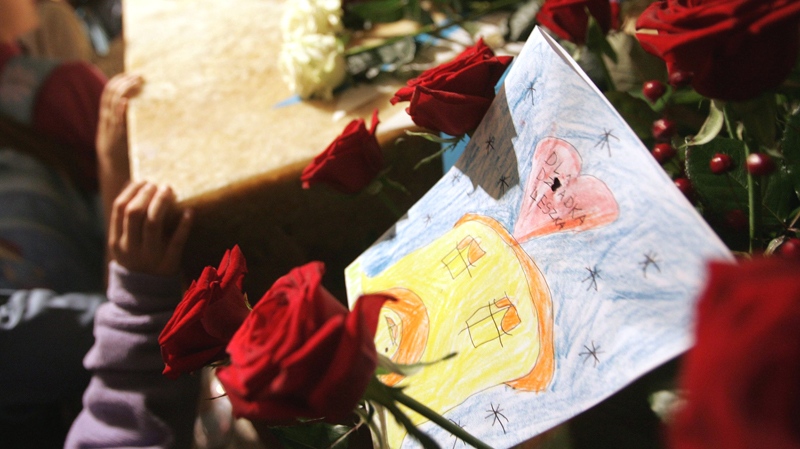 People look at photos of the presidential plane wreckage in front of the Presidential Palace, in Warsaw, Poland, Friday, June 18, 2010. (AP / Alik Keplicz)

WARSAW, Poland - Jaroslaw Kaczynski, a leading candidate in Poland's presidential election, interrupted the last day of campaigning Friday to visit the grave of his identical twin -- the leader whose death in a plane crash forced the early vote.

The visit came on his and his brother Lech's 61st birthday, and two days before Poles vote for a new president, on Sunday.

Kaczynski, dressed in black and carrying red and white roses, descended into the crypt of Krakow's Wawel Cathedral, where he placed the flowers at the honey-hued sarcophagus holding his brother and his sister-in-law, Maria. The candidate was joined by Marta, his niece and the first couple's daughter.

Marta, 30, carried a note with a red heart drawn by one of her young daughters. "For Grandpa Leszek," it said, using the late president's nickname.

The president and first lady were among 96 people killed in a plane crash in western Russia on April 10. The delegation, which included many high-ranking civilian and military leaders, was en route to a memorial service for Polish prisoners of war killed by Soviet forces 70 years ago.

Kaczynski's visit to his brother's grave was private and not linked to the campaign, said Elzbieta Jakubiak, a lawmaker with Kaczynski's Law and Justice party and one of his top political allies.

"It's a family commemoration," Jakubiak was quoted as saying by the news agency PAP. "We have no influence over the fact that June 18 falls during the campaign and that it's his first birthday without his brother."

The day before, the other main presidential candidate, Bronislaw Komorowski, also paid his respects at the tomb.

Soon after his brother's death, Jaroslaw Kaczynski decided to run in his place, saying he wanted to fulfill their shared mission of fighting crime and corruption, harnessing a strong state to protect the poor and other vulnerable Poles, and upholding Roman Catholic values.

The latest opinion polls show that Kaczynski faces an uphill battle to defeat Komorowski, the pro-business and pro-European parliament speaker and acting president. There are eight other candidates, but none has significant support.

Kaczynski is generally seen as the more charismatic candidate and the more expert politician, but many Poles carry bad memories of the chaotic government he led from 2006-2007, and of his zealousness in trying to punish former communist collaborators.

"At that time, I thought I wasn't exactly in a normal country. People looked at each other as if they were enemies," said Agnieszka Maczewska, a 49-year-old Komorowski supporter at a recent rally. She said believes Komorowski is a "normal and stable" politician who will be willing to cooperate with the left and right.

Komorowski has committed a number of minor gaffes during the campaign, but his supporters value his moderate stance and his pledge to cooperate with the pro-market government of Prime Minister Donald Tusk.

In one case, he said he wanted Poland to pull out of NATO, when he meant Afghanistan. He made a joke about people from Krakow and Poznan being cheap -- an old stereotype, but not a very diplomatic quip amid a campaign. Recently he also stood before cameras to make an announcement about the National Security Council -- and was seen with a printout of Wikipedia pages describing the council.

A PBS DGA poll published by the Gazeta Wyborcza daily on Friday predicted that Kaczynski will win 33 per cent of the vote Sunday, with Komorowski taking 51 per cent -- enough for an outright victory.

However, according to a GfK Polonia poll for the Rzeczpospolita daily, Kaczynski will win 31 per cent of the vote and Komorowski 42 per cent.

If no candidate reaches 50 per cent, the two top contenders will compete in a runoff on July 4.

Friday was the last day of campaigning, with a period of so-called "election quiet" imposed from midnight to 8 p.m. (1800 GMT) Sunday, when voting stations close and the first exit polls are expected.

Both Komorowski and Kaczynski were ending their campaigns Friday in Gdansk, the cradle of the anti-communist Solidarity movement, which played a vital role in defeating communism. Both men were activists in Solidarity, led by Lech Walesa.