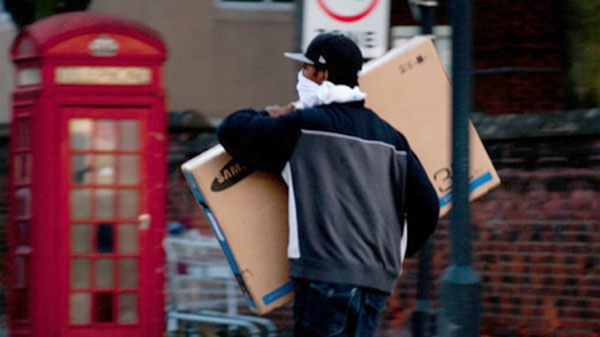 A British looter is seen walking away with a flat screen TV in this image taken from the blog 'Catch a Looter'.

Angry Britons have taken it upon themselves to post pictures of suspected rioters online, so that members of the public can take a closer look and hopefully identify the perpetrators.

As of Tuesday, impromptu blogs and websites such as "Catch A Looter," have been set up, with photos of rioters who have been seen destroying property, breaking into stores, and running away with stolen goods in London over the past several nights.

Many of the people in the pictures are young. Some are wearing masks, others have sweatshirt hoods pulled over their heads. Flat-screen TVs, jeans, shirts and bottles of wine are some of the items they are carrying away from scenes where windows have been smashed in different parts of London.

At "Catch A Looter," visitors are urged to contact police if they recognize the people seen in the images.

The site wisely adds a disclaimer that it is meant as a tool for advancing the riot investigation and not for encouraging the public to mete out their own form of justice to suspects seen in the pictures.

"This site does not support vigilante action; merely using social media to collate all images in one place," the disclaimer posted on the site says.

Still, putting up photos of suspected hoodlums did not sit well with all of the critics engaged in the online world.

"This is a bit creepy, honestly, get out in the streets and stop people with your voice and your presence," wrote one commenter, complaining to the unidentified architect of the "Catch A Looter" site.

Another website called "Identify the London Rioters" has been set up to allow users to look at a single photo at a time, clicking a button to signify whether or not they know the person in the image.

Newspapers like the Daily Mail, the Sun and the Telegraph ran a combination of reader-submitted photos, shots from their staff photographers and many of the images that the police were releasing themselves, some of which appeared on "Catch A Looter" as well.

Police promise that they will continue to publish the photos that they obtain, as long as suspects go unidentified. So far, more than 500 suspects have been arrested in connection with the London riots alone.

"Those who have or intend to go out and commit violent, criminal acts should be warned," Commander Simon Foy said in a statement released Tuesday, as police announced their intention to publish photos in their possession.

"We will have photographs and evidence that we will use to identify you and bring you to justice."

In Canada, this strategy was used when British Columbians posted pictures of the people who rampaged in downtown Vancouver after the Stanley Cup finals.

And Toronto police used similar means to suss out the identities of the people who smashed windows and looted stores during the G20 summit in June of last year.

Social media and the Web help rioters, too

In the riots that have occurred so far in Britain, police have hinted that social media may also have been used to ignite the mayhem on the streets.

Reports from the riots on Monday night suggested that some participants used BlackBerry Messenger (BBM) to co-ordinate their activities as they roamed the streets. In some cases, it appears the police saw the warnings emerging.

The West Midlands police said on Twitter yesterday that they were "aware of unsubstantiated messages on Twitter, Facebook and BBM about disorder at 6 pm in Birmingham this evening." The police later posted a pair messages about "disorder" in the city, which lies about two hours northwest of London.

The Guardian newspaper reported similar BBM messages being sent to rioters, encouraging them to go looting in east London on Monday night.

The Ontario-based Research In Motion, the maker of the BlackBerry, later said it would assist police in any way that it could.

That subsequently drew a threat from a hacking group that posted a message on a BlackBerry blog on Tuesday, which said the company would "regret" helping police in their investigation. The Telegraph reported that the so-called Team Poison hackers threatened to release the personal information of RIM employees to the rioters.