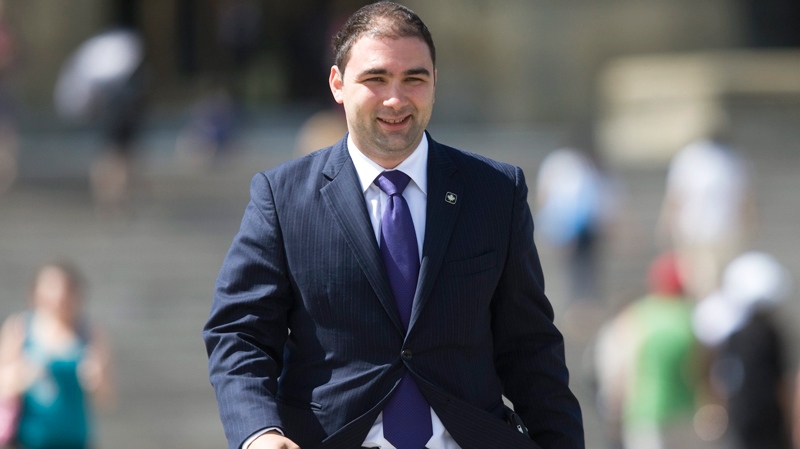 Prime Minister Stephen Harper is looking for his sixth communications director in six years after Dimitri Soudas announced Wednesday he will step down from the job in September.

Soudas told the Conservative caucus that his last day will be Sept. 5. The 31-year-old has worked for Harper since September 2002, and assumed the role as his director of communications in April 2010.

He has also been a trusted adviser to the prime minister on Quebec issues.

In his speech to the caucus Wednesday, Soudas pointed to the rigorous demands of the job, including an intense schedule that leaves little time for family, or even sleep, as his primary reason for leaving his post.

"If there is a list of burnout jobs in politics, director of communications to the prime minister of Canada is probably near the top, especially when it comes after a gruelling leadership race and four election campaigns in seven years," he said.

"Family, friends and life in general take a back seat."

Soudas has a young family that includes three small children: Georgia, Theodore and Katherine. In his speech, Soudas said he was looking forward to taking Georgia to her first day of school on Sept.6, "another first I would have surely missed, as in the past."

Upon taking the job as communications director, Soudas quickly established a reputation as a partisan and a staunch defender of both his boss and the Conservative party.

While much of the work of a prime minister's director of communications is done behind the scenes, Soudas had a very public profile, often appearing on political talk shows to explain and defend the government's policies.

Soudas was also one of the government's most prolific Twitter users, and Wednesday was no exception. He announced the news to his followers by tweeting: "It all started on Sep 5 2002 and on Sep 5 2011 – 9 years later – I'll start a new chapter of my life. Priority 1 my wife and 3 kids."

Not long after his announcement, Soudas became a trending topic on Twitter in Canada.

On Wednesday, Soudas denied that he or the Prime Minister's Office has an antagonistic relationship with the media.

During the spring election, Harper had to defend his aide against accusations that he tried to influence the Port of Montreal's choice for its new chairman in 2007.

Despite denying that he tried to intervene in the selection process, media reports said Soudas had met with the port's three board members to ask them to select the government's choice for the president's post, Robert Abdallah.

Both Soudas and Harper denied any wrongdoing in telling board members who the government's preferred candidate was. The job went to Patrice Pelletier.

"It's always preferable not to be the news story," Soudas told Power Play when asked about the fact he has been caught in the middle of some government controversies. "But whenever the news story arises, you must always ensure that the facts are clearly articulated. And that is what we've done every single time."

In a move that indicates the close ties between Soudas and Harper, the prime minister took time during his recent tip to Greece to visit the site of a Nazi massacre during the Second World War in which Soudas's grandfather died.

In an email to The Canadian Press, PMO spokesperson Sara MacIntyre said those who have worked with Soudas "remain in awe of his dedication, loyalty and tenacity."

MacIntyre also praised Soudas for serving "the prime minister with immense passion, loyalty and commitment, not to mention sacrifice."

On Wednesday, Soudas called it "an immense privilege" to serve Harper through his time in opposition, the turbulence of minority governments and during the most recent election that saw the Tories win their much-coveted majority mandate.

Soudas called his time on Parliament Hill "the experience of a lifetime," and thanked his wife for sacrificing time together so he could "serve a man who is a great role model to me, a strong leader but above all the most genuine, kind and giving person I have ever met."

Soudas said he and his family will be moving to Toronto, where he plans "to do something in the private sector."