Pickton's answer to media block? Pose as a lawyer 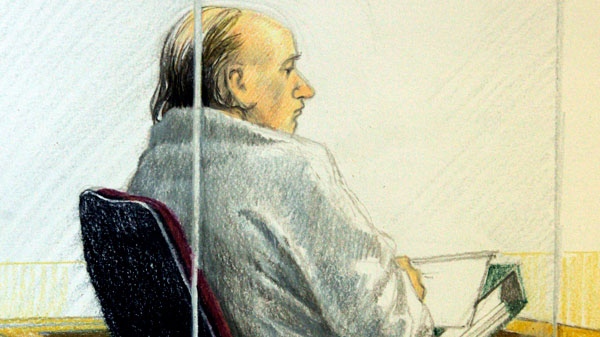 VANCOUVER - From inside the walls of a maximum-security prison in British Columbia's Fraser Valley, serial killer Robert Pickton offers a suggestion to a reporter interested in visiting him for an interview.

"If you are looking for a story, 'boy do I have one for you!!!"' Pickton writes in a letter to The Canadian Press.

"Tell them (prison staff) when making appointment by telephone that you are my new defence lawyer being appointed to this case, in defending Mr. Pickton's rights."

The bizarre ruse is Pickton's solution to what he describes as a "certain stumbling block" -- an apparent restriction that has kept the killer away from reporters since his arrival at Kent Institution, east of Vancouver. He was transferred to Kent after his final appeal for the second-degree murders of six women failed in 2010.

In the one-page letter, written by hand in tidy block letters, Pickton says he's willing to sit down for an interview, but he suggests the only way to see him is by becoming an impostor.

If the scheme works, prepare for a long session, Pickton warns, and best to bring along an actual lawyer for good measure.

"To get an upper hand on this particular case, plan for a four-hour interview to exchange information, as we have much to talk about to fully understand this case," writes Pickton, who has carefully underlined what appear to be his most important points.

"Also, bring another lawyer with you as a junior lawyer to help you with the workload. You need one."

The Canadian Press wrote to Pickton requesting an interview, and the letter was his reply.

Pickton, who is believed to have killed dozens of sex workers from Vancouver's Downtown Eastside, never actually outlines just what he's prepared to say, and he may have little opportunity to ever say it.

While inmates in the federal prison system are permitted to arrange interviews with journalists, Correctional Service of Canada guidelines allow prison staff to restrict that access in certain cases.

Pickton appears to be one of those cases.

"At this point, what I can tell you is that the case-management team has made the decision that it's not in his correctional plan to give interviews," said Jean-Paul Lorieau of the Correctional Service of Canada.

"So far, everyone who's asked has been given the same answer."

Lorieau said several journalists have made similar requests since Pickton arrived at Kent, and all have been rejected.

Another corrections spokesman, David Harty, later clarified that there is no blanket ban on Pickton speaking with journalists and that each request is considered in light of his correctional plan. However, Harty couldn't expand on exactly what Pickton's plan says about interviews with the media.

Harty said Correctional Service policies state that mail is typically not read by prison staff except in rare circumstances. He couldn't say whether mail to or from Pickton is ever vetted.

A written response from the prison's warden, Mark Kemball, doesn't outline why Pickton is being kept away from reporters, but Kemball notes an inmate's correctional plan "establishes goals for the individual inmate, addresses the dynamic factors that contributed to his criminal behaviour and employs the most effective intervention techniques for that inmate."

Pickton was arrested in 2002, when RCMP officers executing a search warrant for illegal firearms on his farm in Port Coquitlam, B.C., stumbled upon the remains and belongings of missing sex workers from Vancouver's Downtown Eastside.

He has been in custody ever since, sitting through a trial that convicted him of six counts of second-degree murder in 2007 and several appeals that ended in 2010. He was sentenced to life in prison with no parole for at least 25 years.

Pickton was able to give one media interview before was transferred to Kent.

In August 2010, days after the Supreme Court of Canada denied his appeal and before he was transferred into the federal system, Pickton spoke to a CTV reporter from a provincial jail.

In that interview, Pickton claimed he was a scapegoat and that others were responsible for the murders, though he didn't know who. He cryptically suggested there was more to the story, but then, as now, he didn't fill in the blanks.

The only time since the CTV interview that the public has heard anything from Pickton was during the ongoing public inquiry examining why police failed to catch him.

A senior officer from Ontario's Peel Regional Police visited Pickton at Kent as she prepared a report for the inquiry. Deputy Chief Jennifer Evans testified that Pickton maintained his innocence, but she didn't reveal anything else about their conversation.

Pickton isn't the first serial killer to be kept from the media.

Clifford Olson, who murdered 11 children and young adults in B.C. in the early 1980s, was infamous for contacting journalists and taunting his victims' families.

Corrections officials responded by cutting off Olson's access to journalists.

Harold Schechter, an expert on serial killers who teaches at the City University of New York, said he hasn't heard of many cases in which serial killers have been prevented from speaking to reporters.

"It's very unusual here in the United States; I'm not aware of any analogous situations," said Schechter, author of several books about multiple murderers, including "The Serial Killer Files."

"Very notorious serial killers -- John Wayne Gacy and (Ted) Bundy and the Son of Sam, David Berkowitz, and all those people -- they seemed to communicate from behind bars all the time with journalists."

Schechter said restrictions on Pickton may be an attempt to avoid fuelling his notoriety.

"I'm going under the assumption that it has something to do with not allowing someone like Pickton to gratify his narcissism, and partly as a way of protecting the families," said Schechter.

"I don't know if this is part of it, but there's so much focus now on serial killer collectors and serial killer groupies, there might be some of that element of it."

Schechter said reporters should have access to serial killers, which he said can help the public and experts such as himself understand their heinous crimes.

Lori-Ann Ellis, whose sister-in-law Cara Ellis's remains were found on Pickton's farm, said she wants to hear what Pickton has to say.

Pickton was charged but never put on trial for the murder of Cara Ellis. That means her family has never heard a detailed account of what happened to her.

The only person who knows, said Lori-Ann Ellis, is Pickton. Even if he isn't prepared to come clean now, Ellis hopes that will change one day -- and if it does, she wants journalists to be able to tell that story.

"We don't want to hear a bunch of babble, but if he eventually gets so bored that he's just screaming to tell his story, who is the prison system to stop us from hearing that?" said Ellis.

"When people are on death row, they have those death row confessions. We don't have the death sentence, but I think he's going to get so bored for some kind of attention, eventually he may give up some information."

Pickton was convicted of killing six women, but the remains or DNA of 33 women were found on his farm.

He once bragged to an undercover police officer that he killed a total of 49.