Pentagon says it has no records of bin Laden death 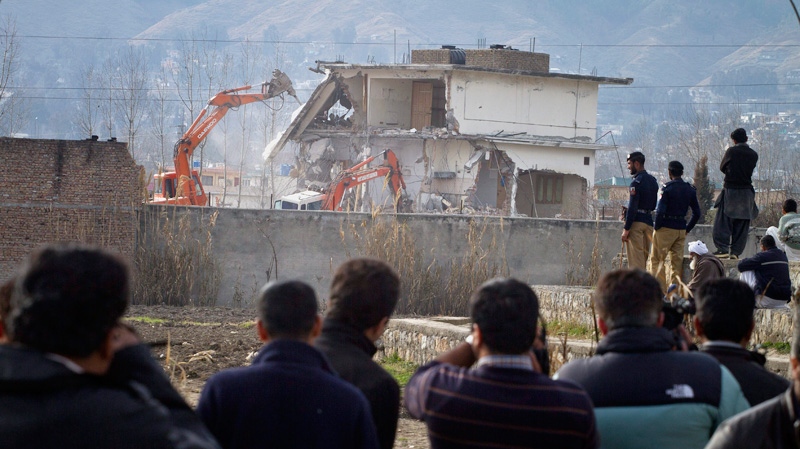 WASHINGTON - The hunt for Osama bin Laden took nearly a decade. It could take even longer to uncover U.S. government emails, planning reports, photographs and more that would shed light on how an elite team of U.S. Navy Seals killed the world's most wanted terrorist.

Ten months after that electrifying covert mission, an administration that has pledged to be the most transparent in American history is refusing to release documents under the Freedom of Information Act, the U.S. openness in government law, that would provide insights into how bin Laden died, how the U.S. verified his identity and how it decided to bury him at sea, as well as photographs taken during and after the May 2011 raid on his compound in Abbottabad, Pakistan.

Government officials have discussed details of the mission openly in speeches, interviews and television appearances, but the administration will not disclose records that would confirm their narrative of that fateful night. The Obama administration has not even disclosed where all the documents might be stored.

Requests for bin Laden materials were among the most significant filed last year under the open records law, which compels the government to turn over copies of federal records for free or at little cost. Anyone who seeks information under the FOIA generally is supposed to get it unless disclosure would harm national security, violate personal privacy or expose business secrets or confidential decision-making. The law has been the focus of extra attention since Sunday, the start of Sunshine Week, when American news organizations promote open government and freedom of information.

Citing the law, The Associated Press asked for files about the raid in more than 20 separate requests, mostly submitted the day after bin Laden's death. The Pentagon told the AP this month it could not locate any photographs or video taken during the raid or showing bin Laden's body. The Pentagon also said it could not find any images of bin Laden's body on the Navy aircraft carrier where the al-Qaida leader's body was taken.

The Pentagon said it could not find any death certificate, autopsy report or results of DNA identification tests for bin Laden, or any pre-raid materials discussing how the government planned to dispose of bin Laden's body if he were killed. The Defence Department said it searched files at the Pentagon, the U.S. Special Operations Command in Tampa, Florida, and the Navy command in San Diego, California, that controls the USS Carl Vinson, the aircraft carrier used in the mission.

The Pentagon told the AP in late February it could not find any emails about the bin Laden mission or his "Geronimo" code name that were sent or received in the year before the raid by William McRaven, the three-star admiral at the Joint Special Operations Command who organized and oversaw the mission. It also could not find any emails from other senior officers who would have been involved in the mission's planning. It found only three such emails written by or sent to then-Defence Secretary Robert Gates and these comprised 12 pages sent to Gates summarizing news reports after the raid.

Under the FOIA, even if a document contains secrets about national security, the government can censor the passages but must release anything else in the document that is "reasonably segregable."

The information blackout means that the only public accounts of the mission come from U.S. officials who have described details of that night. In the hours and days after bin Laden's death, the White House provided conflicting versions of events, falsely saying that bin Laden had been armed and even firing at the SEALs, misidentifying which of bin Laden's sons was killed, and incorrectly saying bin Laden's wife died in the shootout. President Barack Obama's press secretary attributed the errors to the "fog of combat."

Since then, no authoritative or contemporaneous records have been made available. For the administration, the book on bin Laden appears to be closed.

The administration is refusing even to confirm or deny the existence of helicopter maintenance logs and reports about the performance of military gear used in the raid. One of the stealth helicopters used by the SEALs crashed during the mission, and its wreckage was left behind. People who lived near bin Laden's compound took photos of the disabled chopper as it straddled one of the building's high walls. The photos showed a unique tail rotor that aviation experts said was designed to avoid radar detection.

On the AP's request for the helicopter records and equipment reports, the Defence Department invoked what is known as a "Glomar response." The reference dates to the 1970s when the CIA refused to confirm or deny the existence of the Glomar Explorer, a ship the agency used in the attempted salvage of a sunken Soviet submarine.

The AP is appealing the Defence Department's decision. Ten months later, the CIA, which ran the bin Laden raid and has special legal authority to keep information from ever being made public, has not responded to AP's request for records about the mission. The CIA holds photographs of video recordings of bin Laden taken during the operation.

In the days after the raid, select U.S. lawmakers were invited to visit a secure room at CIA headquarters to view images from the raid, including pictures of bin Laden's body. They were not allowed to take copies of the photos back to Capitol Hill. Republican Sen. James Inhofe, a senior member of the Senate Armed Services Committee, has said one photo showed brain matter coming out of bin Laden's eye socket. Inhofe said others were taken as the body was being prepared for burial at sea and were less jarring.

Federal courts consistently have upheld the government use of the Glomar denial, which is different from refusing to disclose materials. The Glomar denials are often national security cases or used to protect an individual's privacy. It is a tough legal claim to beat in court.

The former director of the Justice Department's Office of Information and Privacy, Dan Metcalfe, said the Pentagon overplayed its position. Citing Glomar in AP's case means the fact that the military performs maintenance on helicopters or that it prepares reports about weapons performance is itself classified. The Pentagon's claim is so broad that it "collapses of its own weight," Metcalfe said.

Judicial Watch, a conservative watchdog group, has sued the administration in federal court to force the release of photos and video of bin Laden. The AP has not sued to force the government to turn over the broader range of files it requested.

In the Judicial Watch suit, federal officials acknowledged that the CIA has more than 50 photographs and video recordings of bin Laden's body taken after the raid and during his burial at sea. The director of the CIA's National Clandestine Service, John Bennett, said in a court declaration last year that many of the photographs and video recordings are "quite graphic, as they depict the fatal bullet wound to (bin Laden) and other similarly gruesome images of his corpse."

Judicial Watch has disputed the argument that American personnel and secrets will be at risk if the images are released. It called the concern over violence against Americans "hypothetical speculation" and said it is hard to understand how a photo of bin Laden being buried at sea would expose sensitive equipment or personnel.

The U.S. Special Operations Command, which oversees SEAL Team 6 and other commando units, keeps tight rein on information about their equipment, training and missions. In August 2007, it denied a request by the AP for an internal report on the Battle of Mogadishu, a military operation in Somalia in October 1993 that cost 18 American troops their lives.

The command told AP that the report still was classified, even though the battle, better known as "Black Hawk Down," was the subject of books, a movie and countless military studies. Under AP's appeal, the command eventually released a copy with all but nine of the 73 pages completely blacked out. Most of the information remains secret, the command said, to protect military plans, weapons systems and the privacy of individuals involved.

In other cases, the government has revealed more. Just four months after Operation Eagle Claw, the failed attempt in 1980 to rescue 53 U.S. hostages in Iran, the Pentagon released an unclassified version of an investigation about what went wrong. The forward to the 87-page report noted the importance of providing as much detail as possible to the American public.

More recently, the National Security Archive, a private research institute at George Washington University, waited three years for the government to hand over records describing the military's initial plans for invading Iraq. A series of slides, prepared under the codename Polo Step, showed that war planners believed in August 2002 that the U.S. would have only 5,000 troops left in Iraq by December 2006.