Palin 'vengeful,' says author who moved in next door 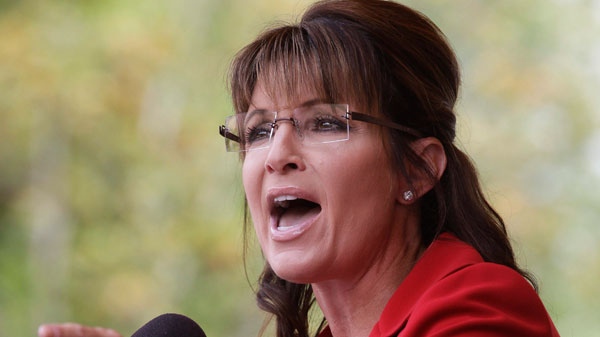 Joe McGinnis's new book "The Rogue: Searching for the Real Sarah Palin," hasn't won him any new friends in the Palin camp, and has likely created more than a few enemies among her supporters.

The book takes a hard look at Palin and her husband Todd, digging into her upbringing, what he considers her "deep streak" of racism, alleged drug use, rumours of affairs and general all-around bad parenting.

It's not flattering, and that may be part of the reason the Palins have filed a lawsuit against McGinnis related to the book -- something he's not allowed to discuss.

"She sounds stupid and she is stupid, so that part is real," McGinnis told CTVNews.ca in an interview, when asked whether there's any truth to the old-fashioned, American values image that has been crafted for Palin.

"This folksy, family values kind of thing, it's just the opposite. She's not folksy, she's not warm, she's not personable, she's not just the girl next door. She's a vengeful, mean spirited, somewhat paranoid woman who's also a religious fanatic."

McGinnis' book starts out gently enough. He arrives in Alaska with plans to live in Anchorage for four or five months, but spend most of his working days in Wasilla, the home town of the former Republican vice-presidential candidate.

But shortly after he starts looking for a home he is fortuitously offered a place right next door to Palin's.

In fact, the Palins rented it for a time and Todd himself renovated the house, which is just feet from their own home.

"I move to a state two-and-a-half times bigger than Texas and I wind up living 15 feet from the subject of my next book. Forty years in the business and I've never had a piece of luck like this," McGinnis writes.

Shortly after moving in, however, McGinnis was confronted by Todd, who quickly recognized his name from an earlier piece he wrote about Palin, and wasn't happy about his reasons for being there this time around.

That night, Sarah posted a rant on Facebook about their new neighbour, which was instantly picked up by mainstream media. It suggested the 67-year-old McGinnis was spying on her nine-year-old daughter and even looking through her windows.

The posting triggered a firestorm of controversy for McGinnis. He quickly became the subject of heated discussions on right-wing talk radio, had media banging on his door and even received death threats.

Despite the less-than-warm welcome from the Palins -- who promptly erected a tall fence -- McGinnis set about his business of finding "the real Sarah Palin," conducting hundreds of interviews and following countless leads.

McGinnis had heard rumours that Palin had once been involved with an athlete who turned out to be now-retired NBA star Glen Rice. At the time, he was a visiting high school basketball player who met Palin (then Sarah Heath) when she was a reporter in Anchorage and he was in town for a basketball tournament.

McGinnis tracked Rice down in Miami, and asked him if he remembered the weekend he had met Palin.

"He said, 'Oh I remember that as if it was yesterday, she was special, I had a crush on her,'" McGinnis said.

He also asked Rice if he remembered Palin "freaking out" about it, as had been described to him by people who knew her at the time.

"He said, 'We stayed in touch for months afterwards and talked on the telephone right up until the time she got married six or seven months later.'"

McGinnis said Palin, the former governor of Alaska and former mayor of Wasilla, still draws a lot of water in her home state, and many sources would only speak anonymously for fear of retribution.

"A lot of people have said if you quote me by name at the very least I'm going to lose my job and it could get worse, look at the things she did to you, the things she said about you, and all you did was move in next door."

While he admits this isn't ideal, he said he only used information he could corroborate with several sources and often had to weed through rumours and innuendo that simply didn't turn out to be true.

As much as 80 per cent of the material he collected wasn't used because he was unable to meet that standard of corroboration, McGinnis said.

Still, the Palins have made it clear they are unhappy with the work. Palin's lawyer John Tiemessen recently sent a letter to McGinnis' publisher, threatening to sue over the book, which has faced tough criticism from several critics.

In a letter, Tiemessen said "The Rogue" contains lies and rumours disguised as truth, and attributed largely to anonymous sources.

Whether the book affects Palin's popularity has yet to be seen. And it isn't clear yet whether it will matter when the 2012 election rolls around. Palin has been ambiguous about whether she plans to throw her name in the hat for the Republican presidential nomination.

McGinnis, however, said he believes Palin has decided against it.