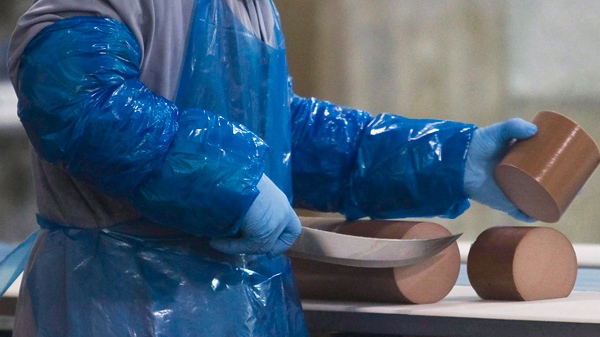 Option Consommateurs, the country's largest consumer organization, and the union representing the inspectors said the government has yet to determine how many people it needs to ensure safe food and to figure out if a new inspection system actually works.

They said the government has yet to act on the key recommendations produced by a special investigation into the tainted-meat crisis -- a charged denied by Agriculture Minister Gerry Ritz.

Ritz said the government has given more resources to the Canadian Food Inspection Agency and "put more inspectors on the ground than ever before" since the listeriosis crisis.

The outbreak, traced to contaminated cold cuts from a Maple Leaf Foods plant, killed 22 people and sickened many more.

Sheila Weatherill, who was appointed to investigate the tragedy, called for a tough evaluation of the system.

That hasn't happened, the union says.

"Six months after Sheila Weatherill's report, the Canadian Food Inspection Agency efforts to improve have been hamstrung by the absence of political will and commitment to improve on the part of the federal government," said Bob Kingston, president of the Agriculture Union of the Public Service Alliance of Canada, representing food inspectors.

Anu Bose of Option Consommateurs said the outbreak shook consumer confidence in food safety: "The absence of any visible action six months after the Weatherill report will do nothing to repair this."

However, in an email statement, Ritz said the government "responded quickly and concretely" to Weatherill's report by "moving forward on all 57 recommendations and immediately investing $75 million to improve Canada's food safety system."

Weatherill's report, among other things, found that the new inspection system needed "critical improvements related to its design, planning and implementation."

"Ms. Weatherill found that there are too few inspectors covering too much territory, hobbled by a new inspection system that never worked properly," Kingston said

He said the food-inspection agency hasn't even started work on changes.

"The inspector shortage is as acute as ever and we continue to be hobbled by an inspection system that is deeply flawed."

With Parliament prorogued, there is little that consumers can do to pressure the government, he added.