Ottawa firm on refusal to fund abortions in Third World 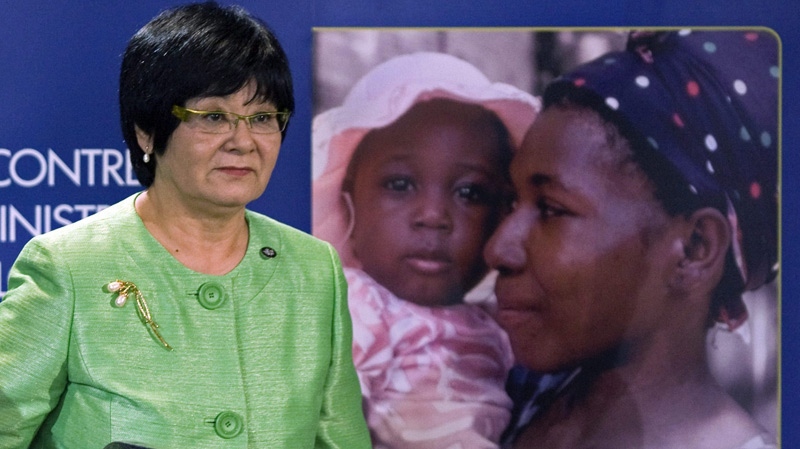 International Co-operation Minister Bev Oda heads from a media availability at Pier 21 in Halifax on Monday, April 26, 2010. The Conservative government says it won't fund abortion as part of its G8 child- and maternal-health plan for poor countries. THE CANADIAN PRESS/Andrew Vaughan

OTTAWA - The Harper government insists it hasn't backed down from its refusal to fund abortions in Third World countries.

International Co-operation Minister Bev Oda appeared to muddy the waters Thursday when she said Canada would indirectly support abortion in countries where the procedure is legal.

"As long as it is legal within the country and it's a legal procedure . . . if we were asked to help in that way, we would do that," the Ottawa Citizen quoted Oda as saying.

The report suggested Oda is willing to finance "abortion infrastructure." And it said she's poised to renew funding for International Planned Parenthood, which provides counselling on the full range of family planning and reproductive health issues, including abortion.

Her comments seemed to mark a stunning about-face for the government, which last spring said abortion would definitely not be part of Prime Minister Stephen Harper's G8 initiative to champion maternal and child health in the world's poorest countries.

But Harper spokesman Dimitri Soudas denied the government has had a change of heart.

"Our child and maternal health initiative is aimed at saving the lives of children and mothers," Soudas said in an interview.

"We've been clear that we will not be funding abortion."

Jessica Fletcher, a spokeswoman for Oda, said the minister's comments were "taken out of context and misrepresent the government's position."

"Canada has never directly funded abortion in developing countries. Further, our government has been very clear that abortion will not be funded under Canada's G8 initiative," Fletcher added.

Fletcher also said it's "inaccurate" to suggest the government is on the verge of re-funding International Planned Parenthood.

The government's position on family planning and abortion has been plagued by confusion from almost the moment Harper announced his $1.1-billion maternal health initiative last January.

Initially, the government maintained the initiative had nothing to do with abortion, repeatedly stressing somewhat ambiguously that it did not intend to reopen the abortion debate in Canada.

Foreign Affairs Minister Lawrence Cannon sparked an outcry in March when he declared the initiative "does not deal in any way, shape or form with family planning."

Oda was forced to eventually clarify that family planning would be considered as part of the initiative but not abortion.

The position was widely criticized by non-governmental organizations that work in developing countries as well as by some of Canada's G8 allies, including U.S. Secretary of State Hillary Clinton.