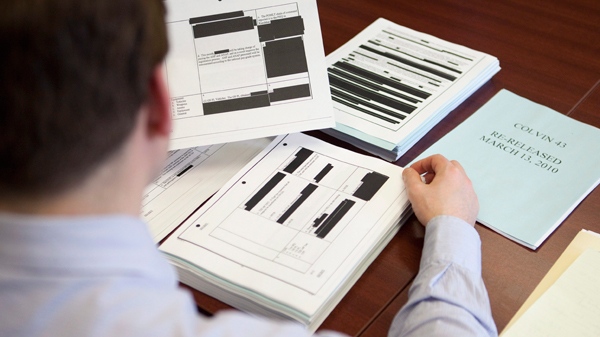 A reporter reads over one of the very few copies of an Afghan detainee document tabled by the Tories in the House of Commons on Parliament Hill in Ottawa, Thursday, March 25, 2010. (Sean Kilpatrick / THE CANADIAN PRESS)

OTTAWA - Opposition leaders worry an election-averting deal on disclosure of Afghan detainee documents may be unravelling as the parliamentary clock runs out.

The four parties struck an agreement in principle two weeks ago and set May 31 as a deadline for putting the details down in writing.

But that deadline has now passed without a written agreement.

Negotiations made some progress Tuesday, according to insiders, and are to resume Wednesday.

Prior to Tuesday's meeting, NDP Leader Jack Layton and Bloc Quebecois Leader Gilles Duceppe said they're beginning to worry the government may be spinning out talks until June 23 -- when the House of Commons is scheduled to start a 12-week summer break.

Once the Commons is not sitting, opposition parties would not be able to force the Conservatives' hand by threatening to move a motion finding the government in contempt of Parliament.

It was that threat of a parliamentary showdown that compelled the government to negotiate the agreement in principle, allowing MPs access to sensitive documents regarding the alleged torture of prisoners handed over to Afghan authorities by Canadian soldiers.

Duceppe echoed that sentiment: "I mean, we're still worried about that because I don't have very much confidence in that government and in that party."

Liberal House Leader Ralph Goodale said he won't "push the panic button just yet," adding that he thinks the government is still negotiating in good faith. However, he said he'd be very concerned if talks drag into next week.

"Yes, we need to take the time to get this right but it cannot be a stalling tactic that is aimed at defeating the whole purpose of this," Goodale said in an interview.