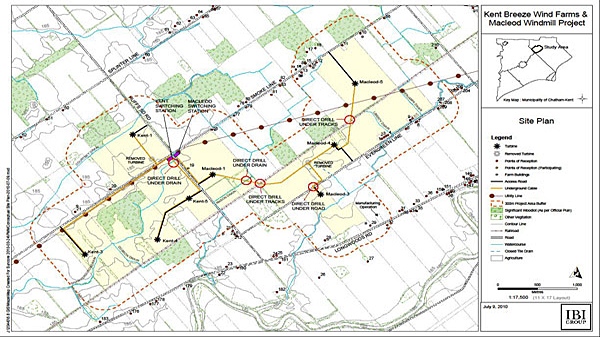 An map of Suncor's proposed wind farm in Chatham-Kent is shown. (Courtesy of Suncor Energy)

TORONTO - Opponents of Ontario's use of industrial wind turbines to generate electricity are hoping legal action will stop any more wind farm projects until scientific studies are done on possible adverse health effects.

The Society for Wind Vigilance says people who live near new wind power projects in Ontario report sleep disturbance, headaches, difficulty concentrating, irritability and fatigue. There are also other symptoms reported including dizziness or vertigo, tinnitus and the sensation of aural pain or pressure.

"We have really a living laboratory now in Ontario of wind developments where there are enough people who have reported adverse health effects that there is a place where science can be done," said society spokeswoman Beth Harrington.

"There is an opportunity here, and we think the government should seize it."

A Toronto Divisional Court will hear a case starting Monday that calls on the court to strike down the portion of the government's Green Energy Act that sets a 550-metre distance between wind turbines and any home.

A week later, an Environmental Review Tribunal will start hearing witnesses into a proposed wind farm by Suncor in Chatham-Kent.

The two cases will provide an opportunity to inform the general public about problems with wind farms, said Harrington.

"What the society is hoping for is a sober second look at the 550-metre setback from homes and families, that we are saying is too close," she said.

"We don't know how close too close is at this point. What we do know is that we have people who are suffering terrible consequences as a result of wind turbines that are too close."

There are 700 wind turbines in Ontario now, a dramatic increase from the 10 that existed in 2003.

The country's two largest wind facilities are in Ontario, in Shelburne and the Wolfe Island Wind Farm near Kingston, Ont.

Energy Minister Brad Duguid said he's got to rely on the advice of Ontario's Chief Medical Officer of Health, Dr. Arlene King, when it comes to the health effects of wind farms.

"She's the expert on these things, in my voice the voice of reason, and she's got the medical expertise to make these judgments," Duguid said in an interview.

"She says there is no credible evidence to suggest that there are health impacts as a result of wind turbines."

One thing Ontario does have plenty of evidence on is the dangers to health from burning coal to generate electricity, which costs the province $3 billion a year in health care costs, added Duguid.

"Moving away from coal will reduce respiratory illness significantly," he said.

However, the opposition parties say they too would like to see scientific evidence showing the wind turbines have no adverse effects on people's health.

The government continues to encounter resistance to wind farms because it's not answering the questions that people continue to ask, said Progressive Conservative critic John Yakabuski.

"We called for a moratorium on any new wind developments until such time as that kind of (health impact) study was completed by a third party," said Yakabuski.

"Also we would return the decision-making power back to municipalities with respect to whether or not they would welcome those kinds of developments in their communities."

People are suffering, said Harrington, but the Ontario government is ignoring their concerns and plowing ahead with more wind farms.

"Isn't it interesting that the citizens of Ontario have to go to court to protect their own safety," she asked.

The wind power opponents say if they are successful in getting the court to strike down the 550 metre setbacks for wind turbines, the ruling would likely affect most new wind projects in the province.