Ont. band Walk Off the Earth has viral YouTube hit 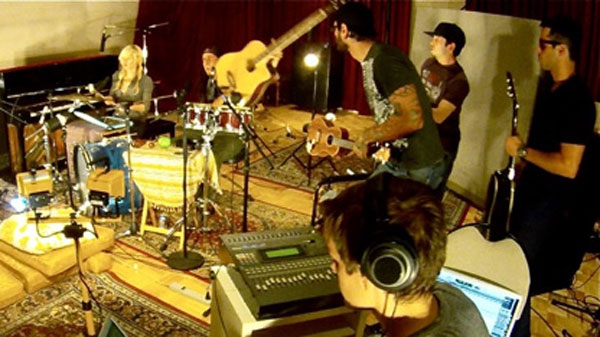 Members of Burlington band Walk Off The Earth appear in this undated photo from their Facebook page. (Facebook)

TORONTO - Online videos all-too-frequently get classified as "viral," but no one can dispute that Burlington, Ont.-based band Walk Off the Earth has hit it big.

Even YouTube itself has declared that the independent band's cover of the song "Somebody That I Used to Know" by Goyte is the viral hit of the week.

In the video, the band performs the song with five members all clutching and playing the same acoustic guitar. One taps the guitar's body for percussion, while the others strum, pluck or hold down strings.

Links to the hit were retweeted by the likes of Russell Crowe and Alyssa Milano.

The cover has cleared 16 million views and has given a boost to the band's other videos too. YouTube says in the span of about a week the band had more than 20 million views overall.

Other unique covers by the band that have surpassed the one-million-view mark include renditions of "Someone Like You" by Adele and "Party Rock Anthem" by LMFAO.

The band also found itself at the top of the iTunes Canada singles chart with the "Somebody That I Used to Know" cover.