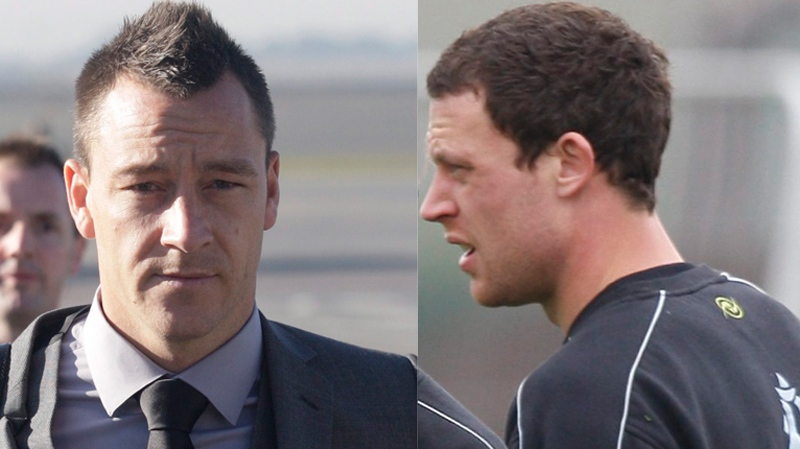 While some people may indeed watch this month's World Cup for the soccer, that's not actually the only reason to tune in. The off-the-field hijinks of some of the game's biggest stars will make for a great sideshow, even for those who don't know their Ronaldo from their Ronaldinho.

With one England star bedding another's girlfriend and the French team embroiled in an underage prostitute scandal, the tournament will be just as riveting without the soccer (or futbol, for you aficionados out there).

In case you've been reading the sports page only for, you know, the sports, here's a World Cup primer ripped from the scandal sheets.

Getting their Jollies in England

Details of the affair between Terry, who married wife Toni in 2007, and Vanessa Perroncel, a lingerie model, were splashed across the British tabloids for days, including allegations that Perroncel became pregnant during the affair and Terry forced her to have an abortion.

This was not by a long shot Terry's first time cheating, and Bridge and Perroncel reportedly split months before the affair. Still, the sordid details left the English squad in turmoil. Manager Fabio Capello stripped Terry of his captaincy and Bridge removed himself from consideration for the World Cup team.

Months later in a strange twist, Perroncel, who had remained silent as the scandal broke, denied having a sexual relationship with Terry in an interview with Grazia magazine. But the British media took her protestations with a mountain-sized grain of salt.

As for England's on-field chances, the tabloids had worked themselves into a tizzy speculating that the scandal would irreparably damage team morale -- and compromise its chances of reaching the final. While that furor has died down, the Guardian newspaper recently bemoaned that this year's World Cup team is the oldest the country has ever entered in the tournament. The team's average age is 28.7 years.

Staying in England (who says the British are boring?), it was also this spring that Football Association chief and head of England's 2018 World Cup bid Lord Triesman stepped down from both jobs amid allegations of referee-bribing and an affair with a former aide.

The scandal broke after The Mail on Sunday posted audio tapes secretly recorded by Melissa Jacobs, Triesman's 37-year-old former aide, as the two had drinks at a London pub.

On the tapes Triesman, 66, alleges that Spain and Russia planned to bribe World Cup referees in a deal designed to improve Spain's chances in the tournament and help boost Russia's 2018 bid.

"Spain are looking for help from the Russians to help bribe the referees in the World Cup," Triesman says on the tape. "(Spanish Football Association) votes may then switch to Russia."

The scandal has seriously threatened that bid, and also possibly ruined the career of a highly respected former Labour minister. It's also raised the spectre of corruption at one of the world's most-watched sporting events.

Not to be outdone by the philandering players, Jacobs also released dozens of text messages she claims are evidence of a six-month affair with the married Triesman.

Despite the saucy messages, Triesman claimed the two were just friends who did nothing more than kiss on the cheek.

"A private conversation with someone whom I thought to be a friend was taped without my knowledge," Triesman said when he announced his resignation.

'That same friend has also chosen to greatly exaggerate the extent of our friendship. In that conversation I commentated on speculation circulating about conspiracies around the world. Those comments were never intended to be taken seriously."

If a soccer star snogging his best-friend's girl or an affair with a younger aide are nothing more than a big yawn on your personal scandal scale, how about getting caught with a woman who is not your wife and is also underage?

Earlier this spring, word broke that French police were investigating an alleged prostitution ring at Paris's Café Zaman, a club on the famous Champs-Elysees, and were interviewing French soccer stars in connection with the case -- including Bayern Munich and French national team star Franck Ribery.

His lawyer has claimed Ribery, considered one of the best players in the world, is merely helping police with their probe. However, unnamed police sources have revealed that Ribery, who converted to Islam to marry childhood sweetheart Wahiba, admitted to sleeping with prostitute Zahia Dahar but denied knowing her true age.

In France, soliciting sex with an underage prostitute carries a maximum three-year prison term and a C$61,000 fine.

Dehar quickly jumped to the players' defence, saying she had lied to them about her age and they "should be left alone."

While the French media at first bemoaned the scandal as a mortal blow to France's World Cup hopes, the daily newspaper Liberation reported the investigation is on hold until after the tournament.

But the call-girl brouhaha makes the French team one of the most scandal-plagued heading into the World Cup.

Soccer fans cried out for a France-Ireland rematch after a Thierry Henry handball helped get the French through to the big show.

And days ago, France's minister for sport, Rama Yade, criticized the team for staying in one of South Africa's most lavish hotels: the Pezula Resort, a five-star residence with private beach on the Indian Ocean.

"I expect France to dazzle us with its results rather than the flashiness of its hotels," Yade sniffed. "I have called on them to be decent at a time of crisis."

Jabulani is Zulu for ‘Terrible'

While German engineering is usually considered a good thing, the ball Adidas has developed for the tournament, named the "Jabulani," has been met with widespread disapproval. While Jabulani means "to celebrate" in Zulu, late last month, players gave the German-designed ball their own names, such as "terrible" and "weird."

"It moves so much and makes it difficult to control. You jump up to head a cross and suddenly the ball will move and you miss it," Pazzini complained.

The widespread criticism, which was largely levelled by players who don't have multi-million dollar sponsorship deals with Adidas, surprised the company, which said the ball has been tested and praised by most professionals, including Major League Soccer players. The company said the ball will take getting used to because it's at the heavier end of FIFA's regulation weight range.

The company also pointed out the moulding technique will allow the ball to retain its shape despite taking a pounding by the world's best players. It's also seamless, so won't retain any water in the event of rain.

"There will be goals scored from 45 yards at this World Cup," Hahnemann said. "They will be called great goals but they won't be great goals, it's just the ball."